ATLANTA UNTRAPPED: Rap fans are in for some holiday treats 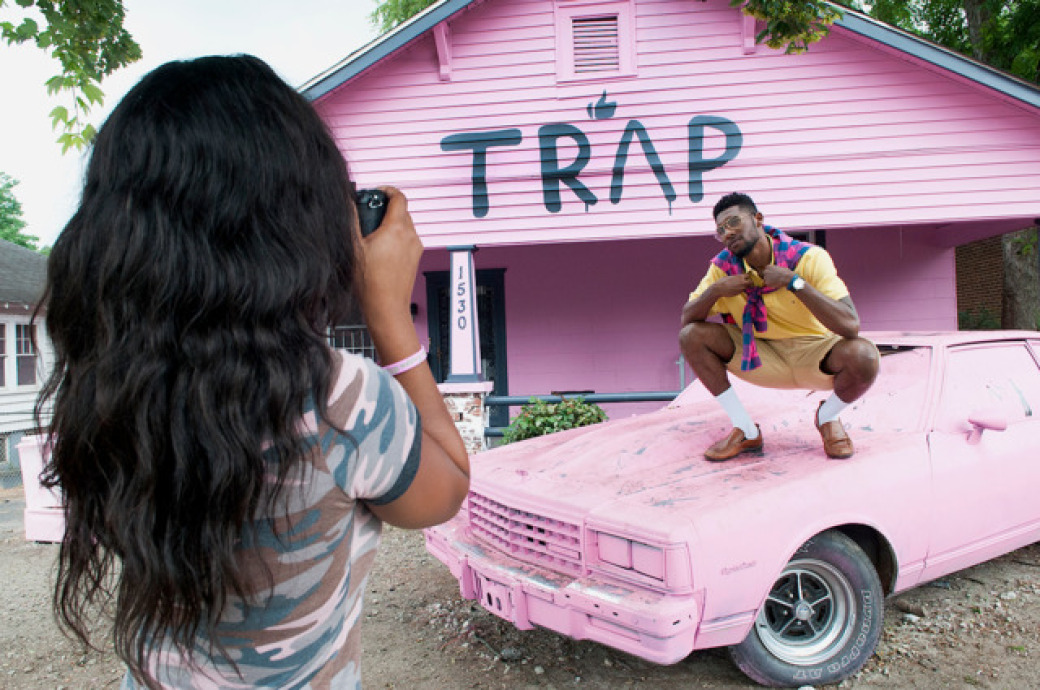 Earlier this summer, during the original run of the Pink Trap House, I spoke with a mentor and former journalist about the temporary Atlanta landmark. He expressed concerns regarding the images on social media of people posing in front of a stove outside of the pink home. Were we becoming desensitized to the origins of trap music, a Southern genre of rap music known for its 808s and tales of drug dealing?

There’s always a fine line between documenting and glorifying but, regardless of criticism, the genre has made its way into mainstream culture. Rappers like T.I., Gucci Mane, and Young Jeezy have built empires by vividly depicting what goes on inside of a trap house and how they triumphantly made it out.

When my mentor voiced his concerns, I listened to what he was saying, but I didn’t give it much thought after the conversation was over. In addition to providing great photo opportunities, the Trap House had also hosted HIV screenings, church, and other positive community services. The rapper wasn’t just promoting his new album, he was giving back to his community.

Last week 2 Chainz announced that the Pink Trap House had returned in a major way. Trap Wonderland features a new pink home, the pink car that fans dented by jumping on it over the summer, 2 Chainz’s pink wheelchair that he used during his summer tour after breaking his leg, a Christmas tree, a gingerbread house, a merch table and more.

Located at 1740 Defoor Place, near the rapper’s Street Execs Studio, Trap Wonderland is open seven days a week from 5-10 p.m. through December. Admission is $10, and all proceeds go to charity. Forget heading to see Christmas lights this season, 2 Chainz’s Trap Wonderland has been promoted as a “family-friendly” attraction that is perfect for this holiday season. But can something that evokes trap imagery really be “family friendly?” Can community service wipe away the negativity associated with the trap?

During an interview with 11 Alive, 2 Chainz said Trap Wonderland is allowing the city to see that “a trap doesn’t have to be a negative connotation.”

To be clear, this is a brilliant marketing strategy and I’m happy 2 Chainz has found a way to expand it beyond its original run. Trap music’s roots in Atlanta are strong. An annual Trap Wonderland would be popular, and as fans visit, it will no doubt boost the rapper’s celebrity and motivate them to visit the merch table where sweaters featuring a dabbing Santa and Pretty Girls Like Trap Music are for sale. Whoever came up with this idea is really, really good at their job.

Still, the diverse group of people cheerfully visiting the Trap House does make me feel a bit uneasy. How many of these people have had to face the harsh realities of what actually occurs in a trap house? In bringing trap music to the mainstream, have they gentrified the trap house?

Full disclosure: I recently wrote an entire essay on how drug addiction has eliminated almost all of the men in my family. I obviously have personal feelings about glorifying the trap. And, sure, I’m being a bit hypocritical to even think of criticizing this when I’ve rapped “cooking up dope in a crockpot” more times than I can count this year. I couldn’t relate to a single line in Migos’ “Bad and Boujee,” but it felt like an anthem nevertheless.

Like many rappers, 2 Chainz is indeed a family man. The father and husband isn’t trapping out of anyone’s bando, a term used by rappers such as Migos and Young Thug to describe an abandoned home that has been converted into a trap house. He’s grown and has successfully capitalized on his misfortunes. By bringing Christmas and HIV screenings to his Trap House, 2 Chainz has showed that he can turn a negative past into something that benefits his community.

I just hope Trap Wonderland encourages people to have some tough conversations after they’re done taking their lighthearted pictures for Instagram.

The Grammys got it (mostly) right this year and that’s not something I say often. But nothing makes me happier than seeing Atlanta artists Migos, 6lack, and Chidlish Gambino secure major nominations.

It should come as no surprise that Migos secured their first two Grammy nominations this year. Rapper Offset will go up against his fiancé Cardi B in the “Best Rap Performance” category with “Bad and Boujee,” and the Atlanta trio will compete against Jay-Z, Kendrick Lamar, Rapsody, and Tyler, the Creator for “Best Rap Album.”

Using his rap moniker Childish Gambino, Donald Glover has been nominated for two Grammys before, but this time it feels like he might actually leave the awards show with a trophy in-hand. He’s nominated for five awards this year: "Record of the Year," "Best Traditional R&B Performance," "Best R&B Song" (“Redbone”), "Album of the Year," and "Best Urban Contemporary Album" (Awaken My Love!)

The rapper is up against East Atlanta newcomer 6lack’s Free 6lack in the "Best Urban Contemporary Album" category. 6lack’s “Prblms” is also nominated for "Best Rap/Sung Performance." Ultimately I think the competition will prove too stiff for 6lack to pull off a win in either category, with the latter including nods to Jay-Z and Beyonce (“Family Feud”); Kendrick Lamar and Rihanna (“Loyalty”); SZA and Travis Scott (“Love Galore”); and Goldlink, Brent Faiyaz, and Shy Glizzy (“Crew”). Still, it’s pretty amazing to see him nominated for his first project.

All three of these artists have left their imprints on R&B and hip-hop this year. Even if they don’t win, that won’t soon be forgotten.

Rahbi will bring his eclectic soul to Aisle 5 on Sat., Dec. 16. The Atlanta artist will be joined by Hero the Brand, Jaye Newton, and more.