West End gets a motorcycle-themed watering hole (with tacos!) at the Beltline's zero-mile marker 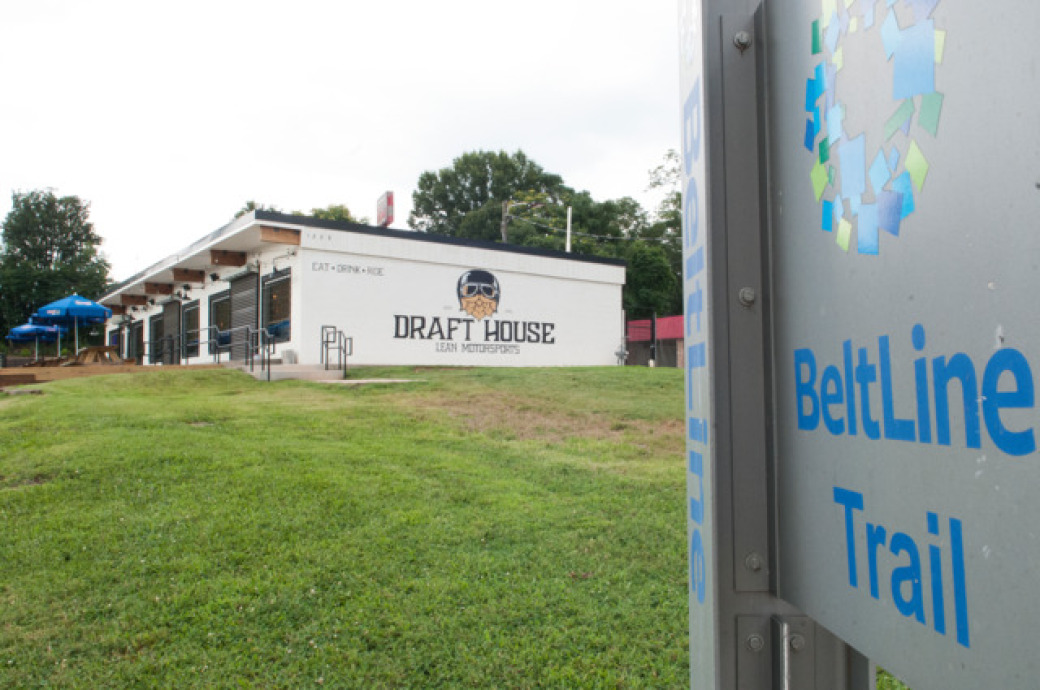 There's no question that businesses along the Atlanta Beltline's Eastside Trail, like Ladybird Grove and Mess Hall and King of Pop's brick-and-mortar, have been enjoying wild success. For better or for worse, it was only a matter of time before similar eateries popped up along the forthcoming Westside Trail. Beltline spokeswoman Jenny Odom told Curbed officials are "aiming for September" to officially open the new stretch. Ready and waiting at the Beltline's zero-mile marker across Hopkins Street from Gordon White Park in historic West End is Lean Draft House.

Since opening June 16, the beer-heavy taco joint has maintained a dull roar of hot bodies, and for good reason. Lean starts to fill a bit of a dining-and-drinking void in the Southwest neighborhood. Though the area is famous for transcendental vegan and raw food, there aren't many bars around that don't necessitate jumping on the interstate. In addition to 20 beers on tap all of them local, including the coveted Creature Comforts' Tropicalia which was never out during any of my six or seven visits thus far Lean features a stacked cocktail menu and full bar. House specialities are $9 each and include the Jon Snow with herb-infused gin and egg whites, the Basil Lean with whiskey and angostura, and the Exotica Vol. 4, a spicy-sweet blend of pepper tequila, lime, mezcal, hibiscus syrup and aperol. It's a welcome, wet oasis in a neighborhood where previously, denizens didn't have a lot of other options for drinking outside their own porch.


However, the new watering hole is still undergoing the occasionally painful growing pain, namely when attached to its identity and aesthetic. Large blue umbrellas loom over bench-style seating on Lean's porch, making way for entering the cinderblock structure, vigas jutting out just below the room. On a recent visit, iconic electronic track "Sandstorm" blared from outdoor speakers. Inside, vintage European motorcycles dot a wall with related paraphernalia sprinkled among shelves and such. Lean also retails motorcycle apparel and gear, and screens Atlanta United games at the bar.

It sounds like a bit of a clash because it is. While it's great that Lean serves local brews and took the initiative to hire within immediate neighborhoods, it doesn't seem like the bar has a tight handle on its own identity.

With new restaurants, it's always safe to assume early days are experimental, with menu items and cadence shifting to sate whoever ends up being the main clientele. In this instance, the latter is diverse every day; a mixture of West End residents as well as diners hailing from Adair Park and even further east. Those who predicted the spot would be a beacon solely for young white homeowners new to the area have been proven wrong. There are families, single diners, large groups of middle-aged people there to watch the game, and so on.

WHOLE HOG: There is a retail section at the Lean Draft House featuring motorcycles and apparel for sale. | Joeff Davis

An early iteration of the menu featured the delicious and filling Power Up Salad ($7), with ingredients like edamame, kale, chickpeas and queso fresco, all tossed in a fresh citrus vinaigrette. Since then, it's been renamed the Best End Salad, upgraded with slightly more luxurious items like avocado and shrimp, and repriced to $12. There's also a tostada salad with ground beef ($12) and a beet and kale salad for $9.

The tacos Lean's main attraction past its lengthy beer list are available in seven varieties, including two vegetarian options (one of which, the cauliflower for $3.50, is vegan). Served in no-frills metal trays lined with wax paper, tacos are priced individually. They automatically come ensconced in warm corn tortillas, though flour are available for a small upcharge.

The Nashville hot chicken taco ($3.50) comes smothered in a spicy, buffalo-esque sauce that neatly skates a thick fried breading, though the chicken itself is dense and a little dry. Ultimately and unfortunately, dryness permeates most of Lean's tacos. The Korean-fried cauliflower, topped with a laudable dollop of vegan kimchi, could still use a sauce of sorts, or perhaps a little guac for lubrication. The fish al pastor ($4) and shrimp ($4) suffer similar fates; they taste fresh and thoughtful but perhaps a little rushed in execution. The avocado taco ($3.50) is a stand-out exception, thick slices of medium-firm avocado tempura-battered and fried, joined by red cabbage, cotija and cilantro salsa; it packs a zesty bite with some malleability. Sometimes it's a little tough to justify Lean's price tags for the quality, but for we locals it's kinda like buying a bagel at the airport a sort of convenience fee, a toll for skipping the jump onto I-20 for dinner.

The yuca fries ($5), salty and served with a side of chili lime mojo mayo, pair well with a crisp draught pour; an ideal snack for semi-late night munchies (Lean closes at 11 p.m. every night besides Sunday, when they are closed all day). Pro tip: Order the queso ($6, or $7 with chorizo), but dip the fries instead of the chips. You're welcome.

Lean is early into its tenure and apt to keep evolving. For now, things look promising: it's an early adapter to a soon-to-be popping area, catering to thirsty as well as snacky folks, and even nodding to the sweeping subway tile trend in both of its single-stall bathrooms.

It could be an easy fix to upgrade for Lean. It already has a lot of heart. The staff is kind and helpful and stools stay occupied. Add a few table sauces or salsas, screw a couple more purse hooks at the bar, and for the love of Atlanta rethink the standard soundtrack. Then? Well, Lean Draft House could elegantly glide into that heroic haven neighbors have been hoping for.