The Hanging Judge and the power of individuality 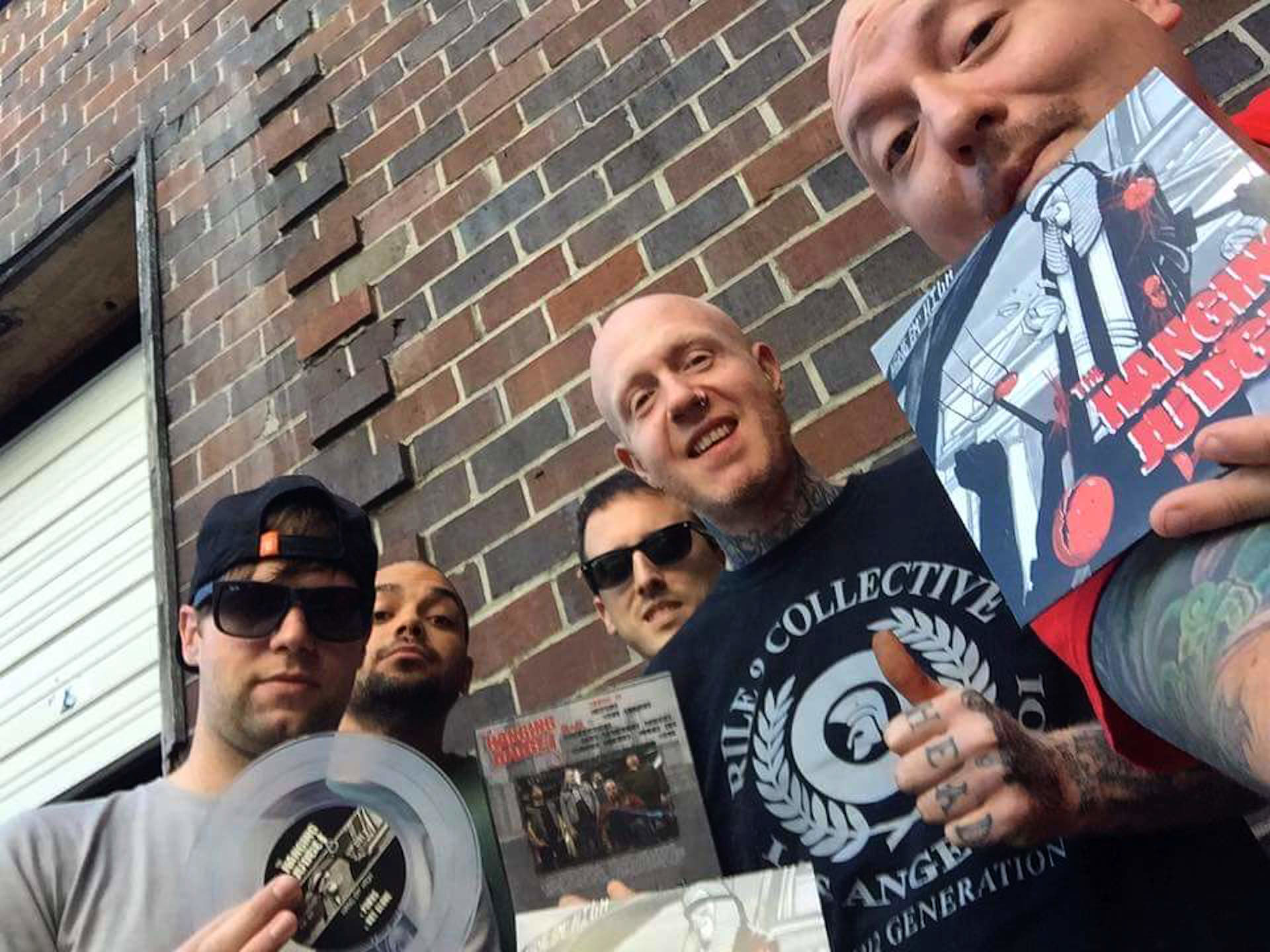 Big choruses, catchy melodies, punk harmonies and thoughtful lyrics crafted in the name of political outrage are the order of the day with the arrival of the Hanging Judge's Hang ???Em High 7-inch EP. Taking a break from playing guitar in Atlanta street punk stalwarts the Antagonizers ATL, Richard Henderson fronts a new group featuring guitarist Chris May of the Queers, rhythm guitarist Austin Whervin, drummer Justin Hall and bass player Jeremy Paul. Before taking the stage for a record release party on June 8, Henderson and May sat down to talk about how they got involved with music, politics, and the power of individuality in the era of social media.

How did you become a musician?

Richard Henderson: As long as I can remember, I've always wanted to play guitar. When I was five years old my grandfather owned a pawn shop on Jonesboro Road in Blair Village by Lakewood Heights. I saw a Les Paul hanging on the wall and a Marshall stack. I said to my dad, "I want that." He said "No, you'll fool with it for five minutes and be done." For years I begged them to let me play till I was 12 and they finally bought me a guitar. I sat in my room and played along to old Metallica records.

Years later I played in a bunch of little garage bands that never had names. The first real band I was in was a ska band, the Skatamatic Weapons a ridiculous name, I know. That was 1994-ish. We played shows with Aquabats, the Toasters. We played the Point once, the Wreck Room, but mainly at the Masquerade.

Chris May: Metallica taught me how to play, too. I saw a music video when I was little and thought, "I want to do that!" I got a guitar from Toys"R?۝Us, learned how to read tabs and started picking along. I joined some teenage punk bands and progressed from there. Never took any lessons. The first band I was in was called Shootin' Blanks.

Richard, stylistically, what's the difference between what you do with Antagonizers vs. the Hanging Judge?

RH: With two guitars you always have more of an arsenal to make melodies. Everyone in Hanging Judge grew up listening to a lot of Screeching Weasel and Queers records, so we've got that melodic flow. Of course, the biggest difference is I'm singing instead of playing guitar. I'm not one for crowds; I prefer being the guy in the back observing everyone and everything else. Now I'm in a place where everyone is looking at me. When we played our first show I didn't know what to do with my hands when I wasn't singing. But I got used to it real quick, I've learned to have fun with it. It can be strange when the crowd is dead and there's no energy to work off of. You have to act your way through it.

The songs on the Hang 'Em High 7-inch are in the oi, street punk mold, but your voice creates a different sound and tension something unique to this band.

RH: I try not go with the monotone grunting that you hear everybody do, I want it to be rough and raw, but I want it to have its clean moments and its ups and downs. I try to sing it the best way I possibly can without sounding too cliche.

CM: We do a lot of backup support with the melodies, too. Melody is a big part of the sound that we want, and with that gruffness in Richard's voice it creates a balance. We went to Dragon's Den to record a demo, "Pawns." Within about 10 minutes of posting that song we had a record deal.

The lyrics in "Pawns" embody something of a contrarian political view you're not supporting the left or the right when it comes to American politics.

CM: We're not a left wing band and we're not a right wing band, we call things as we see them. We are very anti Nazi, but at the same time, people are so quick to call out anybody that disagrees with them as a Nazi. We came up with this project amid the last presidential election, and we were feeling a lot of dissatisfaction over the choices we had, and everything else. The songs are very politically driven.

Couching the situation in such a way the left is just as bad as the right will draw angry criticism, but punk has always been about having the confidence to stand behind your beliefs no matter the cost. In the age of social media, however, a contrary position is easily misconstrued as something more sinister.

RH: Everyone gets bent out of shape if you don't agree with them. Be outraged. Be mad. But during the election we had two sides of the same coin. What drives us is outrage over the wrong things. You hear so much "he said, she said," but there's a homeless guy standing 10 feet away from where we're talking right now. He can't afford to eat. That's something to be outraged over.

CM: I understand outrage over the guy being drug off of the plane, but look at what else is going on at the same time. We're on the verge of World War III. Last month the United States dropped "the Mother of All Bombs" on Afghanistan. There is so much going on to be outraged over right now. If you listen to our song "Emergency," I think we're due for a rude awakening. We're all about to be shaken out of our comfort zones.

Richard: It seems like someone is throwing a lot of distractions at us, taking our attention away from a lot of bigger picture issues.

In the midst of this all it does it seem like the role of punk rock is more important now than ever before?