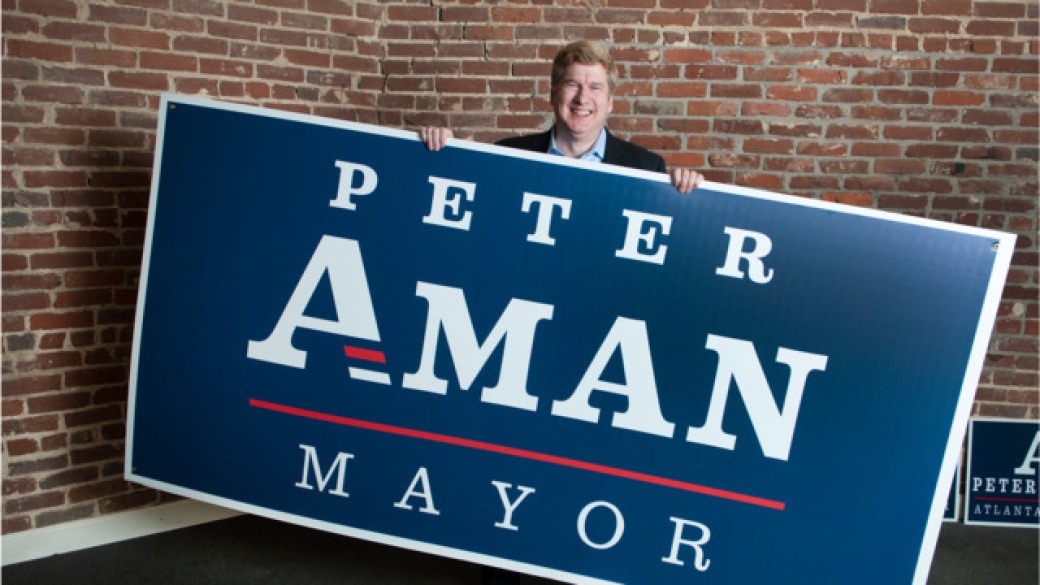 Editor's note: As the race for Atlanta's next mayor heats up, Creative Loafing will be sitting down with every major contender in an effort to replicate that awkward knock on the door from candidates and canvassers. Visit creativloafing.com for weekly updates on the impending election.

Peter Aman is not a politician. But the candidate for Atlanta mayor is something of a veteran at City Hall, and he's banking on his experience there to carry him in the race to replace Kasim Reed. "I'm the former chief operating officer of the city, so I've actually run the city on a daily basis for a number of years," he tells Creative Loafing.

The son of two elected officials, he says his upbringing fostered a fervor for local politics that, until now, has only been sated by his executive-level oversight of city systems. Yet his disconnect from the political sphere might be a significant selling point for his evolving campaign.

Aman's been a business consultant for years, both before and after he provided pro bono support for ex-Mayor Shirley Franklin and worked as Reed's COO. And he must have been pretty darn good at his job because he's loaned his campaign about $800,000 of the $1.7 million he's raised thus far. Because of his reputation as a Buckhead businessman, some people pin him as a Republican a no-no to some progressive Atlantans although he says he tends to vote blue.

If you get a rap on the door from Aman or his cronies on the campaign trail, they'll tell you he's mainly prioritizing public safety, mobility and education in his mayoral bid. He's hailed by many as the champion of Atlanta's 2011 pension reform plan, which, he claims, saved the city from the threat of bankruptcy and put retirement cash in the pockets of cops and firemen.

In a time of national unrest surrounding citizen-cop relations, Aman thinks Atlanta's police force is pretty well-behaved, relative to departments from other bustling urban municipalities in America. But, he says, there's work to be done, and the next mayor can't look at criminal justice reform solely through the lens of police behavior.

He also contends that the city needs to stunt its school-to-prison pipeline, a pattern of youths winding up behind bars a trend that's disproportionately afflicting young black people in Atlanta. In order to accomplish that, he says, Atlanta needs to bolster its educational opportunities so people of future generations will be more liable to land jobs than jail time. Along those lines, Aman wants to build a better bond with the Atlanta Public Schools system and enact early childhood development opportunities for children three and younger. "If you want a 20 percent or 30 percent drop in crime, you've gotta work on education, you've gotta work on criminal justice services, you've gotta work on reentry services for people who've been in prison," he says.

Aman is a supporter of APD Chief Erika Shields' push to deprioritize minor weed infractions, which have been packing the Atlanta City Detention Center with far more African-Americans than Caucasians, many times for nonviolent offenses. He wants to find a way to rehab drug offenders and focus on better appropriating charges for minor crimes some "quality of life" ordinances with milder punishments. Still, he'd like to boost the number of cops on APD staff. "I'd like to see us get back to over 2,000 police officers," he tells CL, "and really institute what I call compassionate community policing."

Aman says he's always been an advocate for police transparency and believes footage from body and dash cams should be turned over to the public "as soon as possible," as long as that sharing doesn't impede an ongoing investigation. "I can't think of a circumstance in which it would be months later that footage is released," he says.

What role does race play?

According to Aman, Atlanta's racial demographics can't be overlooked when talking about who's to be the next mayor, and he says, race needs to be part of the campaign dialogue: "It's one subject that, frankly, my opponents have been aggressive in avoiding."

He argues the conversation surrounding Atlanta's ever-changing racial makeup needs to include appreciation for the black mayors and elected officials of decades past. "I think it's absolutely critical that we recognize and pay homage to the legacy of African-American leadership in Atlanta," he says, noting that the city's had black mayors for the past five decades. "There are clearly African-Americans who are concerned about having a mayor who's ethnically different from the last 50 years of mayors, and I completely get that. We need to talk about what those concerns are."

Atlanta's next chief, Aman says, needs to be conscious that racism still exists, and that people police officers and politicos hold implicit biases that need to be addressed. If elected, he wants to capitalize on the accomplishments of leaders prior, such as Maynard Jackson, who innovated anti-discriminatory programs for Atlanta businesses. But the Equal Business Opportunity Program and the Disadvantaged Business Enterprise Program need some ratcheting up, and Aman says he's the guy to improve transparency and ethical standards.

He also says he's got some dirt on a few of his competitors who allegedly have checkered ethical histories at City Council, and he plans to trumpet that closer to Aug. 25, qualifying time for the real-deal candidates. Not to mention, he's painted himself as one of the mayoral race's most aggressive candidates, jabbing at high rollers in the polls, as well as contenders with track records of ethical misconduct.

Aman, like much of the competition, has ambitions of upping the city's affordable housing stock while maintaining a steady stream of development. And, while finding cheaper places for Atlantans to live, he'd like to focus on finding homes for the homeless, via increased shelter capacity and by making shelters easier to get into. But we'll flesh that out more as we near November.