'We ought to use police... when we are faced with mortal danger, not when we are uncertain' 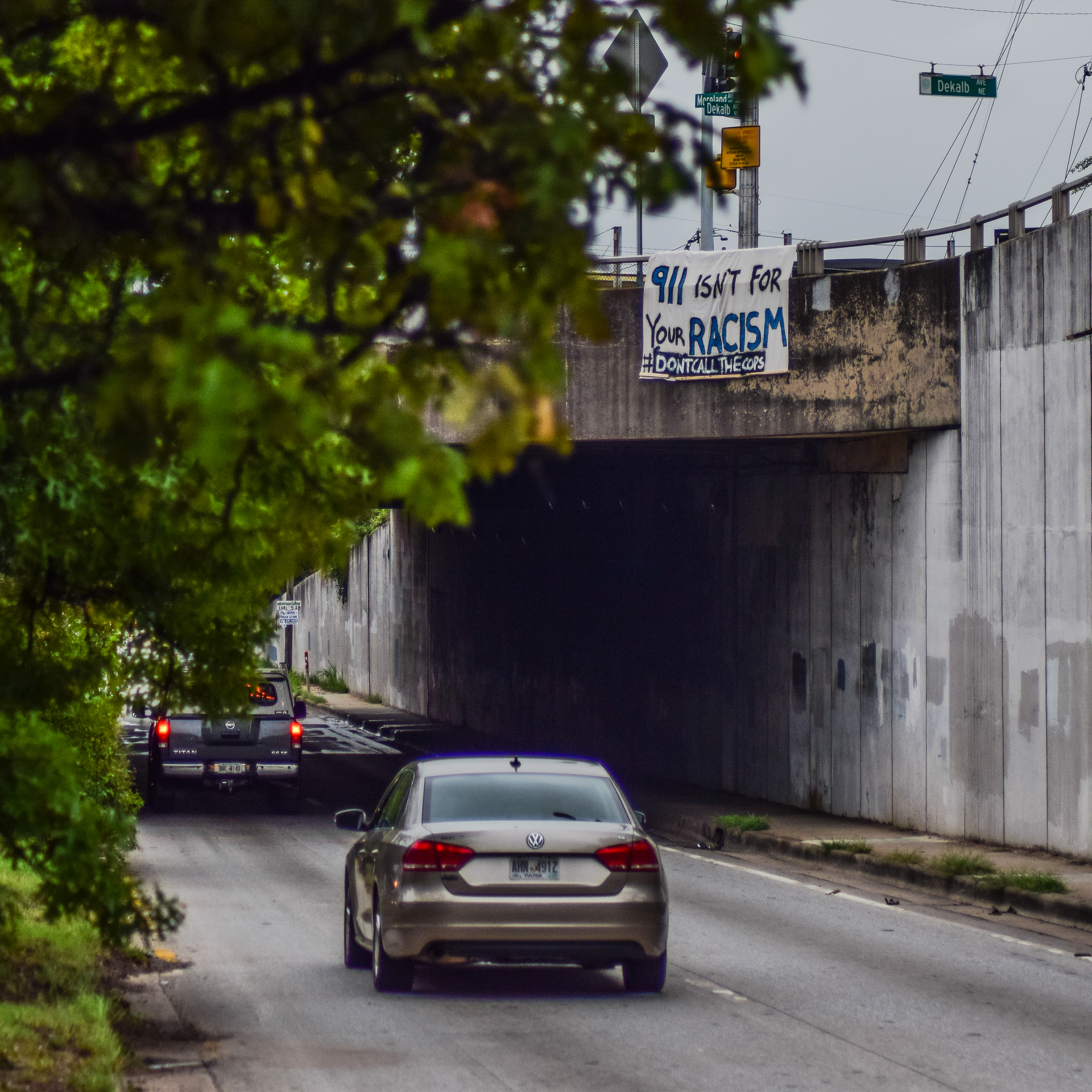 On a hot, muggy Monday, activists gathered on overpasses overlooking Freedom Parkway, I-20, I-85, Ponce De Leon Avenue, and other busy thoroughfares, and unfurled homemade banners. The message to motorists, cyclists, and pedestrians passing below: #DontCallTheCops.

The campaign was launched by a new group of activists aimed at addressing racial disparities in how police treat people of color. Jim Chambers, a community activist and core group member, says the campaign appeals to common sense. If it’s a domestic abuse situation, call the police. If it’s a home invasion, definitely call the police.

But if a person sees a black man walking down the street with a bike they think is nicer than the man can afford — a conversation that Chambers says he saw discussed on NextDoor — the group says they should not call 911. And if someone is yelling on a street corner and causing a scene, also don’t call 911.

"We ought to use police as a final resort, when we are faced with mortal danger, NOT when we are uncertain," the group's website says.

Not calling the police, the activists argue, diverts people from entering the criminal justice system. Chambers says it also minimizes the incarceration of black people “because quite honestly, police treat white people better.” The group also has posted resources on alternatives to calling law enforcement in non-violent situations.

“We’re saying that in this moment with the kind of training out there, the people who are running the force, the lack of community oversight, the lack of options for non-violent offenses, it’s just not safe to make that call right now unless someone’s life depends on it, no matter where it’s coming from,” Chambers says.

The banners were the “flash point” of the campaign’s launch, he says. (#DontCallTheCops was picked because it fit into a hashtag and could catch people’s attention.) The campaign is aimed at predominantly white and gentrifying neighborhoods. Chambers says #DontCallTheCops is essentially calling out white supremacy and racist motivations.

The campaign and the group were created in response to a call from the black organizing community after local protests teetered off in July. Chambers says the group stands in solidarity with black-led organizing groups and will “be available” when situations present themselves. Anyone is welcome to join, he says.

Chambers says the campaign and group’s priority isn’t to direct policy change but its demands are in line with groups such as ATL is Ready, a local collective that focuses on changing racial and economic inequalities in Atlanta.

Chambers says the group supports the city creating a mental-health response unit, which Chambers says Atlanta currently doesn't have, and creating a pre-arrest diversion program. A task force is currently designing such a program, which could be launched sometime next year. Chambers says another priority is restructuring the city’s Citizens Review Board. He wants to see board members elected to their positions, rather than appointed, and would like for the board to hold more authority with the APD.

Xochitl Bervera, director of the Racial Justice Action Center and a member of the  pre-arrest diversion program task force, says she thinks nobody should be in jail for jaywalking or sitting on the sidewalk.

“We don’t need to call the cops every time there is a public health challenge or every time there is a mental illness challenge,” she says. “We can build up other systems to handle those issues. And that to me is the most that will shrink the criminal justice system all the way around and attack the race disparities that we see now.”

Bervera says there are a couple of pilot projects in the works but nothing that is “holistic” or “fully funded.” Right now, she says, people can dial the state’s Crisis Hotline.

Nathan Dean, co-pastor of Edgewood Church and founder of Edgewood Security Patrol, says he thinks the blanket message borders on the extreme: “It’s kind of a pendulum swing to just say ‘let’s not call the cops.’” To Dean, the issue is not about racial profiling but being informed of what constitutes suspicious behavior. He argues people sometimes won’t call the police when they see suspicious behavior because they fear being labeled a racist or bigot.

“Anytime we use racial profiling one way or the other it causes problems. We have to stick to behavioral profiling. That’s the only thing that sticks out,” Dean says. “A better route would be to have more informed citizenry than trying to tell people to not call the cops.” He also says the people who call the police when they see something that makes them uncomfortable are “generally outliers of the stereotype of what we don’t want.”

Core organizers of #DontCallTheCops have been hit with blowback from users on social media. Chambers has taken most of the flack; people have criticized the validity of the campaign because of his family ties to the Cox media empire, which includes the Atlanta Journal-Constitution and WSB-TV.

The concept of telling people not to call police isn’t entirely new, Chambers says, but the Atlanta effort is the first time he’s seen it approached in this fashion. He says the group wants to see the hashtag spread across the nation.

“We want people to pop up and do this in other cities,” he says. “So I think from a PR standpoint, we’re talking to people on a national level. But as far as our direct activity, we’re focused on Atlanta.”

Chambers says 40 people have joined the group since the early August launch and allied organizations have tipped their hats to the campaign efforts.

A look at Southern Comfort's history and the regulars who have made it a divey draw for decades | more...
Search for more by Miranda Hawkins
[Admin link: Activists to Atlanta: 'Don't call the cops']

Spider for Activists to Atlanta: 'Don't call the cops'