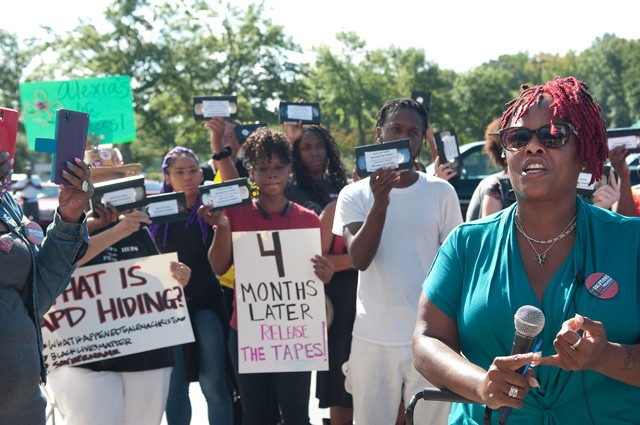 Photo credit:
>> In April 2015, 26-year-old Alexia Christian was shot and killed by police in Downtown Atlanta. Christian, who was in custody for an alleged car theft, had been handcuffed and placed in the back of a cop car. Police say she got out of her cuffs and began shooting at the officers, causing them to fire back. After nearly 18 months of waiting, dashcam recordings from the incident have finally been released. "None of this is visible in the released footage, which shows the view out of the front windshield of the car. Gunshots are audible, however, after the sound of a struggle. A man shouts 'put the gun down' repeatedly and a woman responds saying 'I don't have a gun.' More shots are fired and a woman is heard whimpering. Fulton District Attorney Paul Howard declined to press any charges back in July. Howard has said Christian was not searched for a weapon before being placed in the police vehicle."

>>An online petition has amassed more than 4,000 signatures in favor of renaming Donald Lee Hollowell Parkway, the street formerly known as Bankhead, Carlos R Walker Parkway in honor of late Atlanta rapper Shawty Lo. The King of Bankhead died Sept. 21 in a car crash on I-285.

>>One Atlantic Center, the towering Midtown skyscraper topped with a copper pyramid at the corner of 14th and West Peachtree streets has been sold to Starwood Capital Group. "Starwood did not disclose financial terms of the deal. But as first reported by Atlanta Business Chronicle in July, Starwood was expected to pay about $300 a foot, or about $330 million for the 1.1-million-square-foot tower."

>>Hurricane Matthew is barreling through the Caribbean with 120 MPH-plus winds. It's already hit Cuba and Haiti and is headed toward Southern Florida and the East Coast. "Forecasters predict it will be a Category 4 hurricane by the time it brushes up against the East Coast — including Florida, Georgia, South Carolina, and North Carolina — sometime between Thursday evening and Saturday."

>>Does Mike Pence he know he's running with Donald Trump? Someone told him, right?