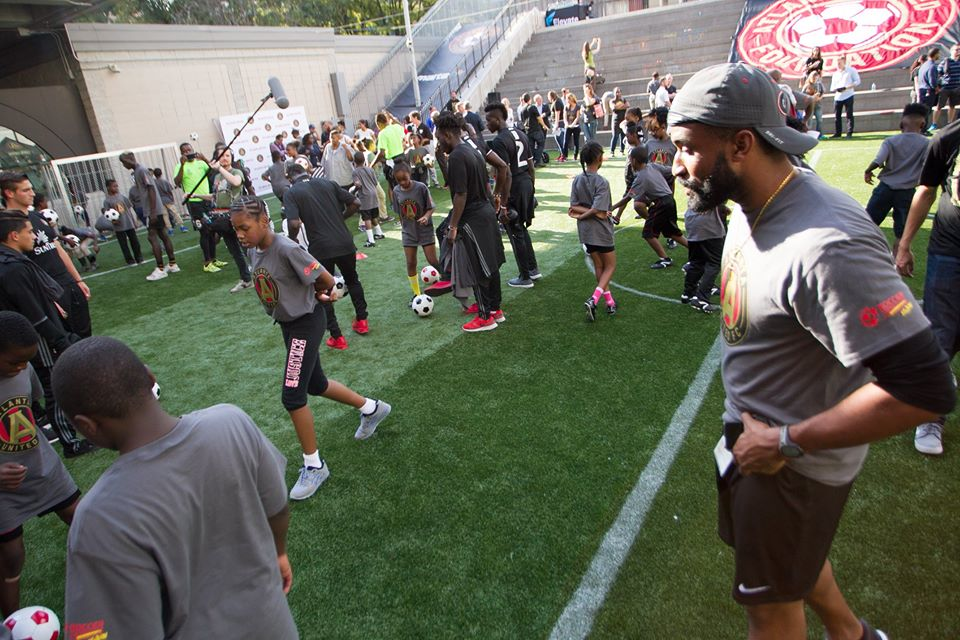 Downtown and Midtown Atlanta might seem like a strange place to hear someone scream “goal,” but that’s quickly becoming less and less true.

Soccer in the Streets and Atlanta United F.C., the city's Major League Soccer team, on Thursday officially unveiled Station Soccer at MARTA’s Five Points station with a private ceremony. Soccer in the Streets, a nonprofit organization that helps connect young people in underserved communities with the sport, will use the 66 foot by 99 foot pitch, thought to be the world's first soccer field in a transit hub, to carry out its program and boost Atlanta's soccer community.

Over the past few weeks, crews have turned the fenced-off area into a mini-soccer field with soft turf and metal goals designed by SITS Executive Director Phil Hill and built on Edgewood Avenue. Overhead lighting has been provided by  the same company that handled lighting for the 2016 Olympics in Rio de Janeiro. Plans call for an innovative classroom, music, and artwork, as well.

SITS leaders hope want the field to be used for social programs connecting young people in low-income neighborhoods to the game, as well as community events and adult rec leagues. They envision kids from North Fulton taking the train to play pick-up games in Downtown with players from Clarkston or West Atlanta. And it's not just young people — SITS wants to create a transit-oriented soccer league and build support for mini-fields at 10 other MARTA stations. League pre-registration is open.

Portable Dragon Goal turf soccer fields will be set up on the Centergy parking deck for the event (Don’t worry, there’s a top net provided so there’s no danger of accidentally raining soccer balls on those crossing the street below.) Players will compete in three-on-three games, playing two seven-minute halves with a two-minute halftime.

Sons of Pitches expects more than 1,000 participants, so if you’re interested in playing, you’ll want to sign up now. The tournament takes place Friday to Saturday, November 4-6.