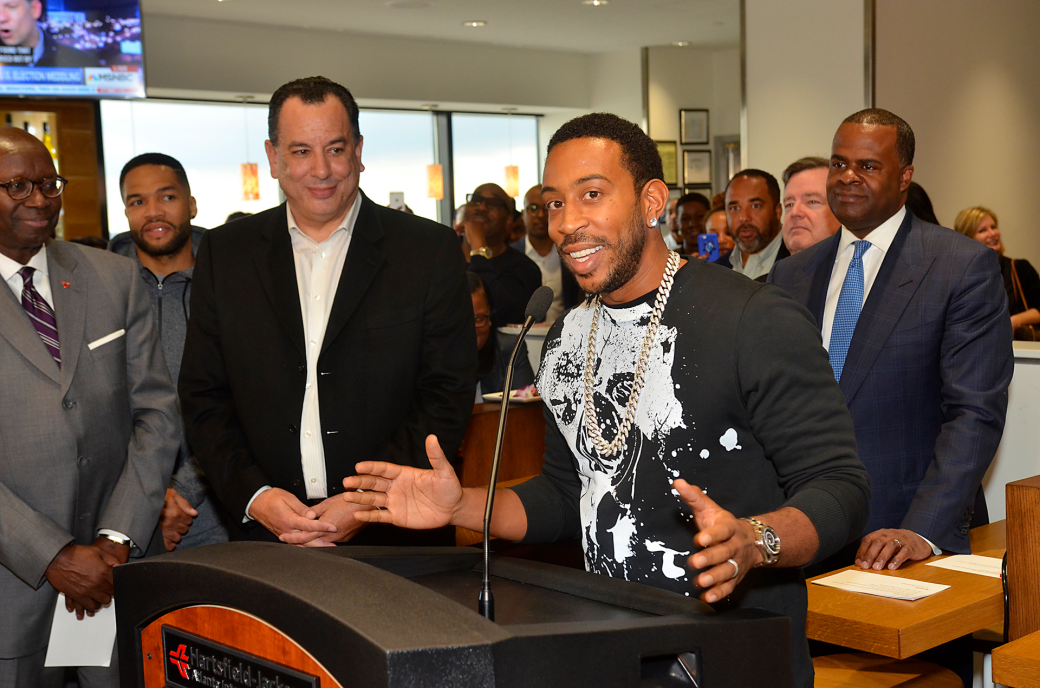 Two decades ago, an 18-year-old Atlantan named Chris Bridges moved out of his father’s place and into an apartment complex off Riverdale Road. The move was strategic: he’d heard through the grapevine that Hartsfield-Jackson Atlanta International Airport would be expanding soon, meaning the people who lived near it would get paid to move out. A year or two later — kaboom.

“I won’t disclose the amount of money they tried to offer everybody to move out, but that was my first business plan,” he said. “It’s funny how things come full circle.”

Luda has been hinting at a hometown restaurant named for his third LP ever since Chicken-n-Beer dropped back in 2003. In early 2012, the concept began to look like a reality when, after much heated debate, the city controversially approved more than $3 billion in airports concessions contracts for 150 new businesses. Chicken+Beer was one of them. The same week brought news that Ludacris’ Midtown Singaporean restaurant, Straits, would be closing down.

Normally I skip promotional debuts: the crush of TV cameras, the stilted speeches, the thumbnail-sized food samples. But I’ve been bumping Luda anthems since I was literally 13, and the chance to see the mayor and other local bigwigs officially inaugurate a restaurant named after an album that featured tracks such as “Hoes in my Room” and “Blow It Out Yo Ass” proved too delightful to pass up. 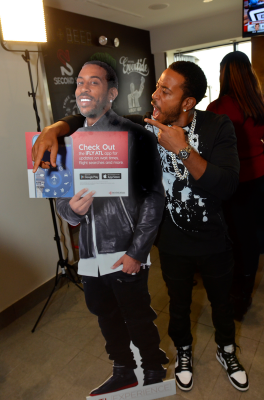 Arriving at the international terminal, I was greeted by a life-size cardboard cutout of Ludacris directing me to the security checkpoint. For the record, even when invited to the airport by Luda himself, you still have to take off your shoes and submit to a TSA pat down.


Chicken+Beer is located in Concourse D, alongside other local concepts like Grindhouse Killer Burgers and Terrapin Brewery. The 90-seat space is modern and unfussy, with flat-screen TVs and multi-colored light fixtures hanging from the ceiling. A black and white mural featuring musical notes, skyscrapers, and peaches dominates the back wall.

The large picture window behind the well-stocked bar looks out onto the runway. Here, you can watch planes taxi while sipping boozy slushies ($12.50 each — remember, it’s still the airport) or choose from an impressive beer and cocktail selection managed by former H. Harper Station owner Jerry Slater. Eight local drafts on tap ($6-6.75) include uncommon finds like Wild Heaven’s Wise Blood and Eventide’s Dry Irish Stout.

Waiters during Monday’s opening circled the room with trays of beer, champagne and mini versions of apps ($6.99-$13.99) and mains ($14.99-24.99). Despite the usual misgivings one has about celebrity-backed restaurants and the airport, their offerings are pretty impressive. Crawfish and corn fritters were moist and meaty, their sweetness counterbalanced by roasted red peppers, scallions, and a dollop of spicy lemon aioli. Cheddar grits came topped with well-seasoned bites of shrimp, smoked bacon, tomato, and spinach. Catfish, battered and fried, sat prettily atop corn edamame succotash with corn relish and a delicate parsnip puree. Then, of course, came Luda’s famous chicken and pecan waffles — brined 24 hours for maximum juiciness, drizzled with whiskey maple syrup, and impossible to eat politely even if you’re mid-conversation with the family of late Atlanta mayor Maynard Jackson.

In many ways, Chicken+Beer shares DNA with One Flew South, Jackmont Hospitality’s first independent airport concept, where Richards was once founding chef, Tabb chef de cuisine, and Slater GM. As the first American airport restaurant to be nominated for a James Beard Award, it set a solid precedent, and Chicken+Beer already seems poised for similar success.

“It has been a long time coming and when I say long time I mean a long time,” said Luda at the podium. “But anything that’s worthwhile usually does take a long time.”

He added that his ultimate goal is to expand Chicken+Beer into a global concept.

After the official ribbon-cutting, which included Mayor Kasim Reed, airport and Jackmont executives, and several giant pairs of scissors that somehow made it through TSA, I managed to get about 60 seconds of face time with Luda himself. He was friendly and didn’t seem to judge me too harshly as I unprofessionally babbled about my fandom-since-middle-school and posed for a photo.

“Uh, what’s your favorite thing on the menu?” I asked, suddenly remembering my duties.

“Come on, Luda’s chicken and waffles!” he replied. “It’s the whiskey syrup that makes it good.”

Chicken and dumplings is the ultimate cold weather comfort food, but in the hands of veteran chef Zeb Stevenson, what appears to be a simple, familiar dish becomes soulful with one bite. Stevenson braises whole pastured birds and slow simmers his stock for richness, adding strips of tender chicken, carrots, celery, parsley, and thyme to the thick broth. Dumplings are steamed to order so they... | more...
Search for more by Hilary Cadigan
Food & Drink Home