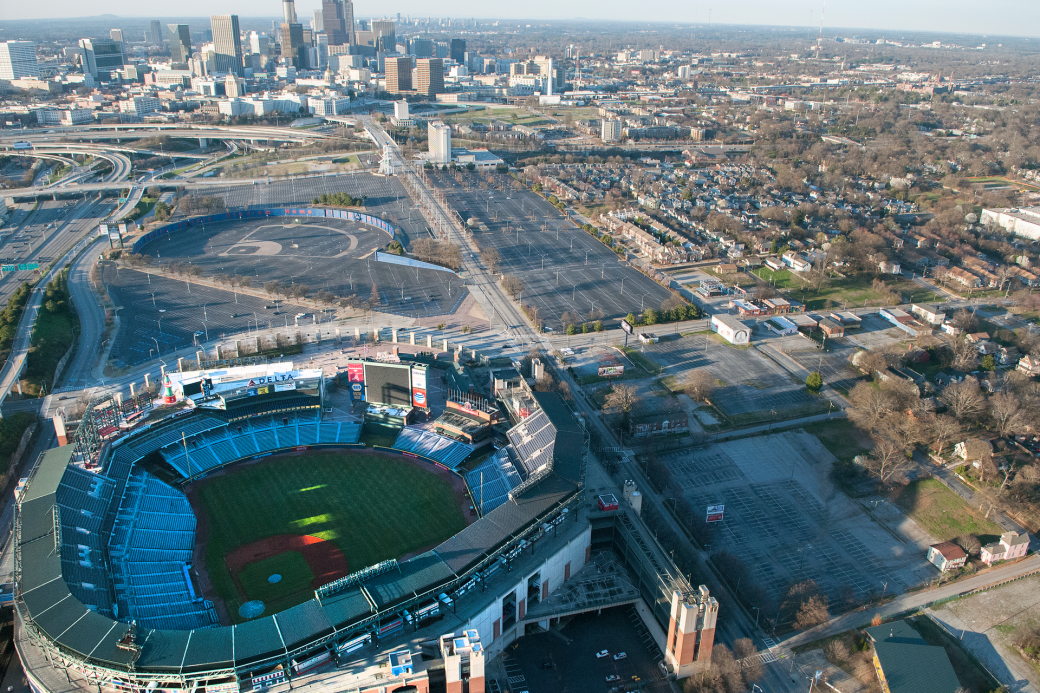 Photo credit:
After three years of negotiations, Turner Field now belongs to Georgia State University, and some neighborhood advocates aren’t happy that the $30 million deal was finalized without a binding community benefits agreement.On Jan. 5, the school and its development partners, Carter, Oakwood Development, and Healey Weatherholtz, took control of the 67-acre plot that houses the Atlanta Braves’ former ballpark and a sea of parking lots. Georgia State plans to erect yet another athletic stadium right next to Turner Field, and Carter’s joint venture will build residences, restaurants, and retail shops.But activists from the Turner Field Community Benefits Coalition don’t want the proposal built until Turner Field’s new owners commit to maintaining affordable housing options, ensuring education and job opportunities for locals, and creating an oversight committee to keep developers in check during the process.Without the proper safeguards, stadium area growth could spike property values and taxes, pushing longtime residents out of their homes, according to Tim Franzen, a TFCBC member and activist for housing affordability. The coalition includes residents from Summerhill, Peoplestown, Mechanicsville, and Grant Park, though some neighborhood associations have pulled their support in past months.Franzen says the fight is far from over. “If it comes down to construction, folks are willing to do whatever it takes to make it clear that we’re not going to let unauthorized development happen in the neighborhood without some community input and oversight,” he says, adding that supporters will find “creative ways to disrupt the construction” if necessary.Democratic state Sen. Vincent Fort, a candidate for Atlanta mayor who’s supported the agreement, says people leading the deal have cherry-picked community members to ensure the neighborhood input matches their development goals.“Georgia State and its partners were selecting people who agreed with them,” he says. “And when you have community leadership that disagrees with you, the method is to create and collaborate with those who will go along with your plans to gentrify the neighborhood.”Plenty of people involved in the stadium’s sale and redevelopment — politicians, neighborhood leaders, and other residents of adjacent and nearby neighborhoods — say the community has had ample opportunity to weigh in on the plans. And many of those people believe the changes slated for the area will ultimately benefit nearby residents.“Many of the naysayers are people who don’t live in our community,” says Suzanne Mitchell, former president of the Organized Neighbors of Summerhill. She’s been at the table with Georgia State University President Mark Becker and Carter CEO Scott Taylor to discuss the development’s effects on the community.Mitchell, a founding member of the coalition, says ONS left the group because some members seemed more focused on certain groups in the area receiving financial support. Some Turner Field neighbors think half the cash from the $30 million Turner Field sale should go toward helping the community, rather than helping to bankroll Philips Arena’s $192.5 million renovation.“We left because they’re taking more of a reparations approach, and we have this problem-solving approach,” Mitchell says.Mitchell, who says local leaders and developers already share many of the proposed agreement’s goals, says Georgia State and its partners are not responsible for curbing displacement near Turner Field. That burden falls on the shoulders of city officials, she says. “Carter and GSU can’t solve displacement here in Summerhill any more than developers could in the Old Fourth Ward when the Beltline hit,” she says, adding that inclusionary zoning could help.Keisha Lance Bottoms, who handles double duty as an Atlanta City Councilmember and head of the Atlanta-Fulton County Recreation Authority, which sold the Turner Field property, did not return CL’s request for comment. Bottoms, who’s also running for Atlanta mayor, told WSB-TV in August that “the redevelopment that’s going to happen in and around Turner Field quite frankly will be like nothing we’ve seen since Atlantic Station.”Such a sentiment frightens Franzen and his cohorts: “That is the nightmare,” he says. “No one wants to see another Atlantic Station. That’s even worse than Old Fourth Ward because it’s literally a corporate community.”However, Jimmy James, a real estate analyst and 17-year Summerhill resident, says he’s doubtful the stadium’s redevelopment will be anything like Atlantic Station’s “grandiose” revitalization. “We’re talking about Georgia State, a public, nonprofit institution that’s going to be controlling most of the land, versus Atlantic Station, which has always been a profit-generating venue.”James, who used to be Atlanta and Fulton County’s chief appraiser, also says the area will see an uptick in demand once the development is built. “The Georgia State and Carter deal, so long as they do what they’ve said they were going to do — some retail, some additional for-rent and for-sale market price housing — will benefit the entire community,” he says.


The coalition recently held an “emergency meeting” to hash out the plans to get an agreement signed before construction kicks off in February. Members, as well as other civil rights activists, will also rally at the Jan. 17 Atlanta City Council meeting to voice concerns about housing affordability, broken windows policing, and the city’s infatuation with stadiums, among other things.