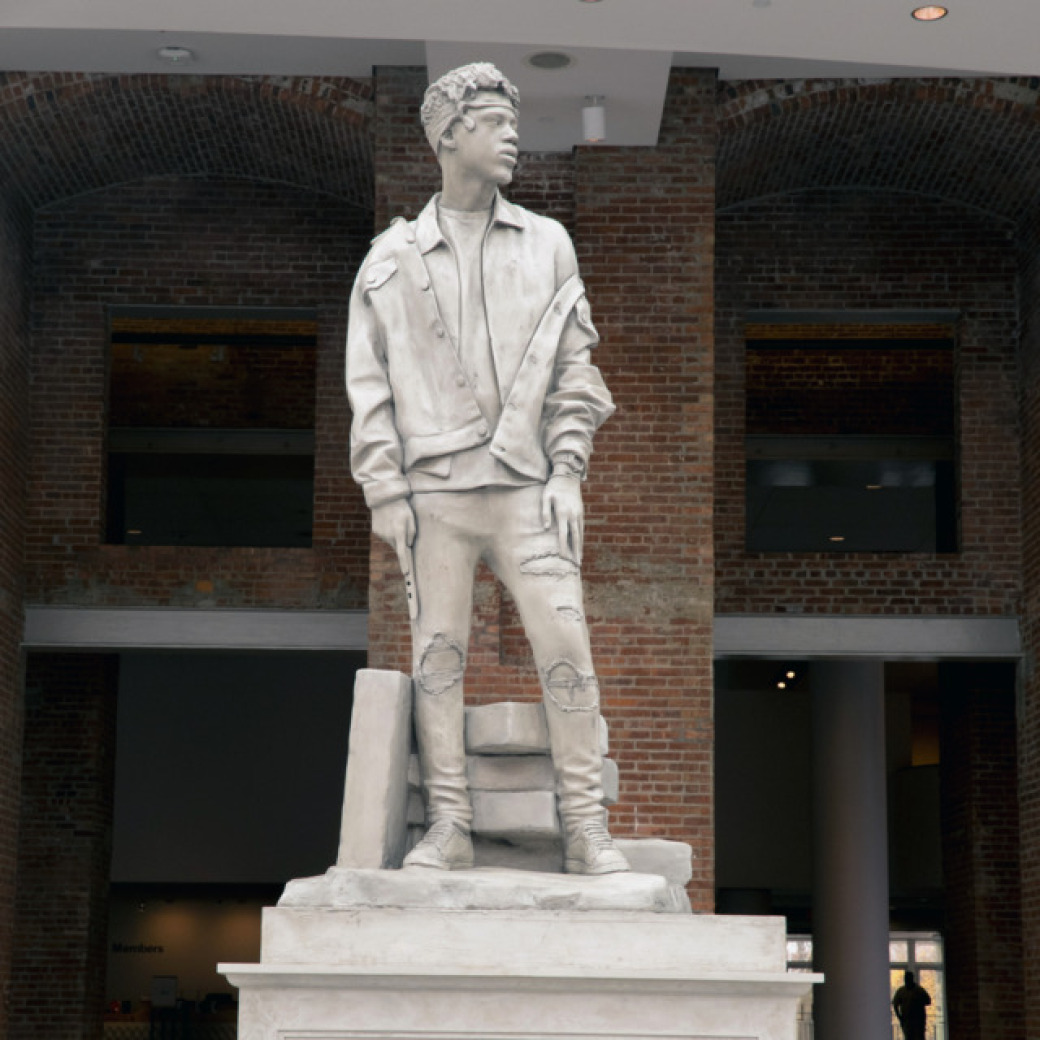 On the heels of producing such tremendous 2017 hits as Migos’ “Bad and Boujee” and 21 Savage’s “Bank Account,” Metro Boomin has fast become one of the most in-demand producers in hip-hop, so much so that his likeness has been immortalized in stone.

In December, Spotify’s curated hip-hop playlist RapCaviar canonized three of hip-hop’s newcomers — Greco-Roman style. RapCaviar Pantheon is a new project designed to honor rising hip-hop talent that pushes the art form to higher levels of cultural recognition. For it’s inaugural round, RapCaviar Pantheon pays tribute to the success of R&B singer and songwriter SZA, East Atlanta rapper 21 Savage, and, yes, Metro Boomin. With a series of Hot 100 hits, collaborative mixtapes, and Producer of the Year nods from the BET Hip-Hop Awards and BMI R&B/Hip-Hop Awards in 2017, the 24-year-old St. Louis transplant, born Leland Wayne, has earned every one of his accolades. Earlier this year, Metro Boomin also announced the launch of his record label, Boominati Worldwide, under Republic Records.

In spite of so much high profile activity and recognition, Metro Boomin remains a relative unknown outside of the rap world. Inside the business, however, he is a Southern rap deity. “The Romans built statues to their Gods, solidifying their legend in stone, but when we’re ancient history who is going to live on?” an ad for the Spotify campaign asks. “Some artists leave monuments behind.”

Fans could certainly argue that Metro Boomin’s contributions have been monumental. He helped 21 Savage, Migos, Future, and other rappers secure crossover hits, pushing each one to become a mainstream phenomenon while still maintaining trap star status.This year alone, his rap hits have solidified this new generation of trap in the streaming era.

In the Spotify video, Metro Boomin is referred to as “the architect, crafting the sound of a generation from the shadows.” His twisted hair hangs over his signature bandana, even in statue form. Later in the video, his frequent collaborator, 21 Savage, is called “the warrior, turning pain into poetry, while never turning his back on his past.” The three RapCaviar statues are currently on display as a part of an exhibit at the Brooklyn Museum.

Alas, there was no young Rodin, Michelangelo, or Donatello who can be credited for bring these artists’ likeness to life. For the project, overseen by the arts and communications agency SpecialGuest, Metro Boomin, SZA, and 21 Savage were photographed by computers to render a 3D map of their forms, which was later carved out by Kuka robots at Neoset Designs' fabrication studio. Each statue is carved from Venetian plaster, high-density polyurethane, and gypsum. Sadly, the statues were unveiled Dec. 7, and were available for public viewing for Dec. 8 only.

Metro Boomin isn’t a new producer. Since 2011 he’s worked with Atlanta artists, contributing to Jeezy’s The Real Is Back mixtape and OJ Da Juiceman’s Culinary Art School 2. His Future-delivered tagline “If Young Metro don’t trust you, I’m gone shoot you,” is featured on some of the rapper’s biggest hits, including  “Mask Off” (on the remix, although Metro produced both versions) and “Jumpman” with Drake. It’s also heard on Kanye West’s “Father Stretch My Hands Pt. 1.”

This year isn’t the first year Metro Boomin has stepped directly into the spotlight, either, but the producer’s single, “No Complaints” with Offset of Migos and Drake, was certainly an indication of his intention to increase his visibility. Without Warning, the collaborative mixtape with Offset and 21 Savage, features Metro’s menacing trap beats, over which the rappers create fantastical trap narratives. The album’s opener, “Ghostface Killers,” showcases all three artists at peak performance, offering a memorable hook from Offset and gruesome, matter-of-fact bars from Savage over an opulent  trap production. It’s the perfect introduction to a project with a Halloween-themed surprise release. Earlier this year, Metro co-produced “Bank Account” with Savage, featuring a deceptively innocent guitar loop and melody through which Savage attests to the amount of money and killers he has at his disposal. Months before that, he built upon a ‘70s flute sample for what would become Future’s “Mask Off,” creating the backdrop upon which the rapper would reflect on his use of pain pills.

Like noteworthy producers before him, Metro has found an admirable balance between showcasing his signature style and helping artists to cement their individual sounds.

Not all of Metro’s productions have given way to hits, however. Neither “Without Warning” nor his most recent release, Double or Nothing, with rapper Big Sean are wholly great. For an accomplished producer like Metro, delivering anything less than a banger is disappointing, and throughout portions of these projects, it feels like he phoned in his work. While Detroit rapper Big Sean has certainly had his share of successes, he is just as well known for the misses in his catalog as he is for the hits. For every “Pull Up N Wreck,” a standout track from Double or Nothing that features 21 Savage, there’s a “Savage Time.” On the latter, Sean raps “beat a white supremacist black, until that motherfucker hates his face.” Although it would certainly draw controversy regardless, the line probably wouldn’t stand out as a lyrical flub amongst rap fans if delivered by a rapper with better cadence and more credibility. Big Sean isn’t the only one who disappoints, though. Metro, who isn’t known for sampling, doesn’t deliver his best work on Double or Nothing. Perhaps he knew better than to waste his best beats.

Still, like his frequent collaborators, Metro Boomin has largely managed to keep his credibility in the rap community while achieving mainstream chart success. In November, according to Forbes, he had 10 songs on the Billboard Hot 100 at once. If anything, Metro’s success this year is solidifying what local rap fans have known all along: hidden behind larger-than-life rappers, a young Metro Boomin has been just as responsible for maintaining Atlanta’s status as a hip-hop capital in recent years as the artists who traditionally get all the praise. Now, he’s finally being recognized in a permanent way.

Rahbi brings his eclectic blend of modern soul and R&B music to Aisle 5 on Sat., Dec. 16. The Atlanta artist will be joined by Hero the Band, Jaye Newton, and more.

And last, but not least, B.o.B has been grabbing a whole new set of headlines as of late. As we all know, Bobby Ray is a much better rapper than he is a historian, or a scientist. Still, he is one of the self-made prides of Atlanta hip-hop. Check him out at Smith’s Olde Bar on Dec. 24.

Rising Atlanta rapper Decosi Fields joins bill with Rotey, T-Kay Jonez, and Easco at the Masquerade Dec. 28. The cover is $12. Bring a toy of equal value (and a receipt) for entry in lieu of ticket purchase.