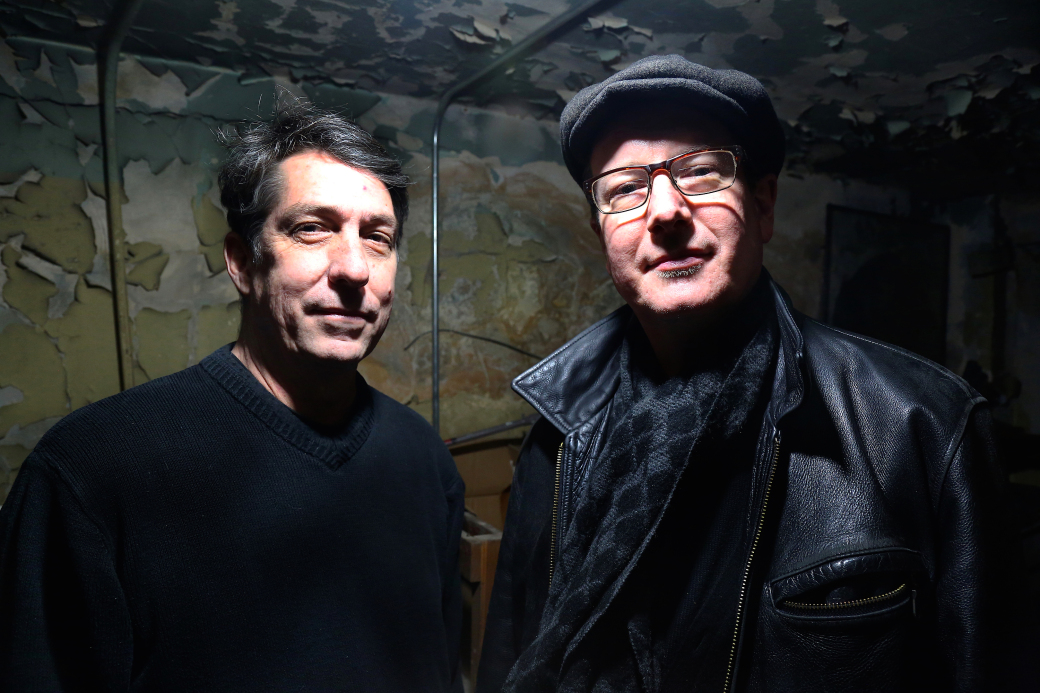 Frank Schultz exhales loudly over the phone from his home in Inman Park. The pauses between his words grow longer and more deliberate as he mulls over what truly lies at the heart of the music he creates as one-half of Duet for Theremin and Lap Steel.

Since 2006, the duo, featuring Schultz playing lap steel, along with theremin player Scott Burland, has spent countless nights on stages and in the studio exploring the possibilities of what could arise from the unlikely pairing of their namesake instruments.

Schultz chooses his words carefully. “Rather than taking an intellectualized thought process about it, I just thought maybe these two instruments would sound really good together,” he says in a matter-of-fact tone. “For about five or six years before Scott and I started playing music together, I had been on a quest — I had a goal to play a kind of music that I had never heard before. I reached a point when I actively stopped listening to anything on the radio, stopped listening to any records, or anything else, just so I wouldn’t be influenced by anything I might hear. When Scott and I started playing together, I thought, ‘I don’t know … Maybe?’ It wasn’t until about a year after playing our first show, when I realized that the goal had been reached.”

With a handful of CDs bearing Duet’s name, including their most realized offering yet, 2016’s 10, Schultz and Burland have developed a singular, improvisational dynamic. During live shows, their haunting distillations of harmony, dissonance, noise, and hidden musical dimensions take shape as long, sustained washes of sound as each instrument melds with the other’s ethereal nuances, creating a real-time emotional resonance from their exchange. Every performance is improvised, drawing inspiration from the faces in the crowd, the mood of the room they’re playing, and anything else that might contribute to the atmosphere conjured during their performances.

Throughout Schultz and Burland’s 12 years spent playing music together, both have settled into their roles as distinguished gentlemen of Atlanta’s outsider, avant-garde, and adventurous noise music scene. Together, Schultz, now 56 years old, and Burland, 55, have toured the Southeast, Midwest, and mid-Atlantic states, and collaborated with everyone from psychedelic folk and free improv guitarists Helena Espvall and Bill Brovold to Chattanooga’s old-timey avant-garde outfit the Shaking Ray Levis.

On March 22, Duet for Theremin and Lap Steel is traveling to Knoxville, Tennessee, to play one of the largest stages that such singularly creative music can occupy, the annual Big Ears festival. It’s the first time the group has been officially invited to play the fest.

From March 22-25 the festival boasts performances by such lauded acts as Diamanda Galás, Arto Lindsay, Roscoe Mitchell, Bang On A Can All-Stars, and fellow Atlanta-based gospel-soul post-punk quartet Algiers. Big Ears is a gathering where musicians and music connoisseurs celebrate a multihued universe of songs and sounds that resonate beyond the realm of commercial trends and expectations, while placing an emphasis on the personal aesthetics of each performer.

Landing on Big Ears lineup for 2018 is a high watermark for Duet for Theremin and Lap Steel, and the culmination of a musical journey that’s been more than a decade in the making. 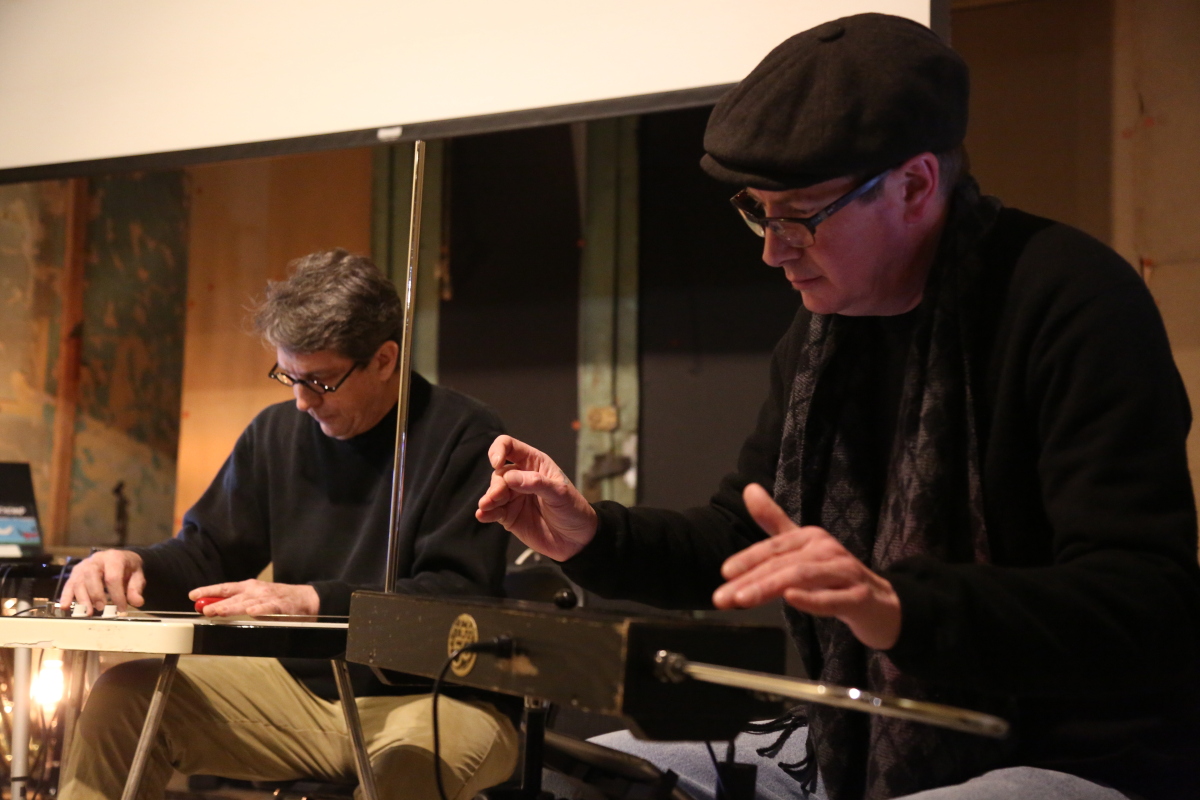 LIVE AT EYEDRUM: Frank Schultz (left) and Scott Burland of Duet for Theremin and Lap Steel. Photo by Brandon English

Burland and Schultz have known each other through the Atlanta music scene since the late ’80s/early ’90s, but they’ve only played music together since one fateful evening in 2006.

Throughout the early and mid-aughts, Eyedrum Art and Music Gallery hosted a Thursday night improv session that paired local musicians together in large and small ensembles for on-the-spot performances. During an ’06 campaign to raise awareness for Eyedrum’s activities, Thursday night improv sessions were held at the Atlanta Contemporary Arts Center.

It was there during one session, that Burland and Schultz were crowded onto a tiny stage as part of a large group improv set with nearly 20 musicians. The cacophony of so many unrestrained instruments was enough to drown out the delicate sounds coming from Schultz’ lap steel strings. And Burland barely had elbow room, let alone space to wave his arms around his theremin antennas.

“I remember looking over at Scott during that set and thinking jeesh, I can’t hear a thing he’s doing,” Schultz says. “And that’s when the idea hit me: We should try this with just the two of us.”

Soon after, Burland and Schultz started to convene regularly — at first, about once a month — in Schultz’s home studio to start experimenting with sounds, harmonies, noise, and dissonance.

The theremin is an electronic instrument designed by Soviet inventor Léon Theremin and patented in 1928. The instrument is best known for creating the eerie, haunted-house sounds of 1950s horror and sci-fi films, and is often thought to be behind the theme music from the original “Star Trek” television series circa Kirk and Spock. The Beach Boys also used a theremin-like instrument to create the psychedelic backdrop heard throughout their 1966 hit “Good Vibrations.”

The electric lap steel guitar is a much older stringed instrument that was electrified in the 1930s and is most often associated with traditional Hawaiian and classic country music.

Relying on wholly different means of play and tonality, these instruments were born worlds apart. But their non-fixed pitch qualities are secretly akin to one another.

Neither Schultz nor Burland had a working knowledge of their instruments when they started playing them. As a natural outgrowth of their approach, spontaneity with the non-fixed pitch qualities have played a key role in the evolution of how they play together.

At first, it didn’t seem like the theremin and electric lap steel shared much common ground. Schultz was running chopsticks and pieces of steel between the strings, and using various objects to draw more unconventional sounds out of his instrument.

“At some point Frank suggested I run my theremin through the same effects as his lap steel — a series of delays, reverbs, and I don’t remember what else,” Burland says. “But that’s what kind of blew everything up for us.”

After tapping into the potential of their treated instruments, in December 2006 Schultz and Burland booked a show at Eyedrum, opening for Washington, D.C.-based sound sculptor Layne Garrett. It was to be a one-off performance, taking their studio experiments to a live audience.

“When all was said and done, I was surprised by how much it actually didn’t suck!” Schultz says. “I remember looking over at Scott and saying, ‘I think we should do this again.’”

Burland recalls with equal reverence how strongly their performance was received.

“The audience was so excited post-show about what we did that we decided to keep going,” Burland says. “It was a great audience, you could hear a pin drop. And the audience included many Eyedrum regulars, including board members, who had some really nice comments.”

Since then, the two have spent more than a decade easing into their shared musical dynamics. It’s become their trademark to pull out a flask before each performance, toast the audience with a shot of bourbon, and dive headlong into the music.

Schultz and Burland’s personalities interact with each other, underscoring a sense of character that’s equally as engaging as the music they create. Each character is cut from equal parts life experience, refined taste, and punk rock ingenuity.

“Frank and I look at the world in a slightly different way, but we respect and appreciate each other's viewpoints, histories, and outlooks,” Burland says. “The differences also tend to irritate us from time to time. But we have so much in common, particularly in our musical tastes, and the common goal of Duet for Theremin and Lap Steel ultimately flattens out all that disagreement. We travel well together,” he adds. “We enjoy each other's company, and when the rubber meets the road, we’re both on board with what this duo is, and what it has become.”

Schultz concurs. “Obviously our personalities influence our music, but I don't think about it when we are playing music. Those differences are more pronounced in the day-to-day, outside of playing, but we work well together. Our differences make us a good team.”

Together, Burland and Schultz create a glowing nocturnal ambiance during every performance. The slowly evolving waves of sound they create give rise to a rich and ghostly atmosphere that can sway from blissfully mesmerizing to a white-knuckle ride. Undulating soundscapes rise and fall, reaching slowly swelling crescendos of sensory overload, drifting in a balance of beauty and tension.

Their shared instincts create an invisible structure that transcends more traditional drone music to achieve its own rhythm and tonal logic. “I don’t think of the lap steel or a theremin as drone instruments, and we certainly didn’t set out to make drone music,” Burland says. “It was kind of a pleasant surprise for us when we started exploring these aspects of their sounds. I like to think of it as the music of the moment. No two shows are ever the same.”

Schultz can lay down a sound that may or may not pair well with Burland’s initial musical response. But as their performance unfolds, the instruments find their own natural harmony, often combining in ways that allow for seemingly endless exploration. 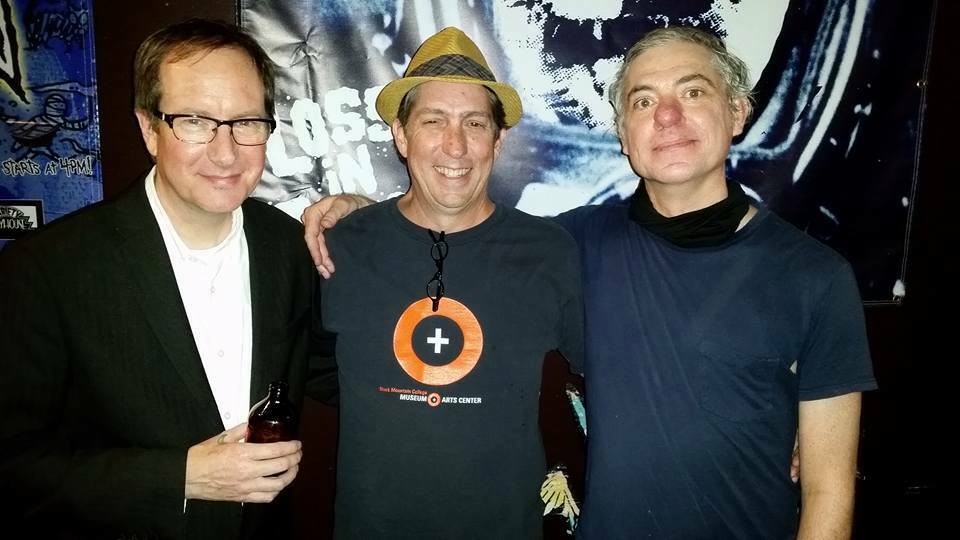 Avant-garde filmmaker Robbie Land often joins DfTaLS to project original 16mm film collages over the band, heightening the effect of performances by adding a visual third dimension to the music. “Robbie adds an amazing visual element to our performances,” Schultz says. “He gets the music, and typically cuts new reels for each of our performances; he gets our work, even though it is never the same twice. We are not much to look at,” Schultz adds. “We don’t move around much, so it helps the audience relax and let the music envelop them, while having their eyes massaged by Robbie's work.”

For Burland, the appeal of the group’s dynamics strays from crafting a distinctly new kind of music. Rather, he’s interested in what he describes as the “luxury” of experimenting with the dissonant and complementary sounds of a Theremin and an electric lap steel working together.

Duet’s latest album, 10, is a full-bodied studio album that reaches ever new heights. The duo’s previous releases were simply documents of live performances culled together with minimal editing. For 10, Burland spent the weekend at Schultz’s house where they spent two days recording. On the third day, they assembled the release. True to form, some of the material remains untouched. Other songs were converted to MIDI and sent through different synthesizers. All of the song titles, such as “Dulcamara,” “Absinthium,” and “Abstractum Belladonnae” were taken from Charles Lochman’s Dose and Price Labels of all drugs and preparations of the United States Pharmacopoeia , a pharmacists catalog published in 1880. “I had been thinking about using the book as ideas for titles, then at one point decided to flip to page 10 as we decided to call the CD 10,” Burland says. “I was amused to find several entries on Aether — an obvious connection to the theremin — and so it was decided we would use the book further.”

A vinyl pressing of 10 is out in March.

“What we’re doing, particularly because we’re improvising, is experimental in the sense that we are still finding things that we’re able to combine in interesting ways — ways that we’ve never tried before,” Burland says.

It's no longer an experiment. At their best, Duet for Theremin and Lap Steel is two musicians sharing a single headspace and letting the music carry them to a wholly undiscovered realm.