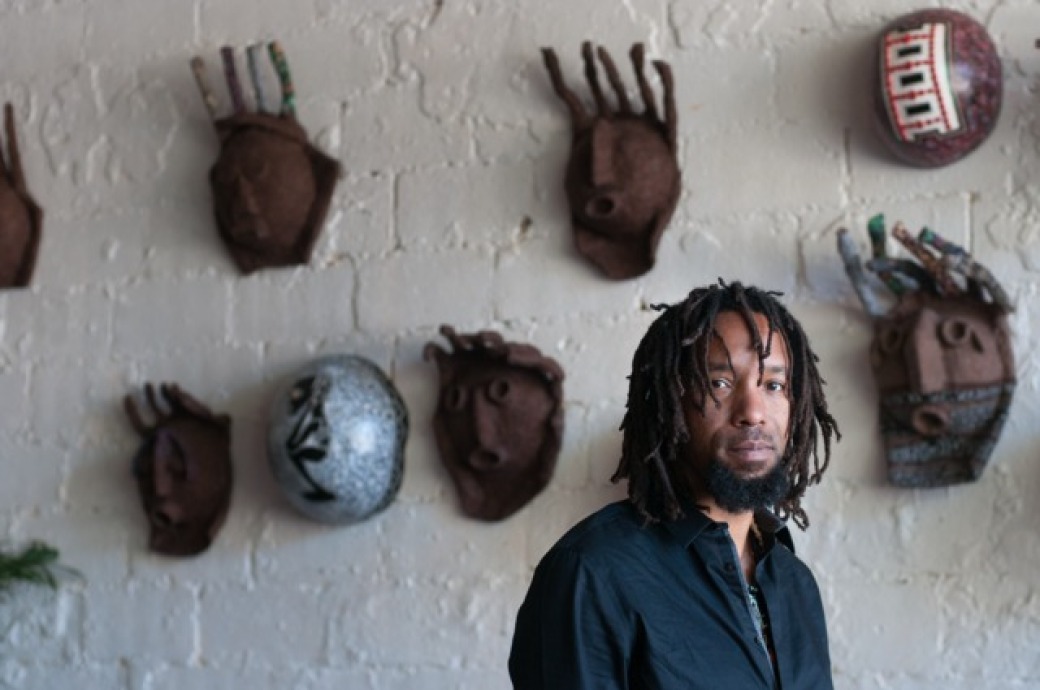 On a brisk Monday afternoon in the West End’s Howell Park, Kebbi Williams looks through the sporadic traffic zipping along Ralph David Abernathy Boulevard. Across the street stands an unassuming beige storefront. Inside, women at a yoga class are working on their final stretches for the day. Outside, there are no signs of life on the sidewalk, save for an Easter egg-colored bicycle rack, and a cartoonish blue, red and purple logo on the front window that reads: Gallery 992. When the din of traffic fades for a few fleeting moments, a wailing Muslim prayer can be heard hanging in the breeze. Then a distant church bell rings.

“Spiritual culture is a big part of the West End,” Williams says.

He points to the next block where the Shrine of the Black Madonna sits quietly behind pulled metal shutters. Across the street stands a Catholic church. One more block east, the Soul Vegetarian restaurant is run by a Hebrew Israelite Community of Jerusalem. “Even when you’re just walking down the street, you got the Rastafarians, the Christians, there’s a big Muslim community, and then you got the 5-percenters,” he says. “They’re all a part of what makes up this whole community.”

Williams is the tenor saxophone player and bandleader of the rogue jazz ensemble the Wolfpack. At 43 years old, he also spends much of his time on the road playing high-profile gigs with the Grammy-winning Americana outfit Tedeschi Trucks Band. Recently, however, Gallery 992 became the focus of his attention. He rents the single-story shop-turned-gallery and performance space. Working with two other main partners, Ragenia Bell and Keith Davis, along with volunteer partners Raphael Tesfa, Marquinn Mason and Alan Grimes, Gallery 992 is tailored to be more than an art gallery and music venue. It’s a community center they’ve created to form tight bonds within the neighborhood; their answer to the West End’s spiritual calling.

“We thought a lot about the many different ways in which we could present this space to the community,” Bell says. “Ultimately, we landed on calling it a gallery because it can speak to all art forms. We wanted to include everything from music to theater; wellness arts; health, movement and dance; literature and publishing; workshops. It’s not just a nighttime club.”

As well as helping maintain daily operations, Bell teaches yoga classes and women’s workshops at Gallery 992. “For a lot of us it’s about exposure and providing what we see is needed,” Bell says. “We recognize the gentrification that’s going on in the neighborhood, too, and want to meet everyone’s needs — the Africans, the college kids, the people who’ve been here for generations and the people who just moved to the West End last month. We want a place where all of these people can get to know each other.”
Since Gallery 992’s grand opening on July 4, 2016, the space has hosted openings for painters, sculptors and photographers, as well as meditation sessions, live music and spoken word performances, film screenings, book readings, master classes and more.

Inside, the dark wood and concrete space is remarkably clean — a happy byproduct of transcending the typical environment of most DIY music venues. Orderliness brings a level of comfort to the gallery, but cleaning it up took a lot of work.
When Williams relives stories of demolition, construction and coincidence surrounding Gallery 992’s origins, one gets the impression that the forces of the universe conspired through him. Before it was Gallery 992, it housed a tattoo shop. Before that, it was the home of the Phoenix Gallery. The spirit of creativity, it seems, haunts the building.

The room is currently adorned with rotating works of African masks and psychedelic paintings, most of which were created by neighborhood residents. In the bathroom, posters of jazz greats — photos by famed New York City jazz photographer Herman Leonard — hang on the walls, each one a relic of the room’s past. “When we got in here and started tearing out the ceiling, jazz fell from the sky!” he says. “It was like: boom — Mingus, Monk, Dizzy. Someone had stashed these posters up there years ago. It felt like a sign.”

In the fall of 2011, Williams rallied dozens of musicians in Howell Park when he staged the first installment of his ongoing free outdoor concert series and nonprofit organization, Music in the Park. The goal was to place young students and professional musicians on a level playing field, and engage them with music. “Good music,” he stresses.

He launched Music in the Park after watching music education programs being stripped from public schools throughout the city. Since its beginnings, MITP has worked with more than 5,100 students and more than 300 professional musicians to crowds of more than 15,000 people.

On April 23, Music in the Park celebrates its seventh year. Working in conjunction with Atlanta Streets Alive, seven stages will be placed around Howell Park. Performers such as the Butcher Brown Band with drummer Corey Fonville, the Tierra Adentro Flamenco Dance Ensemble, the Wolfpack and more are scheduled to play throughout the day. A high school drum line competition is also part of this year’s program. Atlanta trumpet player and neo-bop fixture Russell Gunn will lead a large jazz ensemble, and Los Angeles-based composer and multi-instrumentalist Miguel Atwood-Ferguson, who’s worked with everyone from Lana Del Rey to Flying Lotus, will conduct the day’s finale orchestra. It’s all culminating into the biggest MITP gathering yet.

“Music in the Park started as Kebbi’s vision to display the diversity of the music scene in Atlanta that was underrepresented at the larger festivals in Atlanta,” Gunn says. “It has grown dramatically in the years since its inception into a festival that rivals the larger more well-funded festivals simply on the determination of Kebbi. He is a true leader in the community.”

Over the years, Williams also witnessed MITP’s potential as a means to strengthen the neighborhood’s identity by inviting anyone within earshot of the music — people living in nearby apartments and houses to homeless people on the street — to come together for a shared musical experience. It was during 2015’s Music in the Park that the building at 992 Ralph David Abernathy caught his eye. “I saw that ‘for rent’ sign hanging in the window, and it was like it was meant to be,” he says. “I looked at it and I thought, ‘Man, that would be perfect.’”

On July 4, 2016, Gallery 992 opened its doors for the first time with a show featuring artwork by Marcia Jones and a performance by the Wolfpack. Since then, the schedule has continually filled up, sometimes boasting day and evening events seven days a week.

During a recent Thursday night performance by improv jazz ensemble Konda, only a handful of people filled the room. Attendance was low. One group of stragglers even left when they couldn’t produce a single dollar between the bunch. But the few who did stay were there to soak in a rich musical experience.
As Williams explains, finding a dedicated audience, people who are willing to actively seek out and listen to music, is becoming increasingly difficult. Rather than sit idly by, he uses the Wolfpack to hunt down an audience — take the music to them. “Something we used to say a lot is the Wolves kill,” Williams says. “We gotta eat, and they ain’t coming to us so we gotta go out and get ’em. They’re all out sheeping and herding around, blindly following the leader. So we just gotta ambush ’em. Just hit ’em with the music.”

The Wolfpack, which includes as many as 20 members at a time, has stormed the Five Points MARTA station with a surprise performance in the atrium during weekday commuting hours. Once, the group even piled into the back of a truck and played music while driving down the interstate for everyone trapped in gridlock to see.
The motivations behind both the Wolfpack’s M.O. and Gallery 992 are the same: to fill a void in the city’s creative artistic landscape. Since he started Music in the Park, Williams has watched countless local music venues close, while young audiences’ tastes shifted away from live music. “Kids were getting electronic’d out. Don’t get me wrong, I love trap music, too — but it felt like a younger generation didn’t care to know the live music experience,” he says. “But we have to expose people to these kinds of higher art experiences. Deeper and smarter art that’s more engaging for your mind and your soul. There’s a war going on. We’re going extinct. The Wolfpack is like soldiers, fighting on the frontlines. When we go extinct there ain’t going to be no more music. No more art. So we gotta go out here and fight for this. Kill for this.”
The enemy in this culture war, Williams identifies without missing a beat: “Commercialism. Capitalism. Money.”

It’s an age-old adage that money is the root of all evil. But Gallery 992 strives to work around finances to maintain programming that’s focused strictly on art for art’s sake. Everyone from the co-owners to the bartenders and sound engineers volunteer their time at Gallery 992 for the sake of the space. “We pay the rent here, but there isn’t a whole lot of room left over,” Williams says. “At least not yet.”

It’s a sentiment that Gunn echos: “Kebbi grew up in the West End, and ever since I’ve known him he has been determined to have a place that emphasizes higher black arts because, quite frankly, in Atlanta there are dozens of places that emphasize art that appeals to our basic instincts,” he says. “Gallery 992 is a much needed place in a neighborhood where the negative is the most publicized aspect.”

Along the way, victorious nights keep the club running and make up for the small attendance on other nights.

Performances such as this place Gallery 992 within the context of the neighborhood’s past as well as its future. Two blocks to the east down Ralph David Abernathy, a new coffee shop with a performance stage called 640 West has recently opened its doors. To the west, Live Edge is a new restaurant and bar bringing blues, jazz and R&B music to the West End’s nightlife. But Williams remains focused on the strengths and potential of building a community gathering space.

“My priority is the neighborhood,” he says. “There is so much culture here, and it’s walkable. You can walk to a grocery store, a coffee shop, a vegetarian restaurant. And now you can walk and see a show or take a dance class or a yoga class here. I want the neighborhood in here. The West End is a diamond in the rough. The last best kept secret in Atlanta — maybe in America.”