The whole world in your hands

Despite our country’s abundant fast-food options, a snack that’s perfectly encased into one compact and handheld package isn’t something we Americans have quite nailed. Fortunately, nearly every other culture around the world has. Usually fried, often carby, and always delicious, these snacks can get you through that late afternoon stretch when you need a bite … but not too big of one. Bonus points if you can hold that snack in one hand while battling Atlanta traffic with the other.
Illustrations by Rob Royall. 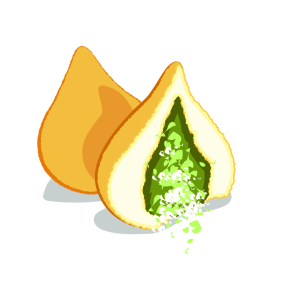 Located just off the beaten path in Marietta, Brazilian Bakery Café’s pastry case overflows with sweet and savory pastries. But the one that reigns supreme for on-the-go snacking is the coxhina. Translated from Portuguese as little drumstick, the fritter is distinguished by its teardrop shape. Here, it’s filled with a chicken and mozzarella mixture, then battered and fried to a crisp. 1260 Powers Ferry Road S.E. # A, Marietta. 770-818-0088. brazilianbakerycafe.com 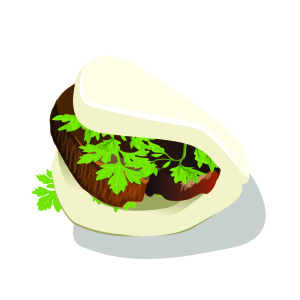 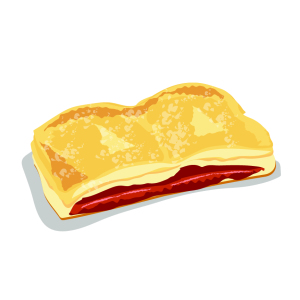 Perhaps best known for its colorful food truck and Cuban sandwiches, this mobile bakery serves up a mean pastelito, a rectangular puff pastry traditionally filled with fruit and cheese, for your afternoon sweet tooth. A buttery, flaky pastry exterior conceals a warm mixture of guava and cream cheese on the inside. Pair it with a cortadito (Cuban coffee with milk) for an extra boost. 678-744–5638. Locations at buenagenteatl.com 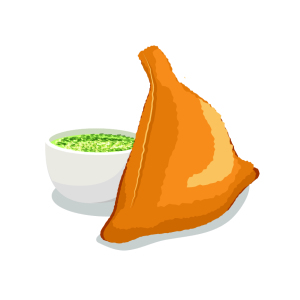 Although the Chipotle-style, fast-casual Indian restaurant — which has two locations in Atlanta — includes the word “naan” in its clever name, the samosas are where it’s at. Made from a recipe handed down by the founders’ grandmother, the traditional savory pastry is stuffed with garam masala seasoned potatoes before being fried to a golden brown excellence. 3420 Piedmont Ave. N.E., 404-846-6226; 64 Broad St. N.W., 404-522-6226. naanstop.com 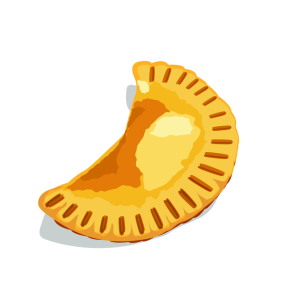 If it wasn’t for gems like this place, Druid Hills would be almost unrecognizable from an OTP ’burb. Owned by Dominican immigrant Victor Ramirez, the Latin coffee shop and bakery resides in a former Arby’s space with retro vibes. They cook up everything in-house, including their crispy empanadas, plump with traditional fillings like meat and chicken. If you need some caffeine, Ramirez makes a mean Americano con leche that’ll power you right through rush hour. 1788 Clairmont Road, Decatur. 404-968-9981. goldendropscafe.com 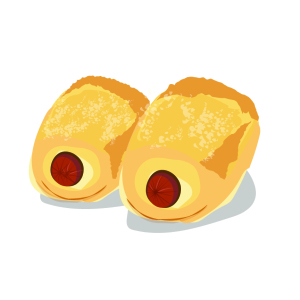 A treat that hails from Central Europe, the kolache gained popularity in Texas where Czech immigrants settled. When Sokcheat Heng emigrated from Cambodia and opened a doughnut shop in Marietta, his friends from Texas encouraged him to include kolaches. They knew how popular the snack is in Texas and were sure they’d be a hit here, too — and they were right. The kind of treat that hits both sweet and savory notes, the Texas-style kolache is similar to a pig in a blanket, with a smoky sausage encased in sweet Danish dough. 1282 Johnson Ferry Road Suite 109, Marietta. 470-308-6130. 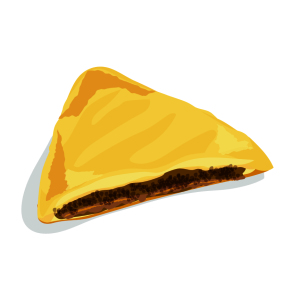 Tucked into the back of the funky little Four Corners Market in Little Five Points, you’ll find this no-frills Jamaican restaurant. British colonialism introduced savory turnovers to Jamaicans, which were then adapted by the locals to taste, well, much better. The patties at Nyamminz are homemade with golden dough and the traditional spicy beef filling laced with curry and cayenne spices. 1083 Euclid Ave. N.E. 404-730-3444. nyamminzandjamminzja.com