HIGH FREQUENCIES: Back to the Future

The Ancients, the Roosters, and Peter Hook revisit the past 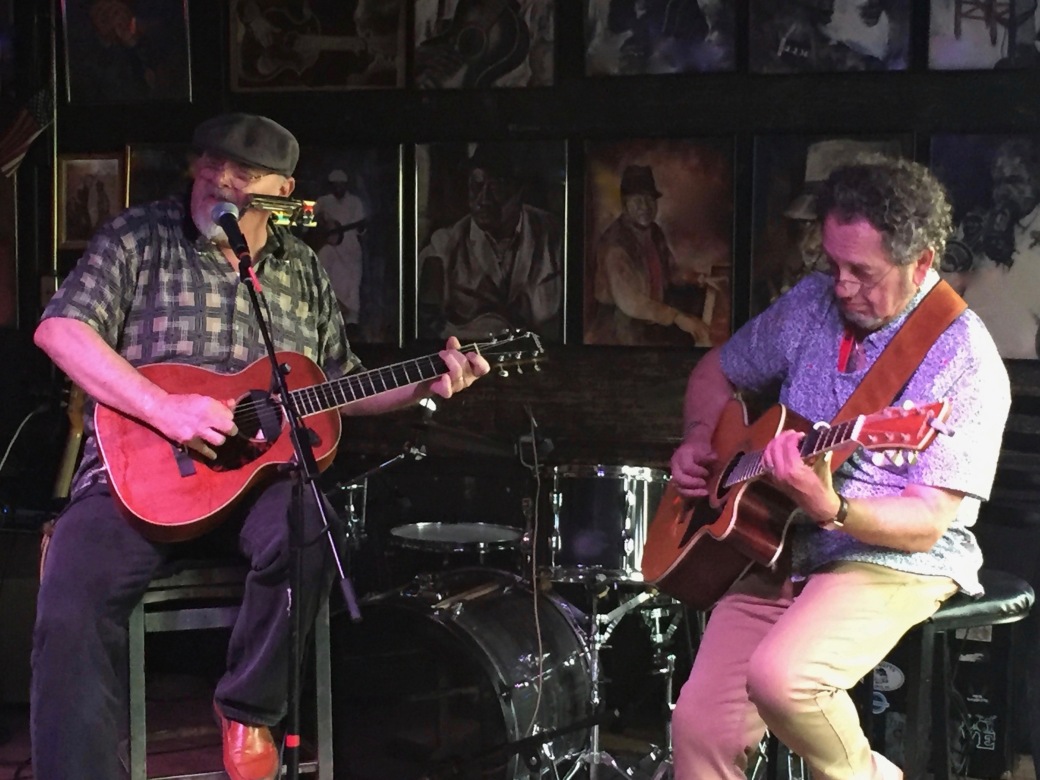 This past weekend, the Northside Tavern hosted “Magic Fredfest,” the annual two-night birthday celebration of its door buddha Fred Pittman. This year, Friday night included a performance by Grant Green, Jr. with the Cody Matlock Band. Saturday kicked off early in the afternoon with a set from Shelton Powe, followed with an acoustic set by Bill Sheffield, ably-assisted by longtime friend Spencer Kirkpatrick adding tasteful guitar accents. Others onstage after the sun set included Rod Hamdallah, the Magic Fred Blues Band, the Vipers, the Cazanovas with Eddie Tigner and Albert White, and Stoney Brooks and Juju Root. As in years past, the evenings were recorded to preserve the impromptu jams that always take place, because you never know who will drop in to wish Pittman a “Happy Birthday.” Purchase of a ticket included a buffet courtesy of another Atlanta blues joint across town, Fat Matt’s Rib Shack. Isn’t it great when music clubs work together?

Atlanta guitarist Kirkpatrick, probably best known as one-quarter of Hydra, the legendary ’70s band that recorded for Macon’s Capricorn Records, has been playing with another Hydra alumni, drummer Steve Pace, in the Ancientz. The band, with Gary Doty on bass and Benny Benton on keyboards, had taken up a Wednesday night residency at Buckeye’s Getaway, but have now switched to alternating Thursday nights at the neighborhood bar and grill. Located just ITP where I-85 crosses I-285, off Chamblee Tucker Road, Buckeye’s Getaway is a small room with a good vibe and better food. Cathy Price, who books the bands, calls the nights the Ancientz play a “rock extravaganza,” but when guitarists like Jody Worrell join the band onstage, Kirkpatrick is known to use the term “guitarmageddon.” Otherwise, Kirkpatrick maintains, “We aren’t reinventing the wheel, just playing some old tunes from yesteryear as we have always played them!”

This Saturday night, Kirkpatrick and Pace will do just that with the Roosters. Fronted by long-time Athens/Atlanta vocalist Guy Goodman and Atlanta radio personality Deborah Reece, with Tony Vaughn on bass, the Roosters have performed together off and on for well over a decade. Like the Ancientz, much of their material is from the ’60s, but with Goodman’s vocals, the songs really begin to howl. The onstage chemistry between Goodman and Reece works well, too. It should, not only did the pair co-host 97.1 — the River’s “The Deep Music Vault,” but they’ve been together offstage for years.

This Sunday, May 27, Peter Hook & the Light return to Atlanta for a show at the Variety Playhouse. It’s been 35 years since Hook first played Atlanta at the 688 Club with his band New Order. That was an intense night, fans of Hook’s first band, Joy Division crammed into the small club on Spring Street with latter-day New Order fans wanting to hear “Blue Monday” and other electronic dance hits from the groups Power, Corruption & Lies album. Both groups had to wait. The band wouldn’t go onstage until their friend and New York impresario Ruth Polsky arrived from New York. When the taxicab finally dropped her off at the club, and she announced herself in the dressing room, the band made their way through the wall-to-wall crowd and took the stage. They opened with “Confusion,” followed by “Ceremony,” “Chosen Time,” “The Village,” “In A Lonely Place,” “Your Silent Face,” “Cries and Whispers,” “586,” and “Everything's Gone Green,” ending, of course, with “Blue Monday.”

Of course, Hook is no longer in that band, which he, Bernard Sumner and Stephen Morris formed following Ian Curtis’s suicide and the break-up of Joy Division, as Loring Kemp discussed with him two weeks ago in CL. Frankly, I found Hook’s venturing out on his own a win-win for fans. Those who want to delve into the past of both Joy Division and New Order can do so with Peter Hook & the Light, while those wanting to dance to the synth pop (Remember when that was a thing?) of New Order can still do so when that band tours.

Tuesday night, May 22, as part of Clay Harper’s “Every Tuesday in May” events at the Avondale Town Cinema, former 688 owner Steve May will be in conversation with this High Frequencies columnist to answer twenty questions on the club and its influence on punk and new wave music in Atlanta. Opening the evening will be Duet for Theremin & Lap Steel. Clay Harper, with Marshall Ruffin, Chris Case and Jordan Dayan, will close the evening, performing songs from his soon-to-be-released Bleak Beauty album and other material from his varied and illustrious career. For those of you who have yet to experience one of these intimate evenings, they are presented upstairs in Tony's Lounge. That is, it’s a small space and seating is limited, so get there early.

If it’s Memorial Day weekend, it must be time for Bubbapalooza, the annual festival at the Star Bar celebrating Atlanta’s Redneck Underground in memory of Gregory Dean Smalley. This year, Bubbapalooza holds court over four nights, Thursday, May 24, through Sunday, May 27, meaning regulars will most certainly have a hangover Memorial Day. Ghost Riders Car Club headline Friday night, with Anna Kramer & the Lost Cause closing out Saturday night.

Contact Tony Paris regarding band news and music-related events at cl.highfreqs@gmail.com. Information sent via Facebook or Messenger is consciously ignored.