How the grass-roots gallery and venue cultivates community 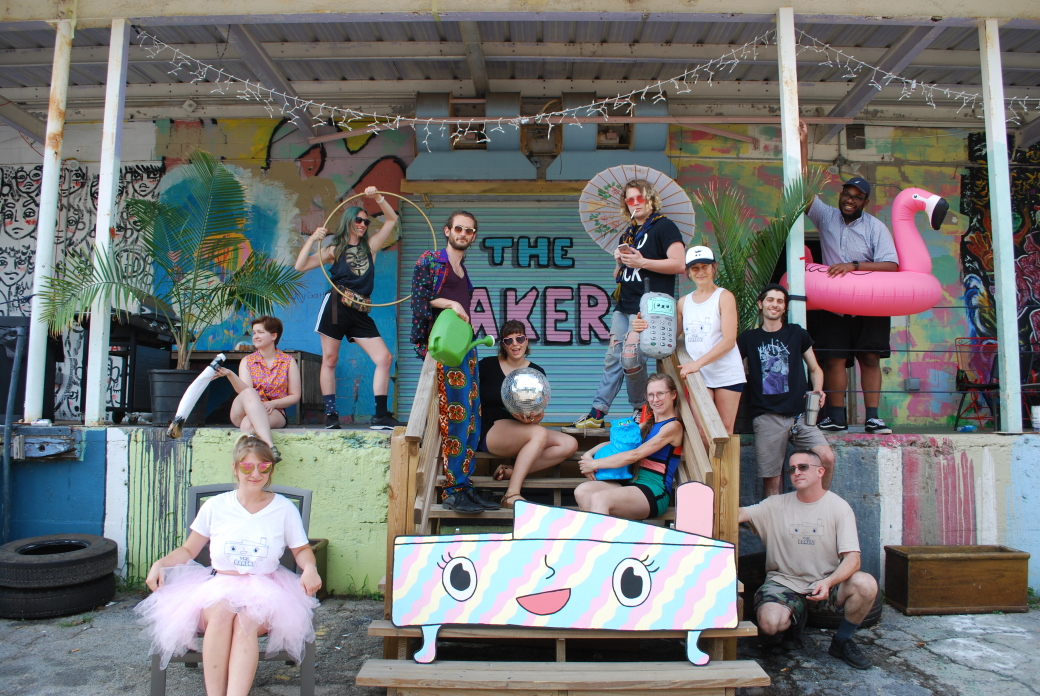 Alien puppets, spaceship props, and a bioluminescent rainforest transformed the vibrantly painted warehouse into a distant planet, where extraterrestrial performers executed the fluid musical stagecraft of Joshua Loner’s intergalactic space-opera Celesthesia 1.5: Light Speed! The decorative installations were crafted with love by local artists and volunteers, each part recycled from materials left behind at a wedding the week before.

The hybrid musical-theatre performance illustrates the self-reliant and fiercely creative energy cultivated by the Bakery, a progressive, multi-use arts and music venue on Atlanta’s Southwest side.

On the cusp of Oakland City and the rapidly gentrifying Adair Park, the Bakery sits between the Westside BeltLine Trail and the Aluma Farm. Slathered in hand-painted pastel murals and artful graffiti, the warehouse was once a functioning bakery in the ‘50s, ‘60s, and ‘70s, before housing secretive rave party hotspots CoLab and Kaleidoscape circa 2006-2016. Since founder and creative director Willow Goldstein and her mother, Olive Hagemeier, took over the space in October of 2017, she and a team of volunteers have shifted away from the building’s former rave affiliations and have developed the Bakery as a community center for DIY arts, music, and education.

Over the last year, like-minded independent gallery and venue spaces such as Mammal Gallery and Eyedrum have been forced out of their buildings, casualties of a wave of gentrification sweeping over South Downtown.

The Bakery is fighting to preserve legitimacy for community-based arts. “I have said it’s inherently DIY because my mom has taught me to just do everything ourselves my whole life,” Goldstein says. “I have been trying to recall when DIY, as an ethos, first entered my vocabulary, and it definitely is more recently. I'm certainly trying to run a business — not turn a profit necessarily — that balances DIY with more traditional operations because I want people to be paid and valued and sustained. I'm absolutely not working toward 501(3)(c) status because while we operate largely as a team with regular team/staff meetings, I still retain decision-making power,” she adds. “This is based on my past experience and frustrations with nonprofits.”
As an Eyedrum Art & Music Gallery board member, Goldstein's administrative and curatorial experiences have allowed her to continue building professional and friendly relationships with many of the artists and volunteers who now contribute to the Bakery. When she and her mother began focusing their energies on building up the Bakery and assembling a team of volunteers through social media and Craigslist ads, they were met by a flood of artists eager for a place to showcase their work.

Their efforts highlighted a dilemma: While there is an abundance of compelling art being created by Atlanta-based artists, there’s a lack of spaces in which it can be presented. “The caliber of artwork brought to a warehouse in this random location was surprising,” Goldstein says.

Goldstein handles art curation and community building. In the meantime, musical programming is overseen by fellow Eyedrum board member Daniel DeSimone, who also plays bass for local grindcore band Malevich. While DeSimone’s promotion company, Face of Knives Productions, focuses on heavy metal, post-rock, and abstract noise acts, he also books artists of all genres, ensuring that guests of the Bakery experience something new every time they return. “I’d rather throw a thousand genuine artists against our walls just to see what sticks rather than try to craft the most appealing lineup to the masses or some capitalist entity,” he says. “That way, even if a show is weird, at least I’ll know it’s going to be sick. It’s about curating valuable art from a revolving door of different people and building a genuine and positive environment around that.”

For Goldstein, keeping that door revolving means expanding programming to accommodate community gatherings and educational opportunities. This includes technology workshops with Streetcat.media’s Maggie Kane and art classes such as photography and life drawing.

The Bakery houses a handful of performance spaces, affording time and square-footage to host yoga classes, afternoon art and technology workshops, evening film screenings, and a full bill of musical performances to finish off the night. The venue even offers a small daytime coffee shop with snacks and drinks, where the staff of PLASMA Magazine operates editorial meetings in exchange for people power and promotion for the Bakery’s events. A large team of multi-talented artists and media producers came to the Bakery in search of residency and workshop space, and many have found themselves organically folded into the team as their talents were needed for programming, curation, and the extra elbow grease required to maintain a DIY space.

Goldstein and DeSimone want everyone who comes to the Bakery to feel comfortable being who they are, as long as they are respectful. The building features a gender-neutral bathroom facility, and programming regularly promotes gender equality. The venue hosted the Southern Fried Queer Pride festival in June of this year. “If I am a gender nonconforming person, am I going to have to fight the battle that I have to fight every day of my life just to go see a show?” DeSimone says. “There should be a space where no one feels that they are going to be heckled by drunk people just for being different.”

Programming is overseen by Goldstein, whose methodical but affectionate pragmatism can be felt within every crevice of the Bakery. Goldstein is supported by a sizeable team of artists, musicians, teachers, curators, and contributors who make the venue’s round-the-clock activity possible. Goldstein says that her mother, who studied at the Atlanta College of Art and is playfully referred to as “the Muscle” of the operation,  continues to help supervise its daily operations. Most of the venue staff work as volunteers, for work exchange or barter, or simply because they enjoy what the Bakery has to offer.
“DIY doesn’t have to mean shitty, and it isn’t always just about doing everything yourself,” DeSimone says. “That comes with a lot of its own hang-ups, and the burnout fuel of thinking that you have a burden to shoulder by yourself. It’s about taking what you are and making it successful rather than trying to conform to someone else’s idea of success. I know this is badass, and I’m going to do everything I can to foster it until I either get crushed under the machine or win.”

Highlights for the Bakery's upcoming programming include Diane Cluck, Loudermilk and Moon, and Casey Hood on Sept. 3, Lupita’s Revenge: Shadow Puppet play with live music on Sept. 9, and the Turn Up/Turn Out Rock the Vote show featuring Little Tybee, Linqua Franqa, Loner, and more on Nov. 3.

Looking to the future, the Bakery will continue to expand the capacity of its performance spaces, while Goldstein, DeSimone, and the rest of the team work to incorporate new projects and experiments into the venue. “It’s a platform for events, a platform for the people, even a platform for me to learn how to run a business,” Goldstein says. “Everything that’s happened at the Bakery so far has been so positive that I’m just trusting in it to be whatever it is."

The Bakery is located at 825 Warner Street S.W. www.thebakeryatlanta.com.