HIGH FREQUENCIES: Taking it to the streets

Ray Dafrico on music — and ‘the resistance’ 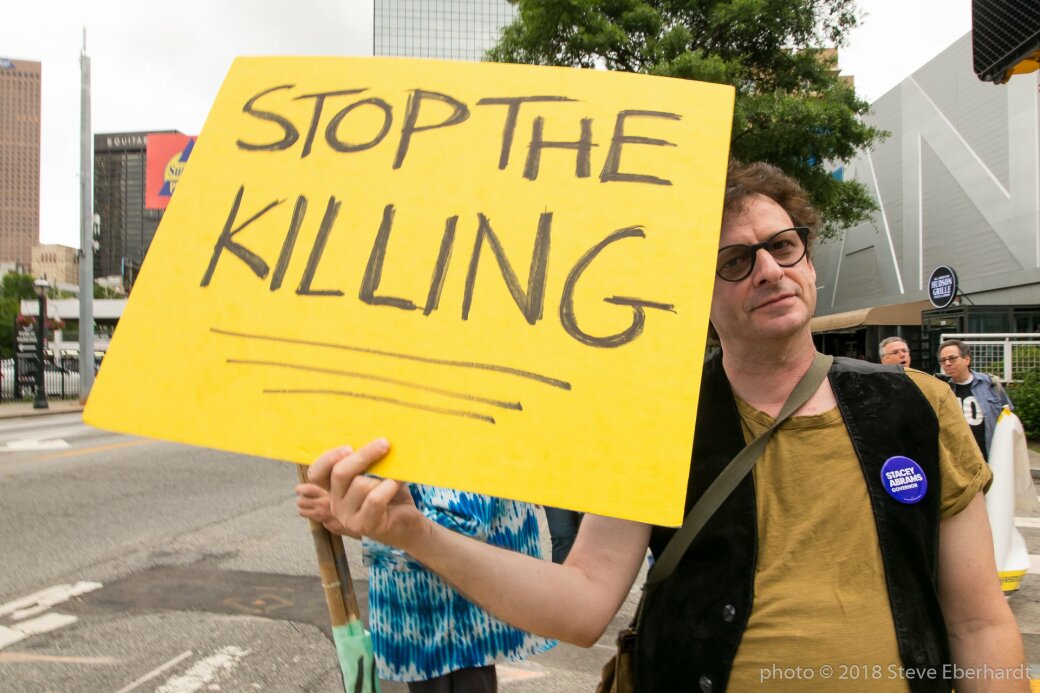 Those who frequented Atlanta’s famed 688 Club in the early ‘80s certainly remember the Nightporters. The band, fronted by Ray Dafrico and Andy Browne, with Tim Nelson and Paul Lenz in the original line-up, might as well have been the club’s house band in the last half of its six-year run. The Nightporters always seemed to be playing the club that took its name from its street address on Spring Street.

Forming after the initial explosion of Atlanta “punk” bands, the Nightporters were young, loud and snotty, and had the songs and the stance of the time.

Dafrico is still making music, recording when and where he wants, and performing gigs whenever he gets the right group of musicians together. Most recently, he’s released a new CD, Tunnel Visions, but making music is not all that occupies his time.

More recently, Dafrico has become very much the political activist, taking stands on a number of issues, and organizing and marching in demonstrations, on election day even offering rides to the polls for those who needed them.

What changed — what prompted you to get off stage and in the streets?

The day Trump got elected I got into the Resistance. I had spent a lot of time near Atlantic City when I was younger. I knew then, when he built his hotel and casino there, that he was a con man.

I’ve always despised the guy and people like him. As punk rockers in the ‘80s, we hated Yuppies and vain, superficial people. Ronald Regan was another one … I got small group of concerned citizens together and we began meeting with local politicians — David Perdue’s office, Jonny Isakson’s office, John Lewis, Hank Johnson and Stacey Abrams before she was running for Governor — about our concerns with Trump. The Republican’s were useless. They actually believe the ‘fake news’ rubbish that Trumps spews out, and think that we’re all ‘paid protesters!’ The Democrats were very encouraging and helpful. In fact, when Congressman Hank Johnson found out I lived in the 6th district, he said ‘We need your help, there’s this guy named Jon Ossoff that’s going to be running for the Congressional seat in the 6th.’ That’s how I found out about Jon and started volunteering for him, which really changed my life and that of many other people as well.

A lot has happened in a sort period of time. I’ve been on almost every (anti-Trump) march in Atlanta, and I led the first ‘Impeach’ march with 600 people marching five miles from Midtown to Buckhead. I thought, ‘Why is everyone doing marches in town? Everyone is onboard there, it’s preaching to the choir.’ I felt we needed to go where we weren’t wanted — Buckhead!

John Lewis has been a major influence on me. I always ask, “What would John Lewis do?’ And the answer is, ‘Make good trouble!’ I’ve also been attacked by Brian Kemp, who threatened me on Facebook because I told the truth about him on the news and how the servers were wiped in the 6th district election the day after a lawsuit was filed against them, leaving no trace of the hacking and vote-flipping that went on. Now he’s running for Governor AND running the election. Can somebody say conflict of interest?

I’m also man enough to not have to carry or glorify guns, despite having one pulled on me for putting up an Ossoff sign and people trying to punch me for canvassing, which is legal, it’s not soliciting. I think it was Peter Townshend who said, “The guitar is mightier than the sword,” and Keith Richards said it was rock ’n' roll that brought down the Berlin Wall.

Why have people mobilized?

I think people were shocked that someone like Trump could actually be elected and they started realizing that politicians, at least the ones in the majority, aren’t doing anything but awful things and are not listening to regular people, the not rich, nor addressing the  needs of the common people.

It also has become very clear that we are going to have to make them listen by taking the power away from them and by putting people who care into office.

Not that this is all new, but it has reached an all time high — or should I say low? For me healthcare is the main issue, that is a basic human right for everyone and corporations shouldn’t be making money off of it.

There are basic things that people need to live and making these things inaccessible to most people is beyond me. The same with discrimination, climate change denial and refusing refugees. Conservatives who have been in power need to have compassion for fellow humans — and they obviously don’t, despite what they say about having “Christian values.”

Do you feel you’ve been successful?

It’s a slow process. In the fall we will see how much actual change there is. The thing that worries me is the Bernie/Hillary syndrome. I’m a Hillary (Clinton) guy. I wasn’t in the ‘90s, but I didn’t care then. I grew to appreciate her and can’t believe how many people bought into the right’s (and left’s) propaganda against her. As far as Bernie (Sanders), I respect what he says he wants to do. But he never seems to follow up with getting it done. That is frustrating. I do think the he has inspired the younger generation to be involved and that may be the key factor moving forward, but please, people, don’t throw Pelosi and Hillary and the older generation under the bus. They are fighting the same fight and have been doing it long before ’the Resistance’ or ‘Feel the Bern’ slogans started appearing. I’m probably somewhere between Clinton and Sanders now, and I think that’s the sweet spot for Democrats.

Do you feel you’ve made a difference?

Definitely!  The Republicans in Georgia now have a challenger in almost every seat in the state. That is progress! We stopped the horrible ‘barcode’voting machine bill for the moment and the GOP know they are now facing an uphill battle on every level because there are now so many people that are active and networked.

Has social media made activism easier — or harder?

Well it’s a trade off. It’s much easier to reach a lot of people quickly, but it also leaves a lot of room for misunderstandings. I grew up with a phone hooked to a wall so I like to hear a person’s voice.

Besides supporting the Democratic party, what other causes have you been active in?

I’m a Democrat and have always been a bleeding heart liberal, but the funny thing is, I’m not really a ‘causes’ kind of guy. I’m just a guy and I don’t really like politics and drama! I feel like saving the world at this point is, you know, crucial! But I will always be a rock ’n' roller first. I’ve just been sidetracked.

None of this is really reflected in your new music, or am I just missing it? The name itself seems like it could be a statement on many peoples’ views today.

Most of these songs were written a while ago, so they don’t reflect the moment at all. Although yes, the title is about how I have been feeling the last year or so and what the country has been going through, but also that it was recorded between the ‘tunnels’ of New York. One song, “Pill Hill,” is about the lack of affordable or free national heath care in the U.S., so there is some activism in there. The song ‘Give it a Try’ is partly about trying to have positive outlook under difficult circumstances. I have been kicking around the notion of doing a whole album of protest songs, or covers of protest songs. I just don’t want ‘protesting’ to take over my true passion, which is music.