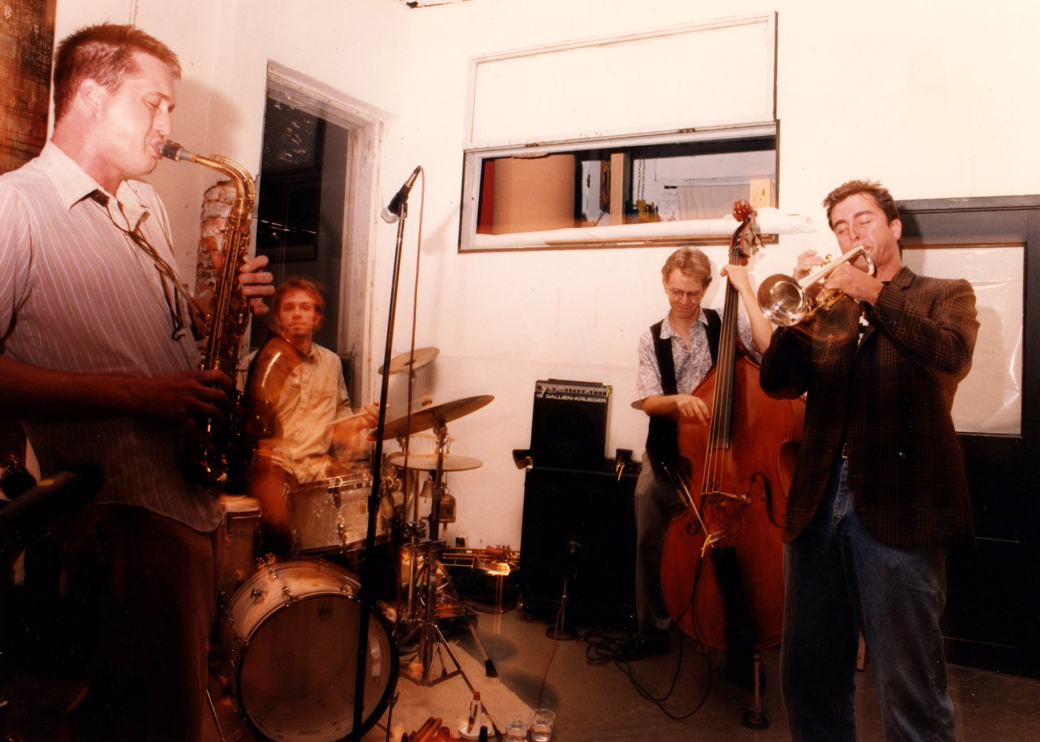 Two decades after starting out as the Silver Ceiling — a living room art gallery and performance space in a Trinity Avenue loft Downtown — the Eyedrum Art & Music Gallery marches on as a haven for Atlanta’s creative outsider arts communities.

The 20-year-old DIY arts institution has been homeless since February, after developers ousted the volunteer-run non-profit from its Forsyth Street location. Still, a celebration is in order.

Eyedrum’s mission has always focused on creating a space where experimental and avant-garde arts can co-exist outside the restrictions of commercial nightlife. Since moving into its original home at 253 Trinity Ave, Eyedrum has fostered a scene of artists, musicians, and audiences willing to embrace music and arts that were as contemptuous as they were conscientious. Acts ranging from Don Caballero, Z’ve, Deerhunter, Songs Ohia, and DJ Cut Chemist to a queer hip-hop showcase featuring Scream Club, Athens Boys Choir, and more have all performed there amid exhibitions with titles such as Switch, Liquid Smoke, and the Penis Show.

“Eyedrum is the city’s most enduring underground and cutting-edge arts collective, and has been an inspiration, and, in some ways, a guiding light for other organizations to follow,” says Roger Ruzow who plays trumpet with Atlanta’s Fourth Ward Afro-Klezmer Orchestra, and the Gold Sparkle Band. The latter group is one of Atlanta's most revered free jazz and improvisational ensembles of the late '90s, and is currently based in New York City.

On Saturday, October 20, the Gold Sparkle Band returns for a rare appearance at the Metropolitan studio lofts in the West End, honoring Eyedrum’s legacy of visual arts, music, film, and more.

“For Atlanta, Eyedrum is a young archetype,” Ruzow says. “It has always been a fantastic thing that has existed and persisted, and has always been forthright in putting new and different artistic experiences out there for the public to take in. It’s run by people — volunteers — who are driven to create this space where the community can experience artists trying out new things, improvisation, art and music that exists outside of the mainstream. It has always been consistent in presenting these things,” he adds. “There are a reasonable amount of groups who are doing similar things now, but over the last 20 years, there were many times when Eyedrum was the only game in town.”

Will Lawless is an Eyedrum co-founder, and an on-again, off-again fixture and board member for most of the gallery and venues history. He is also one of the lead organizer for the 20th anniversary celebration. “When Eyedrum started, one of the goals was to create a place for local artists to show their work, and for national and international musicians to play in the South,” says Lawless. “More than anything else, we believed that Atlanta was both lacking and deserving of a place like Eyedrum.”

Lawless hopes to make Eyedrum’s extensive catalog of live music recordings available online for public consumption. He also is currently seeking the means to facilitate the often-proposed idea of a book or documentary film chronicling the organization’s history. A trove of digital and physical artifacts, such as flyers, photographs, and artwork, as well as audio and video files, is currently being cataloged in the Rose Library Special Collections and Archives at Emory University. Artists and patrons are encouraged to submit donations through the Eyedrum website or, for physical works, by arranging for a drop-off.

Grace Kim currently co-chairs Eyedrum alongside Neil Fried. The ongoing but temporary absence of a physical anchor for Eyedrum only increases their feelings of homesickness. Still, the underground arts institution’s place in Atlanta is difficult to renounce, especially after accomplishing the miracle of maintaining a presence amid the city’s ever-gentrifying landscape. Even without a proper home, Eyedrum persists. Casting her vision forward, Kim says, “I see Eyedrum staying true to its DIY ethos as an artist-run, artist-driven, artist-serving organization committed to fostering and facilitating experimental, collaborative, and avant-garde work, which would not be exhibited or experienced otherwise.”