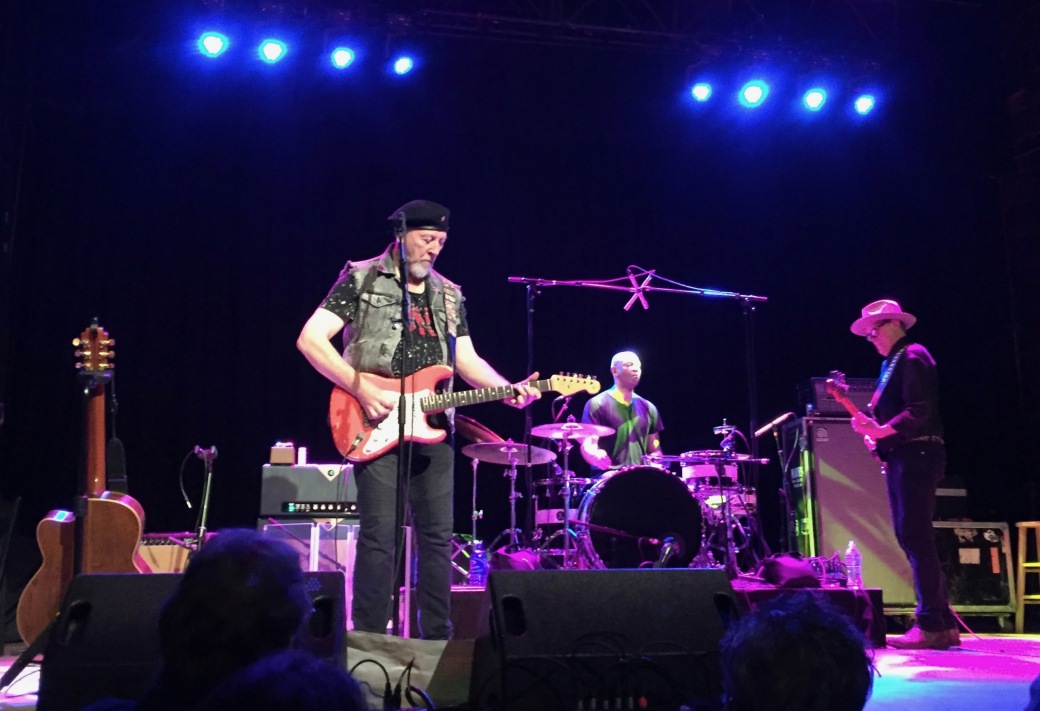 Guitarist Richard Thompson performed with his Electric Trio at the Variety Playhouse Saturday, Dec. 1. Thompson has performed in Atlanta countless times, first as a member of the traditional British folk rock group Fairport Convention, though mostly as leader of bands he’s put together during his long and varied solo career. In all that time, he’s never given a bad performance in this city. How many musicians can you say that about? Exactly. You can count them on one hand. Maybe one finger.

It’s because he’s always so good that I wasn’t planning on seeing his most recent show in Little 5 Points. It was going to be good. It always is. And Dec. 1 was a busy night for music in Atlanta. Magnapop, Come, 86 and a number of other bands were playing at the Earl and 529 in East Atlanta Village for Henry Owing’s fiftieth birthday parties. David Franklin and Chris Edmonds were both scheduled at Smith’s Olde Bar. The original Mudcat and the Atlanta Horns, with Mandi Strachota and Little Joey Hoegger, were celebrating the release of Castaway (Original Cast Recording) with a live performance of the piece at the Avondale Towne Cinema. Certainly, a lot more risks would be taken on any one of those stages.

It was an amazing show. Absolutely.

Something from nothing dept. … It wasn’t that long ago that Lucy Freas, co-founder with Josh Antenucci of Atlanta’s Rival Entertainment, was posting photos of her office — expansive views of the Georgia State Stadium — on her Facebook page as Rival was preparing for the inaugural concert at the former site of Turner Field with Foo Fighters headlining. Now, with Super Bowl LIII being hosted at Atlanta’s Mercedes-Benz Stadium, Freas and company are preparing for another first, building a concert venue at Atlantic Station from the ground up to present the annual DIRECTV Super Saturday Night the evening prior to the the big game. Construction has already started on the three-tiered, 72,000-square foot structure for the event, which brings Foo Fighters with special guests Run The Jewels back to Atlanta for the second time in less than a year. Once the concert is over, the same crews will work to dismantle it, offering those who attend a truly “once-in-a-lifetime experience.”

Baby, it’s cold outside dept. … This Thursday evening Michelle Malone and the Hot Toddies, the singer/songwriter’s cool Yule holiday incarnation, celebrates the release of Toddie Time, an EP of soulful and jazzy takes on traditional Christmas songs, at Eddie's Attic. The trio reinterprets classic Christmas tunes — think Nat King Cole, Rosemary Clooney, Ella Fitzgerald, Dean Martin and Elvis Presley — creating new jazz and blues arrangements that display Malone’s vocal prowess and innate ability to let the music take you to  another time and place. Joining Malone and guitarist Doug Kees this season is bassist Tommy Dean, no stranger to Atlanta music fans, nor to holiday merriment, having released A Swingin’ Christmas with his band, The League of Decency, in 1995. Expect spirits to be bright. … If you get to Decatur early enough, be sure to stop by Different Trains Gallery 2 at Cornerstone Bank, for a Holiday Open House from 5 to 8 p.m. featuring the exhibition of Atlanta artists Eben Dunn & Jim Johnson.

Unaspeckles meowl love dept. … Atlanta artist R. Land held quite an open house of his own at his Waddell Street Studios in the 30307, Sunday, Dec. 2. Featuring the debut of his new, limited edition Christmas ornaments, Hanukkah Claus,  as well as the artist’s more familiar works — who doesn’t know his iconic “Pray for Atlanta” design — more people were lined up to purchase items to take home then they were for the free pizza, beer, and wine Land provided. While verging on visual art sensory overload, the party took on a more musical direction with two performances by Duet for Theremin and Lap Steel, the group for which Land provided the artwork on its album 10.

Last splash dept. … As many already know, it’s time to say goodbye to the Avondale Towne Cinema. After four years of trying to make it work as a live music venue, owner Tony Longval has decided it’s time to close the multi-level performance space and move on. It’s sad to see such a great old theater go dark once again, especially with all of the work Longval put into it. While this Saturday, Dec. 8, The Rainmen play their final gig there, other shows are booked until the final curtain call Dec. 15 with the Third Annual Christmas Holiday Music Jam.