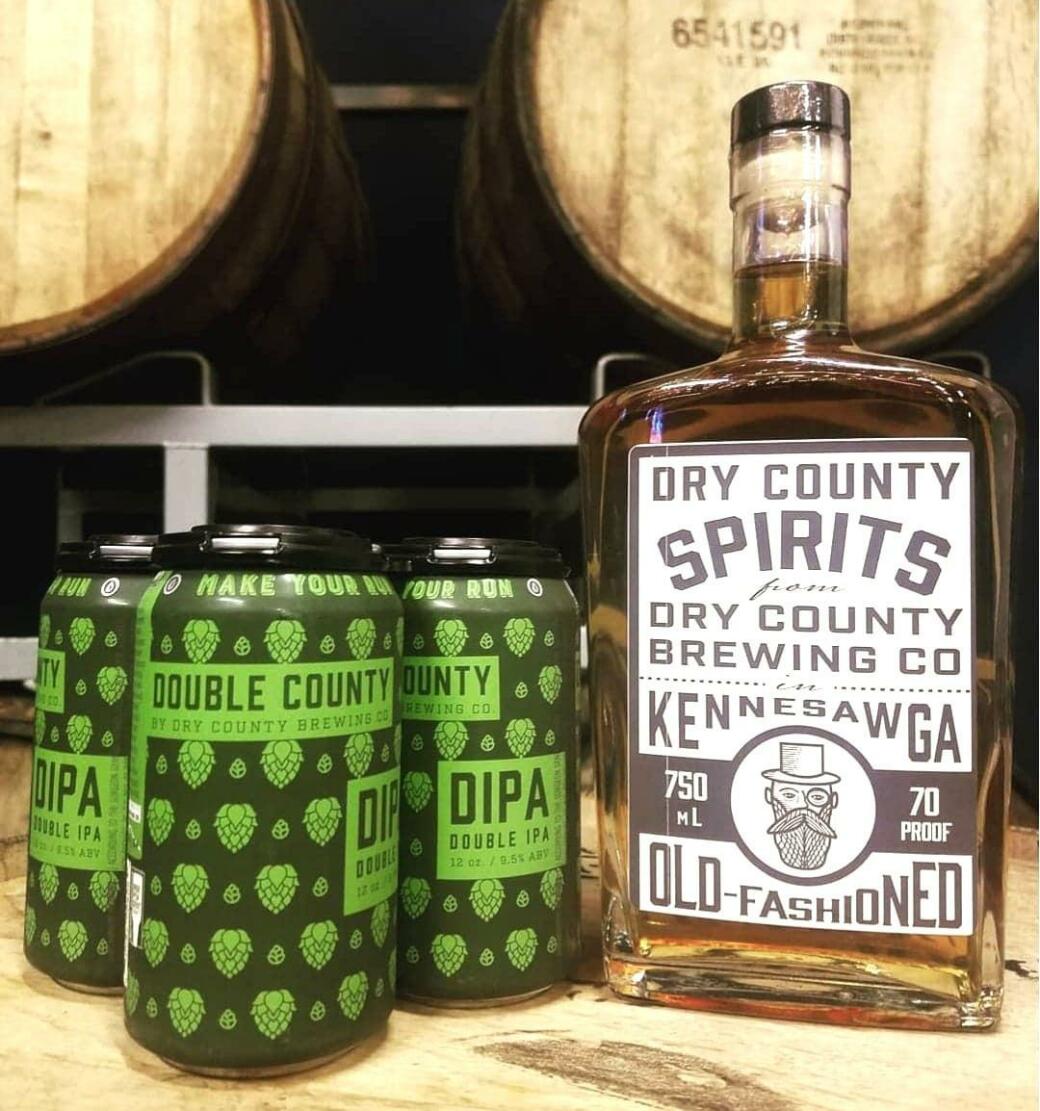 Since its launch in 2015, Kennesaw’s Dry County Brewing Company has proved itself a leading innovator in Cobb County’s burgeoning craft beer community. The brewery built its name on local word of mouth, and introduced more than a few plucky college students to their first taste of approachable and reliable craft beer. But in 2019, Dr County is making a bold run to become Georgia’s first “brewstillery,” with the introduction of its own line of house-made spirits and liquors.

For now, Dry County is acquiring spirits in bulk from local distilleries like Lazy Guy Distillery, a little over a mile away from the brewery, and then barrel-aging them further to add desired flavors and characteristics. Bourbon, gin, rum, and vodka cocktails are available on draft at the bar, along with Dry County's usual roster of beer. The brewery is also producing its own sodas, bitters, and other mixers, and is fully licensed to distill spirits in-house once they acquire the proper equipment. When that happens, co-owner Trey Sinclair hopes to develop a symbiotic relationship between the brewery’s house-made spirits and beer, bourbon-barrel aging future brew projects with Dry County’s own bourbon. “We’re running the gamut just as much if not more than anyone else in the state, and we want to appeal to people inside and outside the Atlanta perimeter,” Sinclair says. “We always have at least 12 distinct beers on tap, and now we have four or more spirits on tap as well. The most important thing to us is that we keep all of our products clean, consistent, and true to style.”

Dry County is conveniently located right down the street from Kennesaw State University, making the taproom a popular watering hole for students and faculty alike. Sinclair even briefly taught a beer-related course in the Culinary Sustainability and Hospitality department. Culinary and biology students often visit Dry County to study the science of brewing, which Sinclair says has provided valuable insight into nuances that can improve the brewery’s experimentation and output. “We’re doing styles that a lot of people are getting into but we’re doing them true to form, not chasing crazy trends and adjuncts,” Sinclair says. “Most beer drinkers, even most brewers, don’t only drink beer. We also like liquor and cocktails, and experimenting with new things, so we want to incorporate all of that into our taproom experience too.”

Dry County’s first commercial spirit release is ready-made Old Fashioned cocktail, aged in a lightly charred barrel with house-made Orange Cardamom bitters and sweetened with raw sugar syrup. It’s available to drink at the brewery along with a flight of other house-made cocktails.

Dry County is throwing an official release party for its spirit line this Saturday, Jan. 19, from 2 p.m.- midnight. Admission is free, and bottles of Dry County Spirits Old Fashioned can be reserved on CraftCellr now for $25. There’s plenty in the works for the future of Dry County this year, including in-house spirit distilling, coffee and cold brew, and plenty of new beer styles and regular releases.

Kennesaw Bourbon Ale | A strong Amber Ale aged on bourbon spirals to imbue notes of vanilla and oak, while maintaining a smooth amber base at 7.5 percent ABV.

Lechuza | Honoring the Spanish word for “owl,” this Mexican Style Lager is light and sessionable at 4.8 percent ABV. It’s extremely popular in the taproom, especially among the Kennesaw State students it was named for.

5 Seasons Westside will host the 15th annual Atlanta Cask Ale Tasting this Saturday, Jan. 19, 2:30-6 p.m. The festival includes more than 55 rare, cask-conditioned ales from around the United States and the United Kingdom, which will be judged by a panel of beer connoisseurs for medals and highly-regarded bragging rights. Attendees also get a free souvenir glass and a vote for the “People’s Choice” cask. Tickets are $43.50.

Scofflaw Brewing Co. announced plans to open a new facility within the The Works, an 80-acre mixed use development project in Atlanta’s Upper Westside. Scofflaw’s new brewery will host a large taproom and outdoor entertainment area, and will also be the brand’s main research and development facility, featuring exclusive releases and behind-the-scenes tours of the brewing process. The Works is currently under construction, with scheduled openings in early 2020, but plans include extensive options for dining, retail, entertainment, offices, green space, residences, and hotel rooms. The centerpiece of dining at The Works is a 16,000-square foot, chef-driven food hall called Chattahoochee Food Works.

Second Self Beer Company released Strawberry Bleeding Heart, a revamp of of the brewery’s seasonal red velvet cake-inspired red ale. The new version incorporates fresh strawberries with cocoa and vanilla for a sweet and fruity finish at 6.9 percent ABV.

Monday Night Brewing Will debut a new tropical unfiltered IPA, 404 Page Not Found, at the West Midtown taproom on Monday, Jan. 18. It’ll also be available in cans at the brewery and in stores on Thursday, Jan. 21. From the new French oak foeders at Monday Night Garage comes Pervasive Species, a mixed-culture ale fermented with lactobacillus, brettanomyces, and a saison yeast strain. It’ll be a light sour ale, finished at only 4.5 percent ABV, and will be available in bottles at the Garage on Monday, Jan. 21.