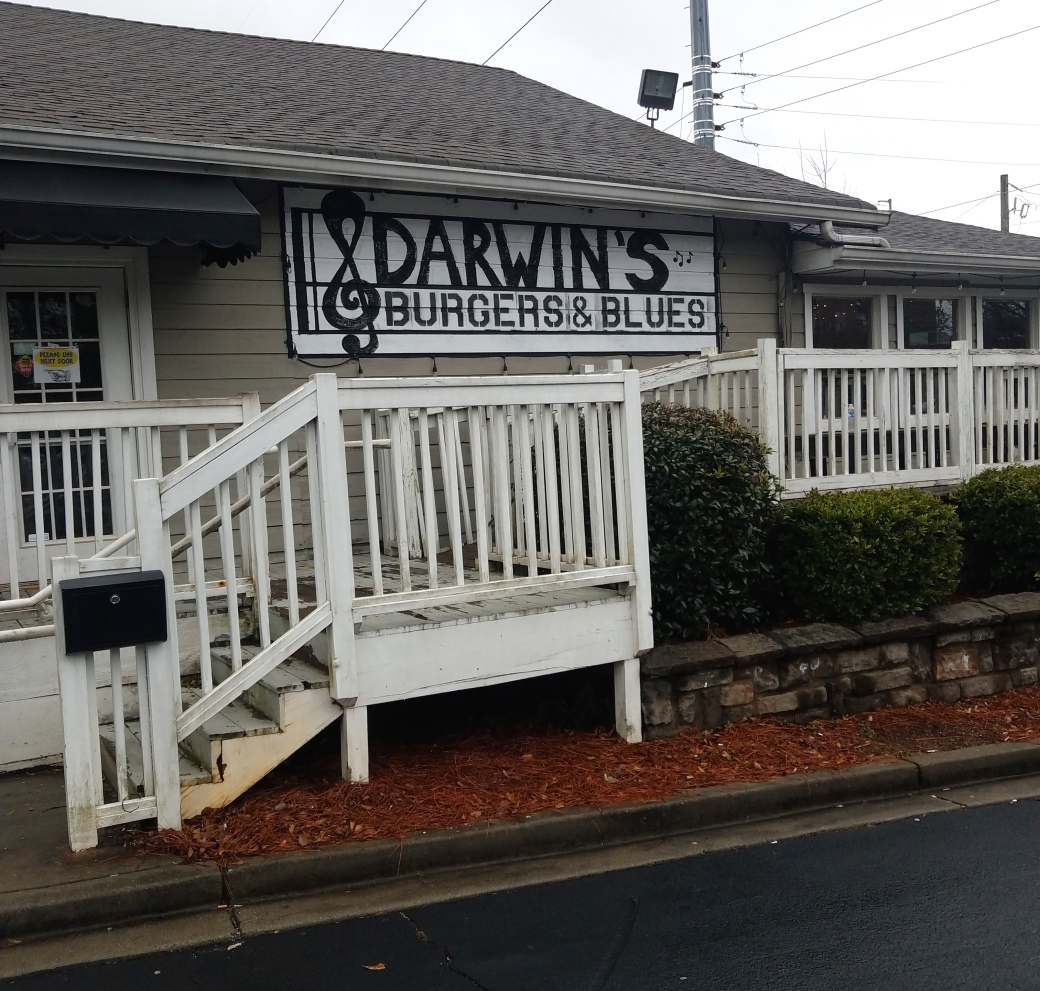 When most people think of Atlanta-based blues joints, a handful of well-known, long-established names rolls off the tongue. Blind Willie’s, the Northside Tavern, and Fat Matt’s Rib Shack have been churning out blues from local and national acts for decades, making them the go-to destinations for those who want to get their mojos working. But since 1995, another place has been gaining regional traction and national exposure, despite — or perhaps because of — its location just outside the perimeter (OTP). Sandy Springs-based Darwin’s Burgers and Blues has quietly but consistently kept the faith in the northern suburbs of Atlanta, serving as an oasis for the blues faithful wary of tackling highway traffic. It’s also the only OTP club that books nationally touring blues talent.

The venue began life in a shabby yet endearing location on Roswell Road in Marietta. Initially started by Kay Rowedder, Darwin’s thrived, notwithstanding a run-down building, iffy bar food, a clumsy layout, and limited parking. Rowedder built its visibility by booking nationally recognized acts like Jason Ricci, Tab Benoit, and Chris Duarte along with higher-profile local musicians such as Barry Richman and Michelle Malone. After a heart attack forced Rowedder to sell the club, the building fell into disrepair and was condemned in 2010. It was then bought by Lindsay Wine,Jonathan Aiken, and three others who physically revived it and rekindled the magic when they reopened it in 2011, even winning the prestigious Keeping the Blues Alive award in 2016. Aiken and Wine then moved Darwin’s to its current location — the old Steve’s Live Music at 234 Hilderbrand Drive in Sandy Springs — in January 2017, which provided about 100 more seats, and better parking in a building that wasn’t falling apart.

Aiken and Wine recently took a sabbatical, and Yvette Cole, a longtime customer-turned-server, accepted the general manager position in October 2018. Cole has been in restaurant management before, but booking music is new to her résumé. “We’ve been called Sandy Springs’ best-kept secret,” she laughs. “We’ve done more marketing and advertising lately, so people know we’re at that location.” At Darwin’s, the talent gets 100 percent of the door and all of the money made from merchandise sales. “We make Darwin’s run strictly on the crowds … And the bands are happy with that as well. We keep going based on our food and alcohol service.”

Cole has an ongoing dialog with George Klein of the Atlanta Blues Societyand other similarly sized clubs that book roots acts to stay informed on national talent, but locals consistently draw large crowds. “Some of our favorites are Charlie Wooten, Cody Matlock, and Barry Richman for sure. I’ve booked him every month in 2019,” says Cole. “The Cazanovas are one of our favorite local bands. They do jams for us too.” (Check them out February 16).

Darwin’s can’t survive on blues alone, though, so the club has expanded into other genres and events. “The area grows, the times change, and even though we are majority blues, we try to branch out to every genre of music,” Cole says. “Why not let everybody have fun?”

This explains the new weekly karaoke night on Tuesdays. Darwin’s also features live music on Wednesday and Thursday afternoons from 1-4 p.m., and on Saturday from 1-6 p.m. It's an unusual concept, but one Cole feels helps attract business people who want something different with their lunch. On Sundays, Darwin’s occasionally hosts competitions for local school kids, a family-friendly affair that gives back to the Sandy Springs community. They also have gospel shows on Sundays, once a month. Cole’s clearly proud of Darwin’s diverse schedule and exudes the energy of an adventurous entrepreneur when she says, “Anything that’ll bring a crowd in here, we’re willing to try at least once. We just want to make Darwin’s grow, and we want the community to have an influence on that.”

In more Darwin’s news, the Atlanta Blues Society’s January 12 benefit — hosted by the club for the three acts headed to Memphis to compete in the International Blues Challenge — raised over $2,200. It’s the largest amount of any raised during the previous fundraisers. The money will cover the artists’ travel expenses as they vie for honors at the festival.

Valentine’s Day might make February the month for sweethearts, but blues fans also have a lot to love.

Sat., Feb. 16
— Delbert McClinton, Variety Playhouse: The iconic Americana veteran, now pushing 80, has been churning out his greasy gumbo of blues, country, soul, and rock ’n’ roll since the late ’50s. Better catch him now before he retires.

Thurs., Feb. 21
— Luke Winslow-King, Smith’s Olde Bar: This swampy, blues rocker just released the terrific Blue Mesa, his sixth and finest album, so he should be in prime form.

Fri., Feb. 22
— James Armstrong, Blind Willie’s: The California-based bluesman is a perfect example of an under-the-radar journeyman who tears it up on the road but doesn’t get a lot of press. His singing is smooth but his guitar solos sting.

— Los Lobos, City Winery: After nearly four decades on the road, these guys — all original members — mix Latin, soul, rock, and blues with exuberant ease. They are legendary for a reason, and experiencing their high energy shows in a small venue is the best way to understand why.

Tues., Feb. 26
— Southside Johnny & the Asbury Jukes, City Winery: Still tearing into the New Jersey, horn-propelled R&B after all these years. They don’t release albums frequently, but with their catalog of rocking soul, they don’t need to. And Southside is the classic frontman.