BLUES & BEYOND: Dance the blues away 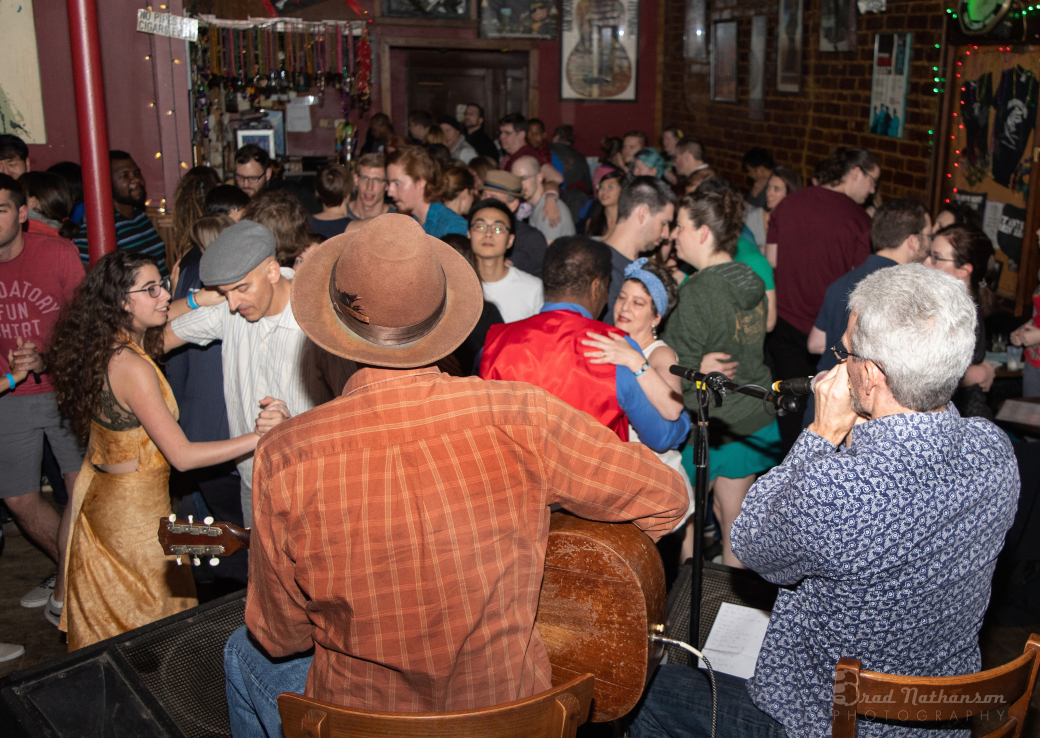 Photo credit: Brad Nathanson
THEY CAME TO DANCE: Mudcat gets the blues dancers’ feet moving.
By Hal Horowitz Thursday May 2, 2019 10:49 AM EDT

Who wanders into the murky, beer-stained recesses of Blind Willie’s on a sunny Sunday afternoon the first weekend of spring, when there is no live band on stage, and no bar service? About 20 people of various ages and ethnicities, determined to learn the basics of blues dancing, that’s who. And they’re all having a blast doing it.

Emily Thomas is one of three organizers and co-founders behind Blues Dance ATL, the collective who’s leading this enthusiastic group. Thomas instructs blues dancing for all levels — today was a beginner’s class — and, along with her husband Benjy and friend Amanda Schoeck, helps synchronize the assembly of other blues dancers for scheduled, mostly weekly get-togethers. That’s where area dancers with various stages of expertise, meet to, well, dance to live blues music. Training days like this small but essential Sunday gathering are part of the overall vision for the organization.

“Blues Dance ATL has three different roles,” Benjy says. “It organizes the annual Brickyard Blues, an event where we rent out venues and hire teachers and DJs to come in from across the country for a major workshop. We also put up a calendar on Facebook and online, where blues bands are playing and blues dancers are likely to show up. Then there are the local lessons that Emily and Amanda teach.”

Although Blues Dance ATL has recently gotten more popular, blues dancing has thrived in Atlanta for for many years — at least before 2008, when Benjy came upon it. Back then, however, the concept was informal and generally disorganized. Dancers were spread over three major blues clubs — Darwin’s, Northside Tavern, and Blind Willie’s — and nobody was coordinating the effort.

Blues Dance ATL formed in 2016, when the Thomases saw how much the scene was growing. “There was a huge opportunity, and there were no classes happening,” says Emily.

The goal was to bridge the live music community with the dancers, and start the blues dance courses, which also began in 2016. “We had all been dancers, veterans on the scene, and we knew each other,” Schoeck says.

They coordinated their individual strengths to foster Blues Dance ATL. Emily brings a classical dance background, has blues danced in five countries on four continents and, with her MBA, works the business side of things. Likewise, Schoeck understands gymnastics and is a CrossFit trainer. Benjy is a technical whiz for the website and is the primary contact with bands.

Other cities have blues dancing organizations, such as Chicago’s Bluetopia, and New Orleans’ Wednesday Blues Dance. What sets Atlanta apart, however, is the convenience of so much quality blues music. “We have access to a wonderful network where you can bounce ideas off of each other, and other organizers, but ultimately the formula is dictated by the community,” Schoeck says. “We have this unique opportunity of having amazing live music constantly.”

It’s a win-win for all involved. “Everybody loves it when we show up,” Emily adds, “because we bring the party. The energy that’s shared between the dancers and musicians is really a special thing.”

Want to be part of the Blues Dance ATL festivities? Check out their Facebook page or www.bluesdanceatl.org for updates on the next get-together, and upcoming blues dance classes. Then get ready to do the Chicago Triple, or the Funky Butt to “Shake Your Hips,” the “Mojo Boogie,” and much more.

May blooms with great blues. Check out these show highlights.

Fri., May 3
— Al Green, Fox Theatre. The ultimate ’70s soul icon emerged from a blues and gospel background; you won’t find many blues lovers that aren’t also Green fans. At 73, he hasn’t lost a step, and those old classics still sound fresh.

Sat., May 4
— Gary Clark Jr., Central Park/Shaky Knees. If the blues is going to expand to a larger, younger audience, it’ll be because musicians like Clark aren’t afraid to push the music’s boundaries into funk, hip-hop, and psychedelic rock, while playing on the same bill as indie rock hipsters like Tame Impala, Cage the Elephant, Beck, and more. We just need a few more of him to make that happen.

— Geoff Achison, Eddie’s Attic. The Australian singer-songwriter, a longtime Atlanta favorite, always brings the goods, and man can he shred! Expect music from his latest album, the swampy Sovereign Town, one of his most intimate releases yet.

Wed., May 8
— Eli “Paperboy” Reed, Vinyl. Young soul shouter Reed comes from the Wilson Pickett school of searing, testifying vocals that make your knees quiver. He’s promoting his new 99 Cent Dreams album that should finally give him the crossover appeal he has been building for over a decade of frustratingly overlooked releases.

— The Lucky Losers, Blind Willie’s. Singer Cathy Lemons and harpist/singer Phil Berkowitz come from Cali to deliver another dose of high energy, good time blues and rocking soul. They blew the roof off the place the last time through, so don’t miss them on this return trip.

Thurs., May 16
— Victor Wainwright and the Train, Connect Live (Woodstock). Savannah-born Wainwright — now Grammy nominated — bangs the 88s like he sings, with passion and intensity. Boogie-woogie, barrelhouse, New Orleans-style — Wainwright’s got ‘em all down. His knockout Train band pushes every show to an experience you’ll never forget. He didn’t win 2016’s prestigious B.B. King Entertainer of the Year award for nothing.

Sat., May 18
— The 7th Annual Harp Blowout, Blind Willie’s. The lineup wasn’t firmed up at press time, but this is the place to be for blues harmonica players to see how it’s done by the pros. Atlanta veterans the Cazanovas host.

Mon., May 20
— Nick Waterhouse, Terminal West. Soul/blues singer and guitarist Waterhouse is all about groove as he mixes garage rocking with blues and R&B for an explosive sound. Four albums in and he’s firing on all cylinders with a horn-enhanced band that sizzles and burns.

Thurs., May 23
— Jamie McLean, Gypsy Rose (Roswell). The ex-Dirty Dozen Brass Band singer and guitarist has been solo since 2010, ripping out rootsy blues, tough R&B, and swampy Americana without horns but lots of soul.

Thurs.-Fri., May 30-31
— Christone “Kingfish” Ingram, Eddie’s Attic. Guitarist Ingram — Kingfish to you — has just released his Buddy Guy-approved debut. But a rigorous touring schedule of major blues festivals has made him the young gun on the blues scene to watch. So much so that two shows had to be booked to accommodate fans. Expect both to sell out.

Fri., May 31
— The Woolly Bushmen, Star Bar. Tough, tensile, and bluesy, this garage-rocking trio straight out of the Standells, Animals, and Stones school is rough and ready to rock like its 1965.

Tues., June 4
— Katie Toupin, Aisle 5. Introspective singer-songwriter Toupin left the Americana-leaning Houndmouth a few years ago, but has recently released a few tracks from her upcoming solo project. The songs are darker and bluesier than her earlier work, and a promising fresh start..