The dense, gripping docudrama “Mindhunter” exemplifies some of the pluses and minuses of Netflix as an entertainment platform. One of the show’s driving forces is filmmaker David Fincher, who made expensive, challenging films for adults like Fight Club and Gone Girl until such movies began falling from Hollywood’s favor. At its best, “Mindhunter” plays like a spinoff of Zodiac, Fincher’s masterpiece about the Zodiac murders. But if Netflix doesn’t actively support a show, it can disappear among all the other content on its feed. “Mindhunter” is one of Netflix’s best shows, and subscribers may not even know it exists.

Debuting in 2017, the series tracks the origins of the FBI’s Behavioral Science Unit in developing methodology for profiling serial killers, primarily through the eyes of two fictionalized special agents: idealistic, intuitive boat-rocker Holden Ford (Jonathan Groff) and gruff, by-the-book family man Bill Tench (Holt McCallany). Most episodes hinge on long interviews with captive serial killers: The new season’s fifth episode includes a showcase scene with Charles Manson (Damon Herriman, who has a brief appearance as Manson in Quentin Tarantino’s Once Upon a Time… in Hollywood). 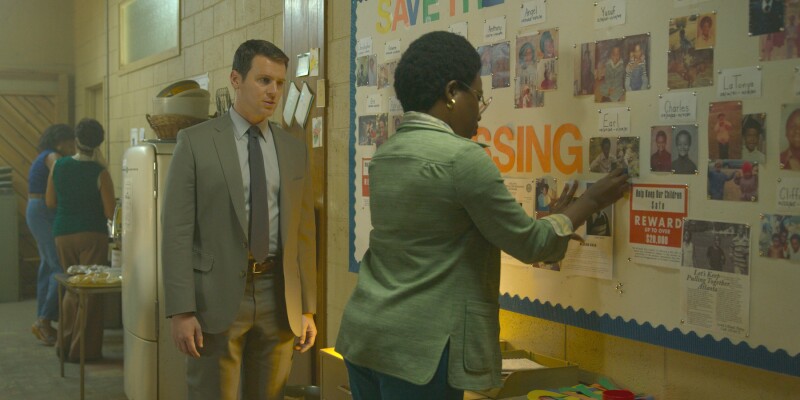 
“Mindhunter’s” nine-episode second season dropped August 16 and rectifies some flaws of the first, expanding its scope and emotional palette. A subplot early in the season, the Atlanta missing and murdered children case from the late 1970s and early 1980s, becomes the primary focus for its second half. Giving the agents a high-stakes active case provides the show with more dramatic urgency, adds a more diverse cast, and allows “Mindhunter” to address issues of race, politics, poverty, and law enforcement that remain (depressingly) relevant to America almost 40 years later.

While filmed in Pennsylvania, “Mindhunter” adequately captures Atlanta of the era: Ford stays at the Omni Hotel, sees kids hanging out at the Gold Mine video arcade, and first meets the victims’ mothers at Paschal’s Restaurant. The only detail that struck me as inauthentic were the bridges that law enforcement stakes out, which looked more like structures you’d find in the Rust Belt than over the Chattahoochee.

Never a program likely to indulge in cop show clichés, “Mindhunter” proves fairly respectful of the Atlanta case, which encompassed the loss of at least 30 people, mostly black male adolescents. Like 2018’s true-crime podcast “Atlanta Monster,” the show wades into the investigation’s controversies. From the beginning, Agent Ford advocates for searching for a black male in his 20s or 30s and discounts leads, some involving white racists, as not fitting his profile for a serial killer.

In the season finale, Wayne Williams (an effectively cryptic Christopher Livingston) becomes the prime suspect, although sharp-eyed viewers will catch glimpses of him in earlier episodes. Ford is, in effect, accused of “profiling” in its more recent, negative context, presuming someone of guilt for superficial reasons with only circumstantial evidence to support his theory. The show hints at avenues unexplored and mentions the local and national political pressures that complicate the investigation. The Atlanta missing and murdered children case can feel like a wound that never really heals, and “Mindhunter” embraces its ambiguities.

If you’ve never seen “Mindhunter” and want to jump in with its second year, considering skipping the season premiere, which is mostly table-setting and tying off loose ends. As a cerebral but compelling procedural drama, “Mindhunter” feels like a worthy heir to HBO’s “True Detective,” if only more people knew about it. How excellent shows can get so overlooked in our modern media landscape remains an enduring mystery.

Cameo Role: Speaking of Netflix, Season 3 of “Stranger Things” gave a winning walk-on role to Atlanta actor Dan Triandiflou. A former regular at local playhouses such as Dad’s Garage, Triandiflou played the jerk who sputters with outrage when Hopper and Joyce (David Harbour and Winona Ryder) commandeer his car in the fifth episode. Fun fact: the Internet Movie Database credits the role as “Rich Douchebag Todd.”

Coming Attractions: Emory University’s Emory Cinematheque film series presents a must-see program this fall with a retrospective on writer/director Billy Wilder. Sharp and cynical, Wilder’s work has aged well and includes such classic film noir as Double Indemnity and Sunset Boulevard and comedies like Some Like It Hot, The Apartment, and One, Two, Three, a lesser-known satire that combines the Cold War and Coca-Cola.