The Who pick up their guitars and play — 'just like yesterday' 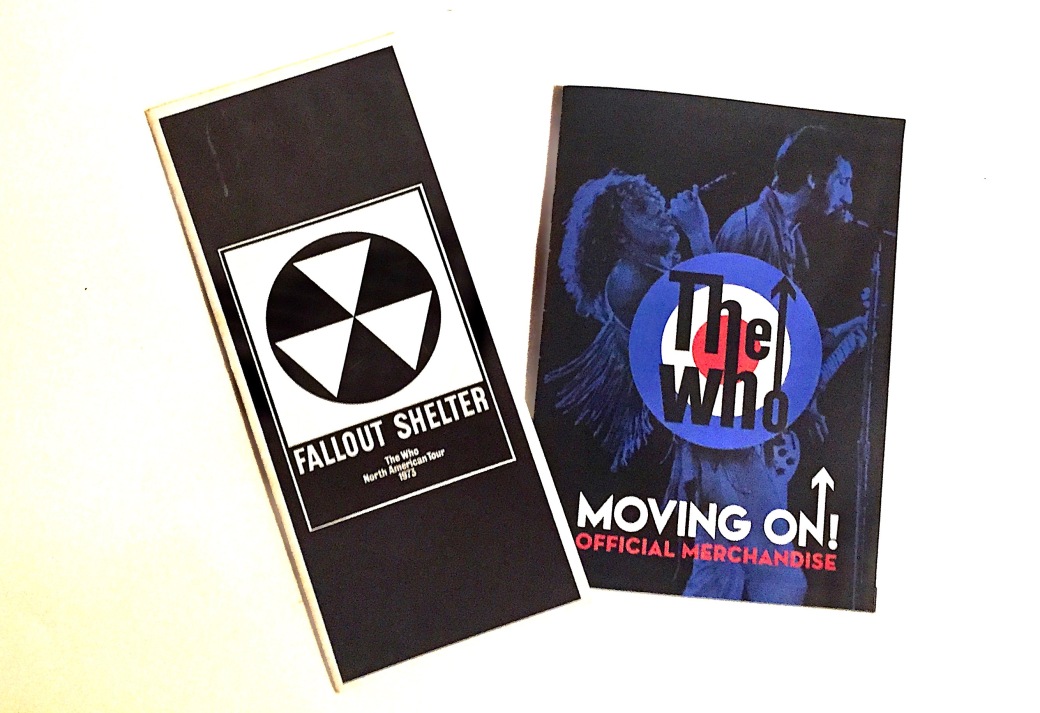 Photo credit: Tony Paris Archives
'We all know success when we all find our own dream:' Brochures from The Who tours then and now.
By TONY PARIS Saturday September 28, 2019 08:43 am EDT

Walking towards the sports arena where The Who were to perform Wednesday night, September 18, I was reminded of crossing the same parking lot 46 years earlier to see the British band for the first time.

That Tuesday night, November 27, 1973, me and a carload of high school friends stumbled toward the Omni, then home of the Atlanta Hawks and the Atlanta Flames. We were free. Free from our parents. Free from classes. On our own for the night. We were high on rebellion — if that’s what you call a couple of joints, a few tallboys, and some swigs from a shared bottle of Jack Daniels. We were rebelling against home and high school authority figures, the main embodiment of oppression we knew back then, turning a blind eye to the real injustice and inequity of a world that we would discover soon enough. We were living through our own “teenage wasteland” during the Nixon era, and The Who provided the perfect soundtrack for our teenage angst during those high school days, bumming cigarettes in the smoking area, hiding in the underbrush to not run cross-country, going to Friday-night football games to get high under the bleachers or to cop a feel. The Who, with their anthems heralding freedom and defining love in a song, were what we needed to make it through. They gave us the power to experience life “anyway, anyhow, anywhere.” To see The Who in concert was to be free, and “freedom tastes of reality.” We sought refuge from the emotional rollercoaster of adolescence in the songs of The Who, and going to see them in concert on the band’s “Fall Out Shelter” North American tour provided us with the inviolable sanctuary we so desperately sought.

Inside the State Farm Arena last week, the longhaired and acne-plagued audience of my misspent youth had grown up to now suffer from male-pattern baldness and too much Botox. Any of us who had hoped to die before we got old had failed miserably. There were some teenagers in the audience. You couldn’t tell if they were in their parents’ tow or if they wanted to see the band that provides the theme songs for all four of the “CSI” television franchises.

Those filling the seats for this, The Who’s “Moving On” Symphonic Tour, created a sea of gray. The median age of the audience certainly colored any anticipation of what to expect from The Who, at least from the two surviving members, Roger Daltrey and Pete Townshend, now both in their mid-70s.

With a full orchestra commanding the stage — in Atlanta members of the Atlanta Symphony Orchestra joined together with the band; other cities using local symphony members — the area in which members of the rock band could set up was relatively small, especially given the size of arena stages these days. The closeness of Daltrey and Townshend to each other, and to the rest of the band — second guitarist Simon Townshend (Pete’s brother), drummer Zak Starkey (Ringo Starr’s son), bassist Jon Button, and keyboardist Loren Gold — worked to the group’s advantage, keeping them together as a tight group physically and musically. As such, they rocked out, as a rock band should, with the added intensity of Keith Levenson’s orchestral arrangements adding a depth and forcefulness to the songs rather than getting in the way of anything the band attempted. Not only did the songs from the rock opera Tommy and Quadrophenia come to life as never before, but other selections from the band’s extensive catalogue were revived and brilliant in their presentation.

And Townshend and Daltrey? It may have taken Daltrey, dressed in black jeans and a form-fitting t-shirt, a few songs into the set to find his voice, but once he did, he was in fine form, hitting all the notes and commanding the stage with his signature whip — using the microphone as a lasso — as if the years hadn’t passed at all. Townshend was “on” from the minute he took the stage, joking that it was “nice to be back in Elton John’s hometown,” and playing guitar with the same energy he displayed as a young man when he had nothing but something to prove. Watching the big screen monitor close-ups while he was playing electric guitar, you expected blood to start pouring from his fingers, as he eschewed a pick to dig into the strings with his bare fingers for the big riffs.

Certainly, both seemed to be enjoying themselves, and genuinely sincere when talking to the audience, admitting a love for their fans who have supported them for five decades, and appreciating the opportunity to still be able to take their music on the road. Giving props to Levenson and his work with the orchestra, it was obvious they were as energized from his arrangements as the audience was. The Who, at this point down to Townshend and Daltrey after the deaths of original drummer Keith Moon and bassist John Entwistle, were alright.

Bookending their time on stage with condensed versions of Tommy and Quadrophenia (both performed with the orchestra), the “band” stretched out on their own midway through the show, highlighting a tight set comprised of anthems like “The Kids Are Alright,” “I Can See for Miles,” “You Better, You Bet,” and a particularly poignant “Won’t Get Fooled Again,” performed by the Who left standing, Townshend on acoustic guitar accompanying Daltrey on vocals. With the new members of the band returning to the stage, the musicians were joined by the orchestra’s first violinist and the ASO’s cellist for a moving “Behind Blue Eyes.” Fittingly, the concert closed with “Baba O’Riley,” with first violinist Katie Jacoby (not a member of the ASO, but a part of The Who’s touring entourage) taking center stage and trading licks with Townshend, offering an extraordinary end to a magical, wondrous evening.

Onstage Townshend and Daltrey proved 70 to be the new 30. Though they now may be “moving on” rather than providing shelter for those in the throes of growing up — “I’m all mixed up, but I know what’s right” — they are doing so with style and grace. Will this, in fact, be the last Who tour? Who knows.

Walking back across that parking lot after the concert, I wondered if this was their last stand. The day’s date flashed in my mind, September 18, 2019. The 49th anniversary of the death of Jimi Hendrix, the flamboyant guitarist whose early career in London intermingled with that of The Who. It was then I realized the first time I saw the Who, November 27, 1973, would have been Hendrix’s 31st birthday. The beginning and the end.