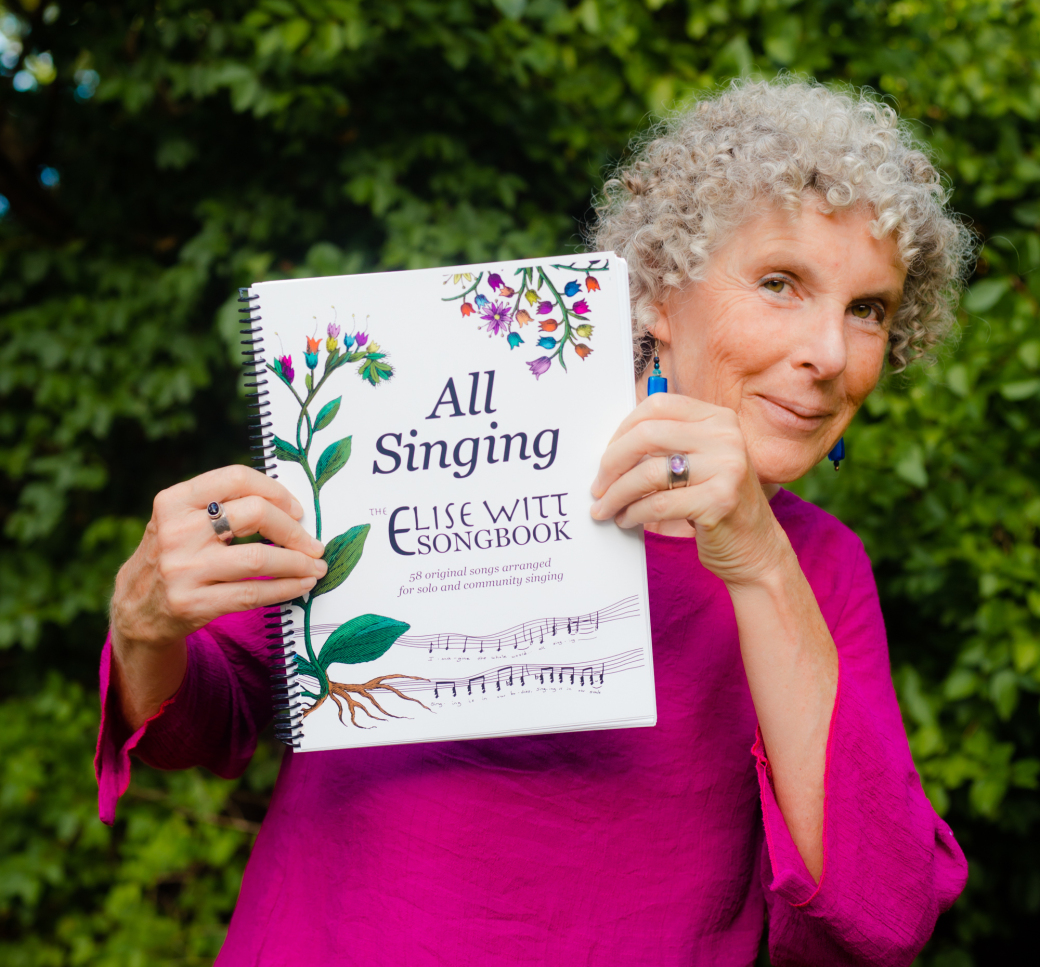 Whenever there’s a discussion of Atlanta folk music, one name is always in the mix — Elise Witt. But her presence in Atlanta is just one spot on the globe where she has taken her talent, her commitment to truth, and her ideas. Few contemporary artists come close to matching Witt’s impact on the number of communities she has become a part of in order to help them through her deeds and music. From her modest Pine Lake home to countries the world over, Witt reaches people everywhere with her determined sense of social justice and equality for all and her commitment to advocating for the neediest among us.

“A life well lived” is a phrase often used in the past tense, however it applies perfectly to Witt’s past, present, and future. On Saturday November 23, __ALL SINGING: The Elise Witt Songbook Release Concert, will be held at the Chosewood Arts Complex on McDonough Boulevard. The event is a living celebration of her amazing work, a book release party, and a concert featuring many of Witt’s colleagues from her years in the field. A benefit for the Global Village Project (a DeKalb County middle school for refugee girls where Witt is the Director of Music Programs), the night will be filled with music from around the world, and of course, plenty of Elise Witt tunes.

Many of Witt’s friends and colleagues will be participating in the upcoming celebration, among them, American folk singer John McCutcheon, himself a socially and politically conscious songwriter who has also recorded many children’s albums. He’s a kindred spirit of Witt’s — and excited to take part in the concert. Deeply appreciative of her work, he notes that Witt’s “extensive repertoire and wordsmithing have left a big impression on those who have been part of her mission. I've known Elise since the mid-1980s, and her adventurous musical spirit, her utilization of many languages, her generous support of other musicians and unique collaborations … she is one of the most eclectic and dedicated songwriters I know.” McCutcheon proudly adds, “I'm especially flattered that she asked me to sing ‘Blessed Nation,’ a poem of my dear friend Pete Seeger's that she set to music with his blessing. It's the wedding of two of my favorite musicians.”

All Singing: The Elise Witt Songbook has been in progress for many years, and includes both “58 original songs arranged for solo and community singing” and memoirs of Witt’s incredible experiences. About the development of the book, Witt says, “The material has been developed over a long time, but we have focused on creating the book for the last two years.”.

Atlanta musician DeDe Vogt, who produced three of Witt’s solo albums, will be in attendance at the celebration. They have a mutual admiration society, as Vogt reflects, “Working with Elise in any situation — live performances or in the studio — is a pleasure. She is a delight. She is never confined to any one approach, with so many wonderful textures.  Her diversity in both music and lyrics is 'all over the place,’ but it works!” She laughs. “Elise usually has a clear idea of what she wants, but also an open mind. She is inspiring, both as a musician and a person.”

Witt came a long way to get to Pine Lake. Originally from Switzerland, she grew up in North Carolina, and has lived in Atlanta since 1977.  Her family tree, mostly Swiss but with multiple other bloodlines merged together, includes her distant “great-times-four uncle” Felix … Mendelssohn. It is no surprise that, being an immigrant herself, she has taken on the role of both an advocate and cultural teacher for many of Atlanta’s refugees. And while “globalism” may seem like a toxic concept to some, Witt sees it as an essential aspect of who we are as humans, especially in the context of singing. “I call my music ‘global, local, and homemade songs’,” she says, “but it really only comes from the local level. I have had some deep dives into other forms of cultural music, and I try to learn directly from the people I meet, from the face to face experience.”

In 1977 Witt and a group of like-minded artists of assorted talents moved to Atlanta to form the Theatrical Outfit, which still exists today. “We were the founders, and all lived together in a big house, where we shared our arts grant salary 12 ways!” During these early days, Witt began teaching singing classes in the organization, and has been doing so ever since. “I started collecting songs that would be easy to teach, and fun to sing. Lots of rounds, and unusual harmonies.” Clearly, the seeds of the songbook were planted early.

When she left the organization, Witt formed the Small Family Orchestra to back her up on various live performances. “We were together for 10 years, and recorded five albums,” she recalls. “My sister, her husband, and our friends initially played at Callanwolde, and then we got support from the Southern Arts Federation to tour and promote folk music.” The SFO was quite unusual in their instrumentation and song repertoire, covering obscure folk tunes and material from a little-known but much revered North Carolina band called the Contenders, who Witt identifies as “a big influence.” During this period, she was also inspired to start writing her own songs.

A fruitful detour with the Atlanta Symphony Orchestra Chorus made a lasting impression, and the lessons she learned from the late Robert Shaw still ring true. “When I auditioned, I sang in German. I loved Robert Shaw so much. He may be the greatest choral conductor in the country, so meticulous in his techniques.” Adding to Witt’s resume was the opportunity to represent Georgia at the Kennedy Center 25th Anniversary celebration. Add sponsored music trips to Nicaragua, South Africa, Italy… and the story tells itself.

While many of Witt’s projects and collaborations have been national and international in scope, one of her most rewarding partnerships was more local, that with the late Joyce Brookshire, a Cabbagetown resident who created some powerful folk songs reflecting social issues she observed growing up in the shadow of the Fulton Bag and Cotton Mill. Brookshire, who passed away two years ago, could neither write music nor play an instrument. At the Patch, a community center for Cabbagetown residents she had set up, Brookshire would sing her songs to Witt, who figured out the chords for her. Witt fondly recalls their time together. “I worked with Joyce for 40 years. She wrote such very eclectic songs, and figuring them out on guitar was so helpful to me.”

Decatur-based singer Caroline Aiken, who has worked with Witt off and on for years and will also sing at the release party, reflects on Witt’s talents and her amazing cultural contributions: “Elise has been an inspiration for many years! I've admired her ability to morph between countries, languages, bringing her bright music and her loving energy to so many over the years. Her voice is crystalline, and she inspires people to sing without fear.

“She's created a coming together of musical differences, combining people of color, indigenous people, women's rights, and brought us all together to learn about each other. Elise has my complete admiration for her years of bringing people together, always in the name of service.”

In a world where so much divisiveness has splintered families, friendships, and countries, Elise Witt believes in living a life of optimism, sharing, and joining us all together, through music.

Note about this show from the Global Village Project:

Admission to the Nov. 23 concert at the Chosewood Ballroom is by sliding scale $15-$75 (please be affordable and generous), with all proceeds to benefit the Global Village Project. Preceding the concert, at 6:00 p.m., there will be a VIP reception in the Chosewood Gallery, with a Book Signing from 6:00 - 6:30 p.m. Tickets for the VIP Reception are $125.