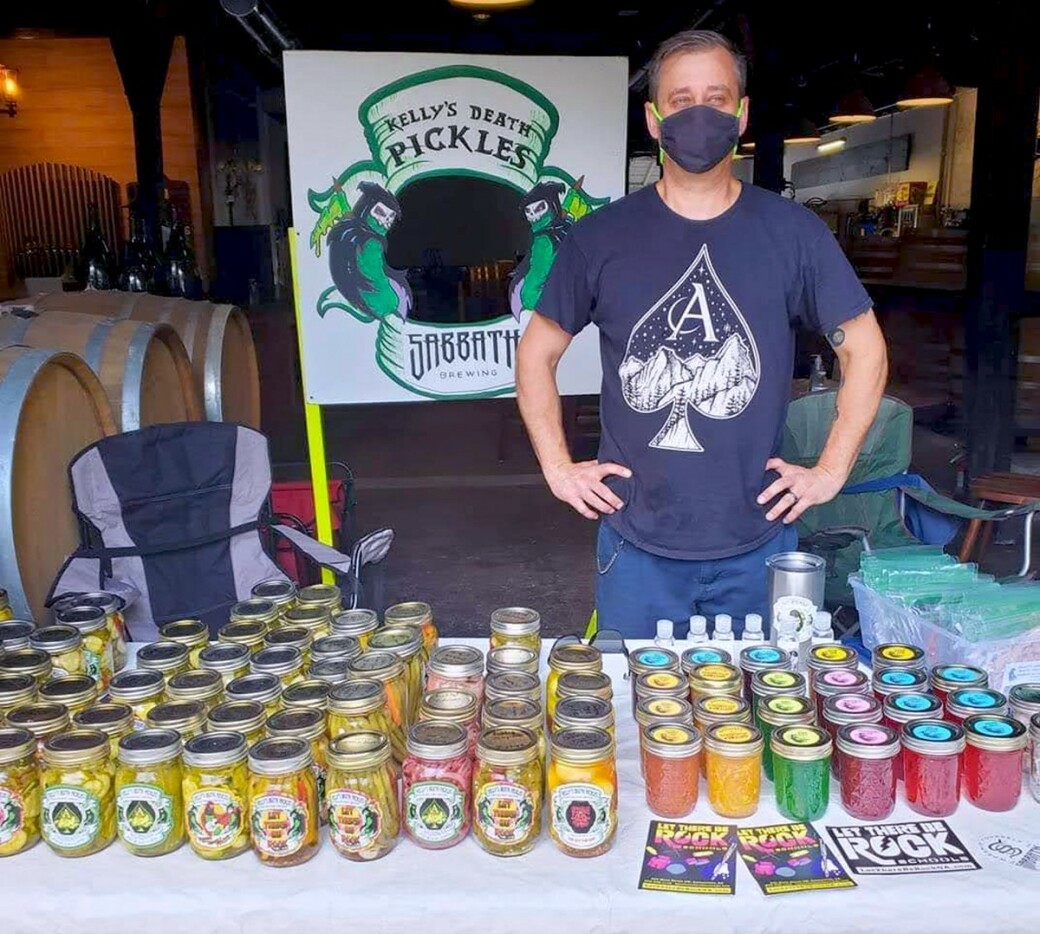 Photo credit: Courtesy of Kelly's Death Pickles
KELLY'S DEATH PICKLES: Kelly Hester, one of many Atlanta musicians to find a second life as a purveyor of fine foods, hawking his pickles when not moshing in the pit.
By CHAD RADFORD Thursday September 3, 2020 03:40 PM EDT

Argosy played a key role in elevating the East Atlanta Village as a beacon for nightlife. Since 2013, the team that owns and operates such night club institutions as MJQ Concourse, The Drunken Unicorn, and the Bookhouse Pub — Ben Rhoades, Armando Celentano, and Donald Durant — have flourished at 470 Flat Shoals Avenue SE. The bar and restaurant’s custom-built wooden interior fosters a warm environment where themes of seafaring fantasy hang in the balance with the upscale and casual dining. The beer list is off the charts, and the wood-fired pizza, the small plates, and the Impossible burgers are among the neighborhood’s most sophisticated offerings. Later in the evenings, check out the DJs crafting a sleek ambiance. The back room, dubbed “the Brig,” is where the DJs spin a slightly harder-edged set, surrounded by Skee-Ball machines and board games, while a giant octopus hanging from the ceiling surveys the scene.


Bankhead Seafood has been a Westside staple for more than 50 years. The famed Grove Park eatery even gets a shout out in the title track to Goody Mob’s Soul Food album, when Big Gipp raps, “Miss Lady acting like we in jail / Says she ain't got no extra hushpuppies to sell / Bankhead Seafood making me hit that door / With a mind full of attitude.” When former owner Helen Harden closed the restaurant in 2018, rappers Killer Mike and T.I. stepped in to keep the business open and take it to the next level. Since then, they’ve literally hit the streets with the Bankhead Seafood Truck, taking the famed $8 special (a piece of fish and two hushpuppies) to a larger audience, while the refurbished brick-and-mortar location at 1651 Donald Lee Hollowell Parkway prepares to reopen next spring.


Boggs Social & Supply at 1310 White Street SW is an essential Westside hangout. Sure, the BeltLine and the White & Lee development, aka Malt Disney, are great places to whittle away some hours, but Boggs offers a low-key escape from the sun and the family scene. Created by Gaja Korean co-owner and punk rock photographer Tim Song and Earl co-owner Shane Pringle of the bands Tiger! Tiger! and Bad Spell, Boggs’s shaded patio, unbeatable domestic and imported beer selections, and its “Heaps” menu make this an essential outpost for Southwest Atlanta. Look for the Gaja Korean food truck that’s become a permanent fixture in the parking lot, and the Ria’s Bluebird truck parked there for Sunday brunch. 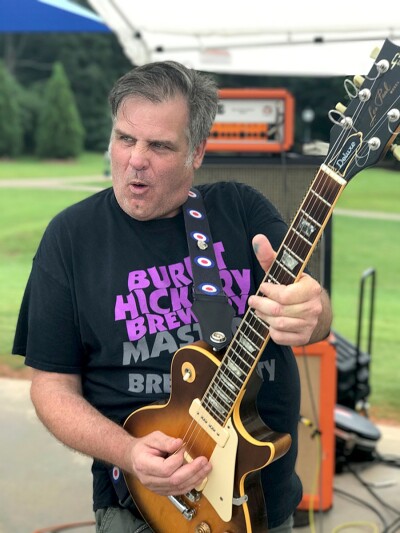 Burnt Hickory Brewery — While Scott Hedeen worked as an Emmy Award-winning TV cameraman, he dreamed of one day taking his love of craft beer to the professional level. To raise the funds needed to get his Kennesaw-based Burnt Hickory Brewery off the ground Hedeen sold his massive collection of punk rock LPs and singles — he still has crates of records for sale by the bar. Music is an essential part of this O.T.P. outpost of underground culture, as some of BHB’s most popular hits are named after Atlanta bands. When you walk into Kroger and see those Drivin N Cryin “Straight To Hell” IPAs in the refrigerated aisle, that’s Hedeen’s work. As is the Order of the Owl Chocolate Orange Stout, which packs a whopping 9 percent ABV. Punk, metal, and all things heavy are BHB’s forté — Hedeen even played guitar with Atlanta’s reformed version of LA hardcore outfit the Cheifs. If you make the drive to BHB (at 2260 Moon Station Court NW # 210), ask him about the Didjits Blood Orange IPA and Die Kreuzen’s Imperial Pumpkin Pie Porter. He’ll regale you with secret recipes and tales of crossing paths with punk royalty. Bring a designated driver.

Emerald City Bagels — Jackie Halcrow is a punk rock DJ-turned bagel queen. Working alongside her mother, Deanna, Halcrow upset Atlanta’s bagel scene in 2015 when the two launched Emerald City Bagels. Deanna’s passion for creating food blended with her daughter’s culinary school training at The Art Institute of New York City, and Jackie’s experiences as a pastry chef proved indispensable when they hatched an idea to revive the timeless art of creating long-fermented, boiled, and baked bagels. What began as a series of pop-ups all over Atlanta finally settled into the brick-and-mortar shop at 1257A Glenwood Avenue SE in the East Atlanta village.


Fellini’s Pizza and LaFonda Latina — Since the early ’80s, Clay Harper has carved a singular lane through Atlanta’s music scene, while serving as co-owner of both the Fellini’s Pizza and LaFonda Latina restaurants, each with multiple locations around town. Highlights from the singer, guitar player, and songwriter’s body of work include his 1986 debut with The Coolies, an LP titled dig …?, which rounded up 10 punk covers of Simon and Garfunkel songs. Over the years, he’s also appeared alongside everyone from slain journalist Daniel Pearl in The Ottoman Empire to power pop icon Wreckless Eric for the 1997 CD East of Easter. His latest recording, a self-released CD titled Dirt Yard Street (out October 2), is a stripped-down album that features contributions from Kevn Kinney of Drivin N Cryin and Tom Gray of the Brains and Delta Moon, and design work by Grammy-winning artist Susan Archie.


Kelly’s Death Pickles — Kelly Hester is a longtime fixture of Atlanta’s metal, punk, and alternative rock scenes, and he’s kind of a big dill. In 2017, Hester was struck by the idea of taking home canning to the next level when he started naming jars of pickles, jalapeños, and other veggies after Atlanta metal bands. Gnomonaut, Death Of Kings, Order of the Owl, Fiend Without a Face, Dead Now, and more have been blessed with their own brands of Kelly’s Death Pickles. Find Hester hosting Kelly’s Death Pickles pop-up shops at local breweries or by the merch table at any number of Atlanta rock shows — when he’s not in the pit.


Kimball House and Watchman’s — Gentleman Jesse Smith is no stranger to Atlanta’s post-hardcore, power pop, and garage punk scene. His name is synonymous with bands such as Carbonas, Hyena, Gaye Blades, COPS, the Kassabone Red, Some Soviet Station, and of course, Gentleman Jesse and His Men. Smith is a songwriter of the highest order around these parts. Over the last several years, however, he has channeled his passion and commitment to high standards into the delectable food and drinks, top-notch staff, and the best oysters in the city at Kimball House (303 E. Howard Avenue, Decatur) and Watchman’s (99 Krog Street NE). Both operations were years in the making, masterminded by Smith and his friend, former Douchemaster Records label owner Bryan Rackley, along with Miles Macquarrie, and Matt Christison.


Miller Union — Before receiving the James Beard Foundation’s 2017 “Best Chef: Southeast” award, Miller Union co-owner Steven Satterfield was immersed in Atlanta’s music scene. From 1994 through 2000, Savannah-transplant Satterfield sang and played guitar with indie pop outfit Seely. The group’s ’96 debut CD, Julie Only, gave them the distinction of being the first American band signed to British indie label Too Pure, once home to PJ Harvey, Stereolab, Mclusky, and others. Satterfield later sang and played guitar with indie rock act Silver Lakes for the 2006 CD, The Great Pretenders. Since then, Satterfield has emerged as a leader of Atlanta’s food scene, who remains dedicated to supporting local farmers and serving up a modern take on Southern fare at 999 Brady Avenue NW


Plates & Crates — Dillon Vaughan Maurer, aka Lobsterdamus, kicked off Plates & Crates in 2014 as a means of blending his two passions in life: music and food. While spending hours scouring record stores, getting his hands dirty digging through dusty crates of LPs and 12-inch singles, Maurer always worked up an appetite, but there was never anything nearby to eat. With a lifetime of culinary experience under his belt, he created a new garden party series. Plates & Crates marries his desire for scoring obscure musical gems and eating fancy bites. For each installment of Plates & Crates, vendors from all walks of life sell records, and a who’s who of DJs spin whatever they feel like spinning. Keep your ears to the ground, though. Maurer relies solely on word-of-mouth and social media advertising to broadcast his menus and dates.


Venkman's — In September of 2015, Venkman's opened its doors at 740 Ralph McGill Boulevard in the Old Fourth Ward as a restaurant and music venue. The brainchild of PleaseRock and Yacht Rock Revue cohorts Nicholas Niespodziani and Peter Olson, Venkman’s took anchor in a casual neighborhood spot that boasts live music seven nights a week — when the world is in solid, working order — and a menu that compliments the evening’s musical selections — from jazz, bluegrass, salsa, swing, and AOR acts — with style and sophistication. —CL—