BANKSY: ‘There’s nothing more dangerous than a person who wants to make the world a better place’ 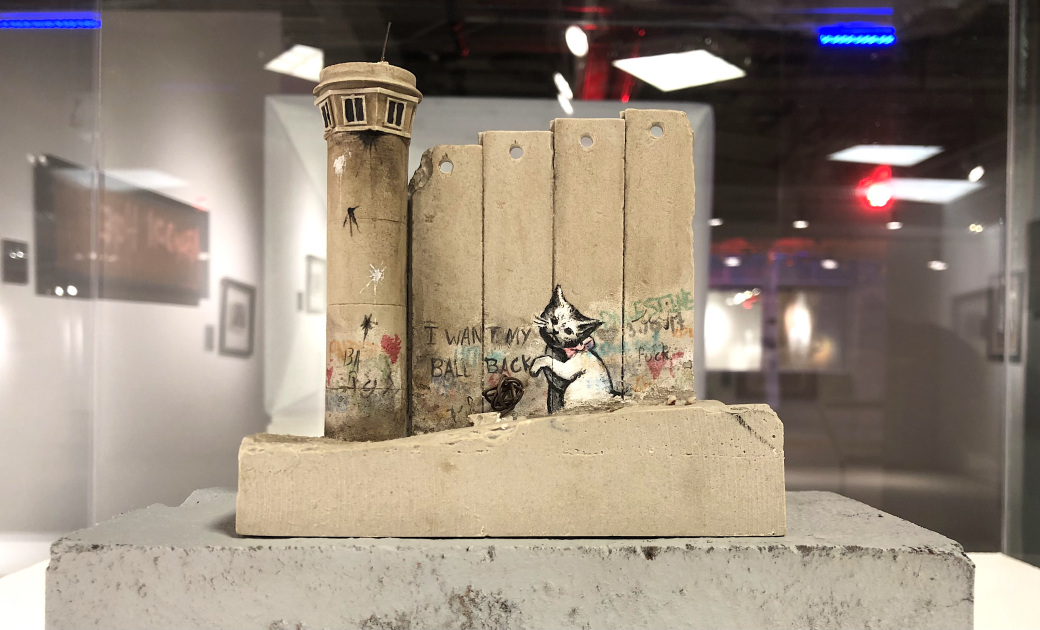 Photo credit: Tony Paris
I WANT MY BALL BACK: From Banksy's dystopian 'The Walled Off Hotel' installation, Palestine, 2018.
By Tony Paris Monday September 20, 2021 11:59 AM EDT

The title of the exhibit, “The Art of Banksy: Without Limits,” which opened Sept. 3 in Atlanta, is an accurate one. It describes not only the event itself, but the concerns raised by many regarding such Banksy exhibitions that are being produced around the world. These exhibits are not authorized by the graffiti artist provocateur known as Banksy, therefore the items, images, and artifacts on display are “without limits,” that is, not limited solely to original works of art created by Banksy, but, in some cases, expertly created facsimiles of his works. At the same time, the exhibit is “without limits” in that it is not limited to being sanctioned by Banksy. But then, when has Banksy ever done anything that has been sanctioned?

This is where we are in the 21st century. Everything is ours for the taking. Or so it seems. Social media is certainly “without limits.” You see a photo. You “like” it. You “share” it. There’s no regard for copyright, no reason  — other than a moral one — for attribution to the artist, photographer, or creator. You post it to your “wall,” as millions of others do, and the image is out there, floating in anonymity in cyberspace for all to enjoy — all except for the uncredited photographer who placed their finger on the shutter release and pressed it at exactly the right time to capture the image that everyone is sharing. 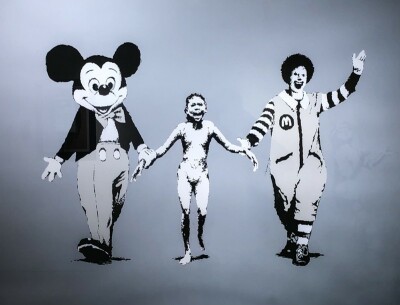 Graffiti, by its very definition —“writing or drawings scribbled, scratched, or sprayed illicitly on a wall or other surface in a public place” — is created without permission. Banksy’s early graffiti work is no different. He did not ask permission to deface walls, if we are to take the view in which many see graffiti. Yet it is through that stratagem that Banksy’s graffiti has become art, with many of his original spray paint and stencil images in urban centers like New York, London, and Paris now protected by plexiglass encasements while others, once seen on old derelict buildings, have been torn down, lost to the ages. It is because of Banksy’s unique, somewhat simplistic approach that his work is immediately identifiable — and his reputation has soared — no matter how many times his work is reposted, unattributed, unlike the many creatives who have lost their work and identity to the realm of virtual reality.


It is with suspended disbelief that “The Art of Banksy: Without Limits” is best enjoyed — and Underground Atlanta is the perfect setting to experience it. The storefronts, buildings, and walls of Underground — Atlanta’s “city beneath the city” built along the original post-Civil War street levels of Pryor and Alabama streets and Ponder’s and Kenny’s alleys — provide backdrops not unlike those throughout the world where Banksy originally spray-painted his way to fame.

The Banksy murals painted inside the exhibition area along Old Alabama Street may not be original Banksys — how could they be? — but they are painstakingly reproduced to have the same dramatic effect of the originals. That’s not to say everything in the exhibit is an imitation of the original. The installation includes 155-plus artwork images, including 23 stenciled murals; dozens of prints on paper, canvas and other materials; limited-edition original Banksy lithographs and canvas works; photos, three miniature and ten life-sized sculptures; video and multimedia installations, in approximately 33,000 square-feet of custom-built exhibition space tailored to Underground. Indeed, Underground Atlanta is as much the star of “The Art of Banksy: Without Limits” as the images in the exhibit.

Banksy is more than a graffiti artist. He doesn’t just spray paint walls and buildings with his tag. He serves a purpose, reappropriating cultural icons, giving them new meaning with his sardonic, sometimes dry, juxtapositions. While his individual works, seen one-by-one over the course of years as they are created, may shock the senses, viewing them together in one space brings the overall thematic elements of his oeuvre into better focus. It’s no accident that many of the works in “The Art of Banksy: Without Limits” are illuminated with spotlights that form hearts around the works, as love —represented in many of his works as a red, heart-shaped balloon — is something we need more of the world over. Yet love can be obscured by harsh reality and unnecessary precepts.

His 2004 “Napalm (Can’t Beat That Feeling),” oil and emulsion on canvas, with Ronald McDonald and Mickey Mouse each holding the hand of the nine-year old old Kim Phuc as she runs down a road naked following a South Vietnamese napalm attack in a 1972 photo, is just such an example. Democracy brings with it the advantages of capitalism, sure to ease your pain and relinquish your fears. 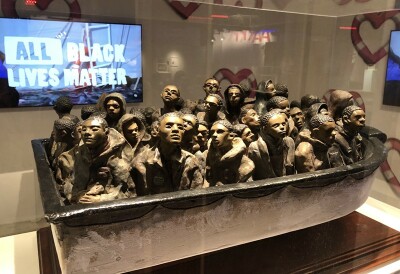 There’s morality at play in Banksy’s works and his messages cannot be ignored. They overwhelm the viewer walking through “The Art of Banksy: Without Limits,” whether the images are real or facsimiles. The three souvenir sculptures from “The Walled Off Hotel,” built along Israeli the separation wall in Bethlehem, illustrate the plight of Palestinians under Israeli control. The cramped life boat packed with Libyan refugees while a video screen projects “All Black Lives Matter” echoes the systemic racism not only in the United States, but in the world as a whole. The installation “Dismaland,” with its “I Am An Imbecile” theme, takes on consumerism, celebrity, and the hold law enforcement has on society.


The exhibition works because Banksy’s messages are not diluted, even if you are viewing replications of his works instead of the real thing. Every nuance of meaning, every sarcastic bit is present, even if the artist is not. The Atlanta exhibit — as well as those in cities from New York to London to Paris to Istanbul to Moscow to Tokyo — has not been authorized by Banksy. In fact, he has rallied against these exhibits on social media, just as he rallies against oppression, consumerism, racism and other ideologies in his artwork. The irony, of course, is that the anonymous artist known only by his nom de guerre never asked authorization when he first started gaining notoriety for his graffiti.

As an observer, I found the “The Art of Banksy: Without Limits” engaging, captivating, and fun. But, as a creative, I have to agree with Banksy. I, too, would condemn anything exploiting for profit works which I created.

On page two, the colophon, of the catalogue “The Art of Banksy Exhibition” — which one may purchase when exiting through the gift shop in Underground Atlanta — it is declared, “Unless otherwise noted, images in this publication are copyrighted. The Art of Banksy Exhibition may not be reproduced without written permission.” Banksy, the creator of all the images in the catalogue — and in the exhibit — does not copyright his work, mainly because he wants the images to be distributed freely, yet all of the images in the catalogue are © İstanbul Müze ve Sergi Yönetimi ve Danışmanlık A. Ş.? Is all that I enjoyed in the two hours spent at “The Art of Banksy: Without Limits” no more than “a cheap holiday in other people’s misery,” as the Situationists declared of one's enjoyment at the expense of another's misfortune? Have these images been hijacked at Banksy's expense? 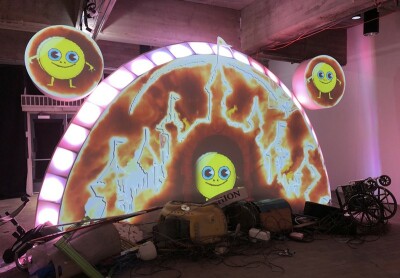 DISMALAND: Images from the 2015 installation are on view. PHOTO CREDIT: TONY PARIS

Or, is Banksy behind it all? Is his public condemnation of these exhibits yet another subversive act, part of a performance art piece of his design on a grand scale, with those of us attending these exhibits unwitting actors in his play? Are such exhibitions a means of Banksy getting his message across to an even greater number of people, while his condemnation of the exhibits for money being made off his works is but another criticism of consumerism?


Among the displays in “The Art of Banksy: Without Limits” there is a wall spray-painted withthe quote, “Nobody ever listened to me until they didn’t know who I was.” Perhaps anonymity is the best way for Banksy to get his point across. —CL—