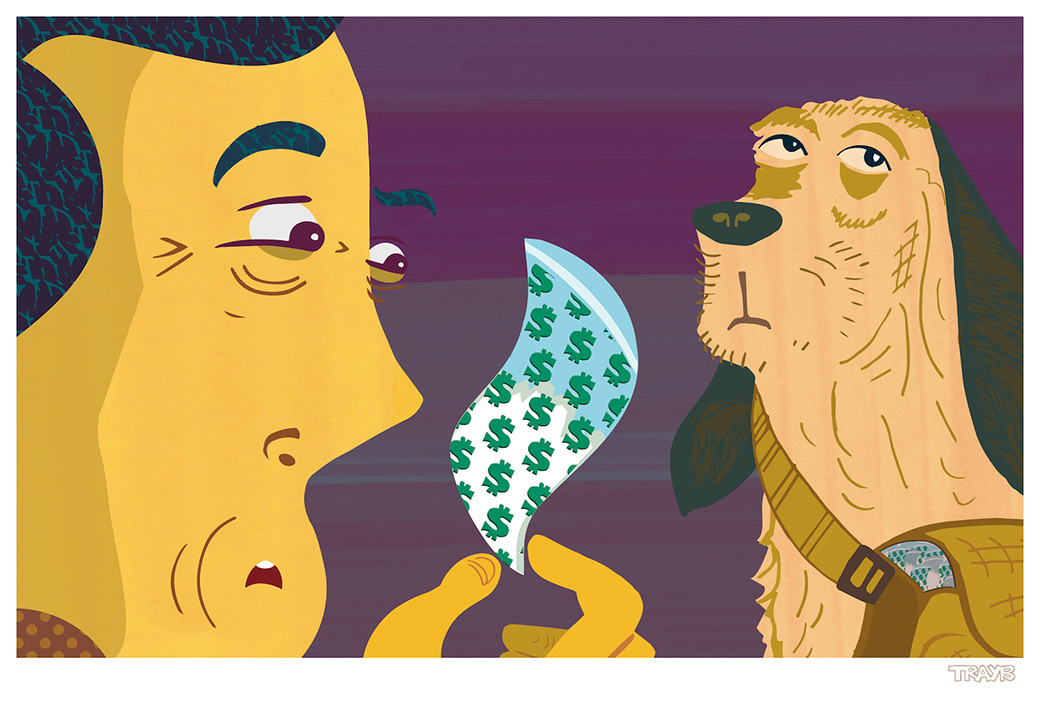 A super-smart dog found a 44-year-old man’s bag of methamphetamines and lottery tickets in Thomas County, Georgia, and now that man is going to prison. No, it’s not a cop dog … rather a smart-as-hell canine.

How it went down? The dog returned home to its owner with a “suspicious, brown satchel,” according to the U.S. Attorney’s Office of the Middle District of Georgia. The dog’s owner opened the satchel, finding 154.78 grams of meth — worth thousands of dollars, according to 11Alive. The satchel also contained some lottery tickets.

Cops traced the lottery tickets to pinpoint the exact store where they’d been purchased. Cops then pulled the store’s surveillance video, leading them to the 44-year-old suspect, who later admitted he’d planned to distribute the meth in his satchel.

Additionally, a woman said the 44-year-old allegedly visited her hotel, punched her in the face, and demanded to know where his special meth satchel was located. It won’t be the 44-year-old’s first time in prison — He’s a frequent flier there, according to authorities.

Vendors ran out of food and drinks. Some musical acts scheduled to perform — just didn’t.

“Many in the crowd started booing when Johnny Gill, who was part of New Edition, came onstage and said he would not be performing,” reported WSB-TV.

Concert-goer Cheryl Silver responded, “They must have said Johnny, we don’t have all your money, but we will give you something if you go out and say hi to the crowd.”

Other fans say musical performances at the festival began two hours late — and bottom-tier acts took up wayyyy too much stage time.

Reggie Nelson told WSB-TV, “This was one of the biggest rip-offs I’ve ever seen … My girlfriend came back from getting her drink — She was like, “Who are all these random acts we’re listening to?”

Concert promoter S.E.M.G. was apologetic on Facebook, stating in part, “For those that left early and expressed understandable frustration, we sincerely apologize that we missed the mark.”

Kick in the pants

A bold Georgia teen is challenging what she calls the “sexist,” “racist,” and “classist” dress code at Cobb County School District.

Within minutes of her first day of eighth grade, Sophia was sent to the principal’s office for violating the dress code, along with 15 other girls. Sophia’s violation? “The rip in her jeans was higher than the tip of her finger when placed next to her thighs,” reports WSB-TV.

Sophia is angry, saying only females were in the principal’s office for dress code violations — thus, sexist.

Sophia says the jeans she was wearing are one of the few pairs that work with her body shape. “It’s very hard for me to find jeans that fit,” she told WSB-TV, noting she has bigger thighs and calves from playing soccer. “I’m not insecure about my body, but someone who wouldn’t be as confident would get really hurt by that mentally.”

Sophia’s petition garnered more than 3,000 signatures — and netted her an appearance on ABC’s Good Morning America.

Her dad, Joe Trevino, firmly supports his daughter’s activism. Also, her father points out the irony in Cobb County School District’s strict dress code compared to its optional mask policy for students during a raging pandemic. “We are asking the district, ‘What is the difference between parents making a choice on masks and also parents having a say on what is appropriate for what kids can wear to school?”

Intown Atlanta neighbors were buzzing on Nextdoor about an alleged police raid on a female psychic’s store on Moreland Avenue. Atlanta police reportedly shut down part of Moreland and Hosea Williams Drive to raid the psychic on the corner.

Apparently, the psychic didn’t see the it coming.

A 36-year-old, Cherokee County man kidnapped his ex-wife while in disguise, leaving her bound with zip ties and a pillowcase over her head on her porch — then pretending to rescue her in a twisted plot to win back her heart.

The 36-year-old man called 911 around 2 a.m. “When deputies arrived, they met him on the front porch of his ex-wife’s home. (The 36-year-old man) told officers that he had just arrived and found his ex-wife tied up on the back deck,” according to the Atlanta Journal-Constitution.

What really happened? The 36-year-old man tried to reconcile with his ex-wife the day before and even faked a cancer diagnosis to try to win her sympathy.

“When that didn’t work, he created a convoluted plan that the investigators in this case and our office truly believe involved a plot to kill her and then himself,” the Cherokee County assistant DA told the AJC. “When he couldn’t go through with that plan, he instead devised a new plan to rescue her.”

The key to his new plan? Wearing a mask and disguising his voice as he kidnapped his ex-wife. He then went home, changed his clothes, returned to his ex-wife’s house, and called 911.

The AJC reports, “Deputies found that (the 36-year-old’s) search history on his phone and laptop included the following queries: How long before you starve to death? How to change the sound of your voice? and How long it takes to choke someone unconscious?”

He was sentenced to 25 years in prison and the following 45 years on probation.

At a hipster lounge on Sweet Auburn, a boyfriend and girlfriend got into a major argument over a Paycheck Protection Program (PPP) loan.

“At some point, the girlfriend’s ex-girlfriend got involved and sent over her family members to try to get money from the boyfriend,” reported 11Alive.

“The girlfriend used to date another girl, and that girl sent her brothers over here to talk about the PPP loan and try to get their money back,” Atlanta cops said.

The ex-girlfriend’s brother allegedly shot the boyfriend in the arm during the pandemic loan dispute. The boyfriend went to Grady Hospital and is in stable condition.

No suspects had been arrested by the time of writing.

But police say there’s surveillance video of the fight and shooting outside the Auburn Avenue lounge, and cops are actively pursuing suspects.

Tiny upside — Everyone involved in the pandemic-loan argument and resulting gunfire was properly masked. —CL—