ON TAP: Candy and beer to go round 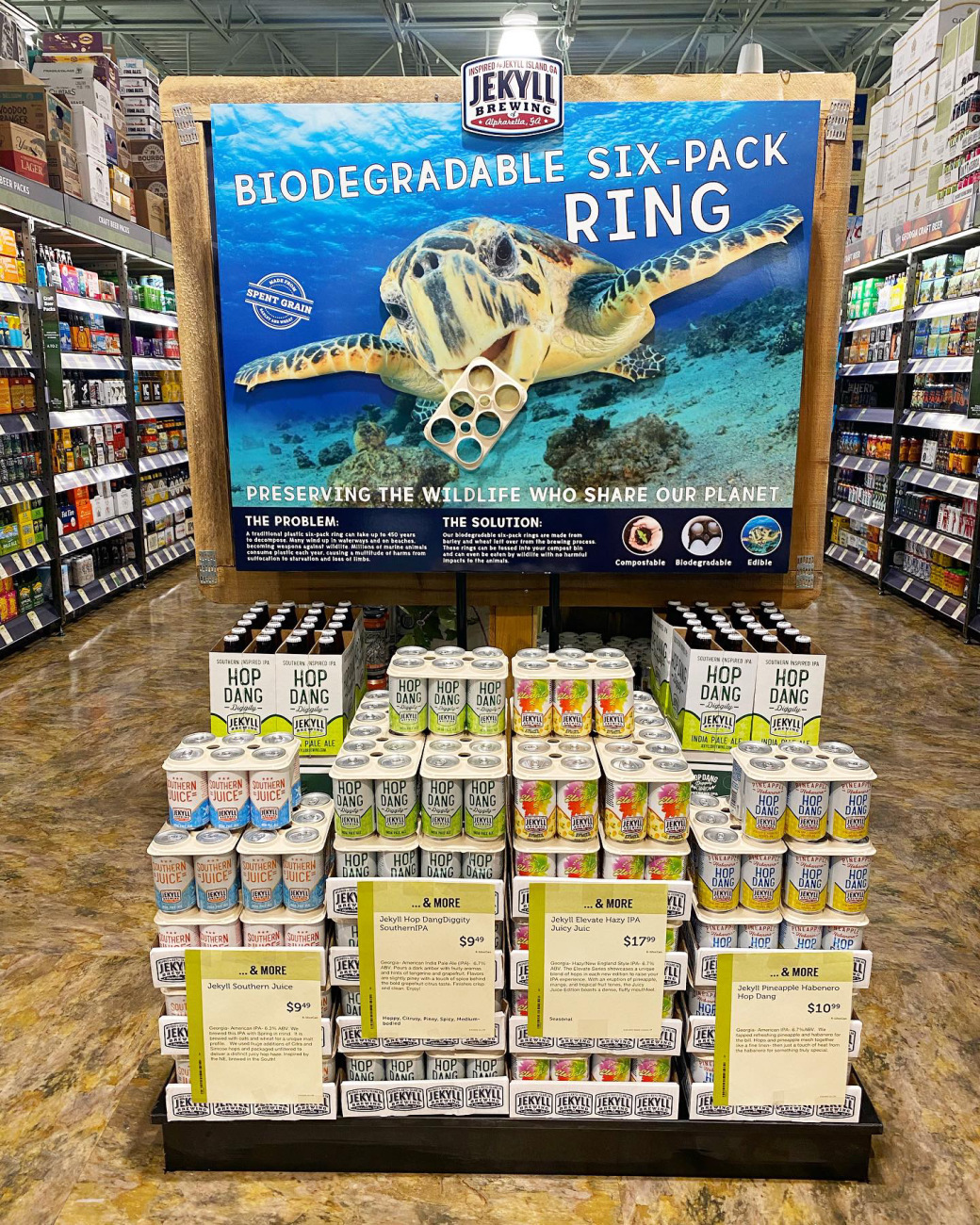 Next time you pick up a six-pack of beer from Jekyll Brewing in Alpharetta, check out their new biodegradable six-pack rings for cans.

It’s no wonder that the turtle in the display at Total Wine in Alpharetta has the rings in its mouth — they are made from the barley and wheat left over from the brewing process.

Camilla Kesterson, at Signs of Intelligence, designed the display, along with Maria Ponce de Leon and others at the Peachtree Corners custom signs and graphics business.

Enjoy a great brew and help save sea creatures at the same time!

Finally opening at the end of the month is Castleberry Hill’s Atlantucky Brewing, a brewery owned and run by the band Nappy Roots.  They’ve been brewing for awhile, and have collaborated with Monday Night Brewing, Arches Brewing, Full Circle, and ATG, and now they’ve got their own joint!

StillFire Brewing in Suwanee brings home yet ANOTHER medal, this time a Bronze from the Great American Beer Festival for their Kilt Chamberlain Scotch Ale, a 9.5% ABV brew that features a mix of caramel, dark fruit, nuts, chocolate and a tiny bit of peat smoke. Check out our StillFire podcast!

Monday Night Brewing’s beloved Stranger Danger, an Imperial Milk Stout (aged in bourbon barrels and conditioned with a mountain of peanut butter cups) that was voted Beer Connoisseur’s #3 Best Overall Beer in the US in 2019 is back for a limited time.  Get it at their West Midtown or West End locations, or in limited release across Georgia. Check out our Monday Night podcast!

Red’s Beer Garden is featuring Beer and Candy pairings October 19-31. Enjoy selected beers and receive a free bag of candy.  They’ll also be celebrating Halloween onFriday, October 29, with a tap takeover, pumpkin carvings and a spooky movie on the lawn at 8 p.m.  Also, if you wear a costume when you come by on Halloween, they’ll pour you a free draft lager!

Head over to Ansley Park’s Orpheus Brewing for Barrel of Laughs—a night of stand up comedy—from 8-9:30 p.m. on October 27.  While you’re there, check out their renovated taproom!  They’ve upgraded their bar, added new tables with more comfortable seating, and completely redid the Barrel Room space. Check out our Orpheus podcast!

The Boos and Brews Halloween Festival takes place this year at Atlantic Station on Saturday, Oct. 30 from 1-5 p.m. Tickets include entry, entertainment, souvenir cup and alcohol samples.  Details and tickets available at atlantabeerfestivals.com.

Head down to Peachtree City for Line Creek Brewing’s Boos in the Bubble on Saturday, October 30 from 8-11 p.m.  They’ll have a Halloween Costume Party, a food truck, and DJ House Ninja will be keeping it moving. Check out our Line Creek podcast!

Join author Jeff Alworth along with brewmaster Mitch Steele at New Realm Brewing in Old Fourth Ward on November 1 at 6 p.m.  for a lively discussion about Alworth’s new book The Beer Bible.  A Q&A and book-signing will follow the conversation. This is free for the public!

Marietta’s Red Hare Brewing and Glover Park Brewery are teaming up to support the annual Root House Beer Festival on November 13.  Each year, the festival works with local breweries to create a collection of beers crafted with hops, fruit and herbs harvested from the historic gardens at the William Root House in Marietta. Check out our Red Hare and Glover Park podcasts!

Head to Marietta’s Ironmonger Brewing on November 13 for their Glow Throw Anniversary  Party and get your axe throwing on!  Pre-register here, then email your info to them to reserve a glow lane! Check out our Ironmonger podcast!

Head up to Lawrenceville’s Ironshield Brewing Saturday, November 20 for their Chili Cook-Off for Charity.  All ticket sales will be donated to Beyond the Ribbon, an organization who advocates for support and resources beyond the diagnosis of cancer.   In addition to their beers and the chili, they’ll also have live music and an art show! Check out our Ironshield podcast! —CL—