Give thanks for making it through another pandemic year 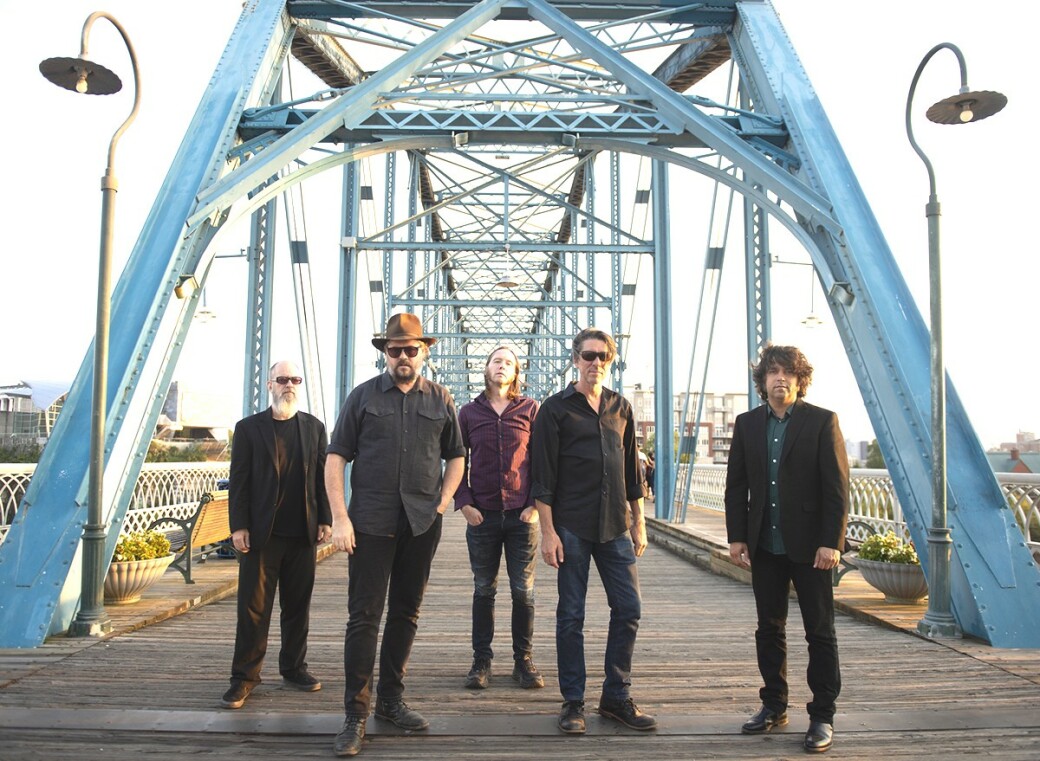 Photo credit: Andy Tennille
STANDING TALL: Drive-By Truckers are back on the road after the year and a half pandemic lockdown, just in time to celebrate the band’s 25th anniversary. Welcome them back at the Variety Playhouse Friday and Saturday, Nov. 11 and 12.
By HAL HOROWITZ Monday November 1, 2021 04:40 AM EDT

Shakey Graves, The Eastern — Known to his mom as Alejandro Rose-Garcia, Texas musician Graves has somewhat amazingly carved out a successful career with a stripped down, emotionally laced, indie folk-blues hybrid. He has since moved closer to the mainstream with a fuller band sound, albeit one that maintains his dark, rootsy core.

The Mavericks, Variety Playhouse — The subtitle of this Maverick show is “En Espanol,” which is also the title of their most recent album, and as you’d expect, the songs are all sung in Spanish. That’s not a huge departure for the multi-hyphenated genres the band has explored since its 1991 debut, except that they stick to a Latin style here instead of their usual mélange of Americana. Regardless, their live show is always a blast because music is the universal language.

Chris Smither, Eddie’s Attic — Veteran folk-bluesmen don’t get any more authentic than this Bonnie Raitt approved singer-songwriter. The dusky voiced Smither celebrated his 50th year in music back in 2014 and shows no sign of slowing down anytime soon. His 2018 Call Me Lucky release featured bittersweet versions of songs originally done by The Beatles and Chuck Berry with a fine batch of new originals.

Crystal Bowersox, City Winery — This husky- and whiskey-voiced, 2009 American Idol runner-up has outlasted many of those whose careers fizzled after they made it to the show’s top spot. That’s because there is nothing artificial about her leather-tough attitude and ability to tap into the Southern soul-grit that made Joplin and Delaney & Bonnie roots-rock icons.

Lera Lynn, Eddie’s Attic — Nashville-based singer-songwriter Lynn lives in a more noir-oriented space than many of her peers from that city. She first came to national attention through her brief but noteworthy appearances on the second season of True Detective. But her recent introspective release, On My Own, displays her talents as a solo artist, recording it without the assistance of others and showing musical abilities that expand farther than many others in her genre.

The Rolling Stones, Mercedes-Benz Stadium — They can’t last forever — as Mick’s heart issues and, of course, the recent passing of drummer Charlie Watts make clear. Reports from this tour say they still bring it in concert, even if the set list is somewhat predictable, and they seem to actually live up to the “greatest rock ’n’ roll band in the world” hype. Nonetheless, you never know when it will be last call.

Ashley McBryde, The Eastern — This multiple GRAMMY-nominated roots-singer mixes emotional rock ’n’ roll with country for a high octane, swaggering sound that pays tribute to classic C & W but adds just enough bluster to make it dangerous. Her ballad hit, “Little Dive Bar in Dahlonega,” about that Georgia burg’s Crimson Moon joint will clearly generate the most response, but she’s a road-hardened, tough cookie and has a lot more great stuff where that came from.

Drive-By Truckers with Buffalo Nichols, Variety Playhouse — Kudos to Athens’s hard-working Drive-By Truckers for playing two nights at a smaller venue rather than one night at a larger one. The band’s Atlanta roots are deep and go back to slinging out their country-tinged, politically and socially charged Southern rock at the Star Bar. It should be old home week for them and their longtime local fans. Arrive early for solo bluesman Buffalo Nichols whose debut is starting to get attention from those looking for that real deal deep Delta sound.

Atlanta Blues Society monthly meeting, The Green Room, Mableton — This month’s funky blues music is courtesy of the Hughes Taylor Band, veterans of the local scene. Catch up with old blues-loving friends and meet new ones as the Atlanta Blues Society updates you on upcoming events. And players, don’t forget to bring your gear for the jam that famously closes each meeting.

Keb’ Mo’ with The Brother Brothers, City Winery — Folk bluesman Mo’ got his start in the ’70s backing Jefferson Airplane fiddle player, Papa John Creach. Since then, his 1994 solo debut has garnered a handful of awards and accorded him star status in the blues-Americana genre. His smooth voice and easygoing vibe aren’t exactly raw or rootsy, but he has been responsible for exposing the blues to a well-heeled audience that may never have listened to it otherwise.

Drivin’ N’ Cryin’, City Winery — The Kevn Kinney-led quartet may have gone through more members than Fleetwood Mac over the decades, but the band continues to bring their Southern rocking with the same energy as when they were playing clubs in the early ’80s. They usually play larger venues, so this is a great way to get up close and personal with some Atlanta rock royalty who keep on keeping on and never phone it in. They remain “scarred but smarter,” as their 1986 debut was titled, and all the better for it.

The Wallflowers, Variety Playhouse — Jakob Dylan returns with an all-new Wallflowers band, promoting 2020’s lackluster Exit Wounds, the first album under the Wallflowers name in nearly a decade. Of course, they’ll play the old FM radio hits, like “One Headlight,” since few have heard their new songs. But if this Dylan’s past front man performances, which ranged from lifeless to barely engaged, are any indication, this could be a snoozy night.

Katie Pruitt, Eddie’s Attic and The EARL — This is a homecoming of sorts for introspective and soulful singer-songwriter Pruitt who grew up in the Atlanta suburbs. Her 2020 Rounder label debut was well received critically and commercially, putting her well on her way to a career of bigger and better things. She’s playing two different clubs on successive nights, with wildly different clientele, one of the few to do that. Catch her now before she graduates to larger places.

John Hiatt, the Jerry Douglas Band, City Winery — Two headlining legends together make for a can’t miss combination. Singer/songwriter Hiatt and eclectic Dobro master Douglas will play the bulk of their recent duo release but of course will include older rearranged music from their extensive careers too.

Atlanta Mega Blues Festival, Fox Theatre — It’s an old school night of slick soul-blues with a handful of heritage acts led by the iconic Latimore (“Let’s Straighten It Out”) and Sir Charles Jones. As blues goes though, this is more along the sultry, slow groove, quiet storm and funk-lite sound that reached its peak in the mid-to-late ’70s, rather than anything you’d find on Chess Records. With six acts, it should be a fun night of retro music that has a big enough audience to fill the Fox.

Ruby Velle & the Soulphonics, City Winery — Local retro-Southern, soul diva Velle and her large Soulphonics outfit have graduated to bigger, classier rooms, and rightfully so after years of scuffling. It has been four years since we’ve heard new music so expect some fresh tunes mixed with the righteous, horn-laced R & B that these veterans have been perfecting over the past ten years.

Sierra Ferrell, The EARL — With her mix of Western Swing, folk-country, and backwoods bluegrass, Nashville’s Ferrell has released one of the most charming and idiosyncratic debuts of the year. This might seem an odd venue for this rootsy mélange, but Ferrell approaches her old-timey music with a punk attitude and a free-spirited freshness.

Delta Rae, Terminal West — Delta Rae is not a person’s name, but rather a band featuring brother-sister harmonies. The front three singers dig into the edgier tones of Southern folk with alternatively chilling and uplifting results. The music is sometimes ominous, laced with portentous gospel and strains of blues and pop. They will feature music from the recent The Dark and The Light releases, both appropriately named reflections of their sound.

Jeff Parker and Steve Gunn, Terminal West — Guitarist Gunn has been downplaying his electric six-string skills in favor of lovely, slightly off-kilter but sweet melodies played on acoustic and sung with his increasingly confident vocals. This stripped-down gig will showcase that style from his recent Other You album. Parker’s more experimental work — he used to be in the band Tortoise — makes a terrific double bill, and the concept of both sharing the stage for some songs should be enough to entice every serious local guitarist to check this out.

Please send information on upcoming events to be considered for Creative Loafing’s Blues & Beyond concert calendar to hal.horowitz at creativeloafing.com.