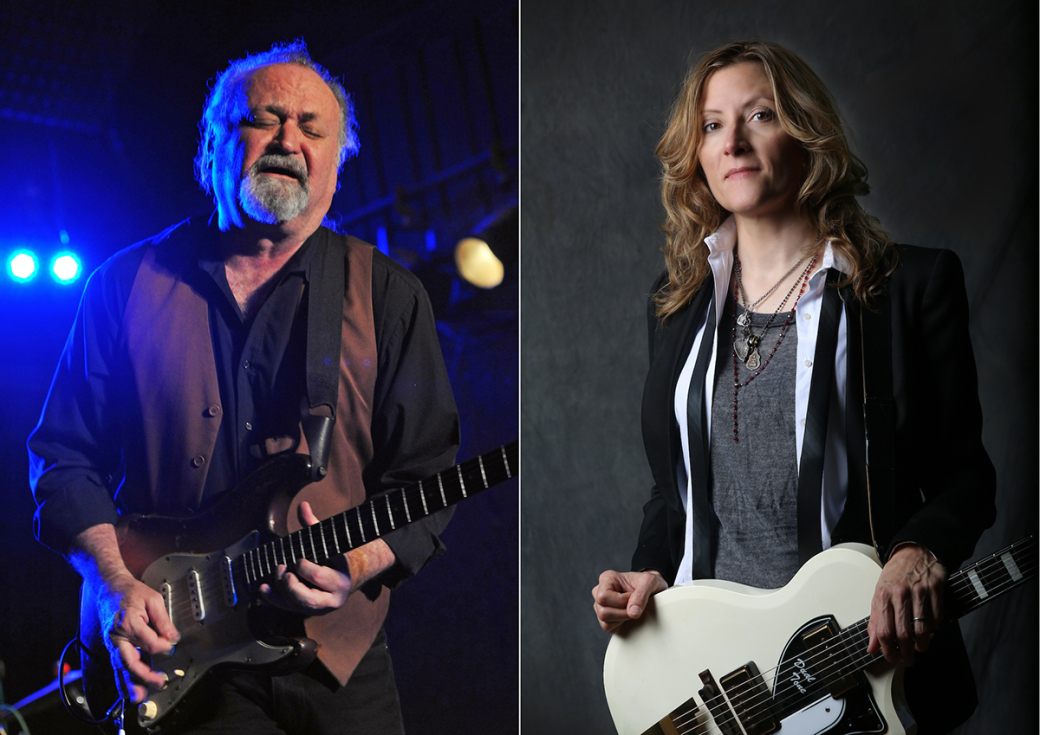 While we are a month in to the New Year, it has been a rocky start. The Omicron variant put the brakes on live show momentum, specifically with the cancelation/rescheduling of major concerts, including the Indigo Girls’ two night stand with the Atlanta Symphony Orchestra New Year’s Eve (moved to the same dates in 2022) and Widespread Panic’s four night Fox Theatre stand (pushed to August, 2022).

Nonetheless, it looks like it will take more than a pandemic to stop two of the city’s high profile roots acts from doing their life’s work recording music and  — hopefully — touring behind it. Longtime Atlanta favorites Tinsley Ellis and Michelle Malone both have new discs rolling out.

Ellis just released Devil May Care, his 20th recording, the end of January, and kicked off his first major tour since early 2020 at Atlanta’s City Winery. The 10 tracks, co-produced by the blues rocking guitar trouper and longtime cohort/keyboardist Kevin McKendree, stay the course for the rugged Southern-styled rock he is known for. A small horn section appears on three tunes bringing extra soul to the proceedings.

Malone recently sent out emails teasing two forthcoming CDs, both due out Spring 2022 — a new album of originals titled 1977 (the year she started playing guitar) and Fan Favorites Unplugged Vol. 2. Both can be ordered in advance on her website www.michellemalone.com and will be covered in this column later this year.

In September of 2021, Diane Durrett put out her first fresh music in a while. Co-credited to her longtime Soul Suga outfit, the self-produced and engineered Put a Lid on It EP finds the singer/guitarist in full R&B diva mode. Her sumptuous blue-eyed soul, gospel influenced vocals enliven eight terrific, radio friendly tunes that reference her blues roots, pushing them toward frisky, rootsy pop.

Show some Valentine’s Day love by supporting these Blues & Beyond February events.

Rebecca Loebe, Eddie’s Attic — Raised in Atlanta, the Berklee College of Music graduate has since relocated to Austin, TX, most recently working with peers Grace Pettis and Betty Soo in the well regarded Nobody’s Girl outfit. She returns to her old stomping grounds for a solo show which will likely feature some NG material, as well as songs from 2019’s folk/pop gem Give up Your Ghosts

Drew & Ellie Holcomb, Symphony Hall — What better way to spend Valentine’s Day than with this married musical twosome? Drew is well known for his Neighbors band and wife Ellie made her name in the Christian music community. Together their sympathetic voices and cushy soft folk/rock combine for a synergetic, and sure, romantic combination intended to get couples in the crowd warmed up for some post-show fireworks.

The Staves, Terminal West — These three UK based sisters harmonize like, well, sisters, combining folksy influences with pop that’s more brooding than fizzy. That’s especially the case on their new Good Woman disc, a somber and pensive yet tuneful set imbued with melancholy due in part to the death of their mother. They’re talented enough to have caught the ear of Paul Weller, who featured them on his recent album, and First Aid Kit, another band of sisters they opened for. They’re on their way to bigger things.

Randall Bramblett Band, Red Clay Theater — Multi-instrumentalist and potent singer/songwriter Bramblett has never attained the popularity he deserves, starting with his work in Sea Level and continuing through a batch of terrific solo albums, each better than the last. Pine Needle Fire, his latest from 2020, is another highlight in a catalog filled with them. And even though he plays here often, he always impresses with how deep his talent as a soulful, introspective Southern rocker runs. This intimate venue is one of his favorite places and a perfect one to appreciate highlights from a lifetime of extraordinary work.

The Punch Brothers, Tabernacle — Even if virtuoso mandolinist Chris Thile (ex-Nickel Creek) wasn’t hosting the weekly PBS show,Live From Here , this would be a wildly popular concert. His Punch Brothers band has been a top bluegrass act since their 2008 debut, and has only increased in popularity since, making them one of the most critically and commercially successful acts in that genre.  Their new Hell on Church Street collection was released last month; expect plenty of new songs mixed with highlights from the group’s previous five albums.

Supersuckers/Jesse Dayton, The Masquerade — Both are headliners, so this combination of the veteran Eddie Spaghetti fronted Supersuckers’ tough punk/garage country and the multi-talented Dayton’s (musician, DJ, recent author) raw, roots music is a natural pairing of like-minded gruff Americana troupers.  A closing rave-up with both on stage tearing it up is likely, but either act is well worth the admission price on its own.

Tower of Power, Variety Playhouse — Of course the members have changed over the decades (few could name the many lead singers who have joined and left their ranks), but the iconic San Francisco horn funk/soul band has already passed the 50th anniversary mark and shows no signs of slowing down. You’ll get timeless classics like “What Is Hip?” and “Knock Yourself Out” but even the less popular material connects live when co-founder/baritone sax player Doc Kupka gets to dancing. No one leaves without a goofy smile plastered on their face, reason enough to see these guys before they call it a day.

Elle King, Variety Playhouse — King may be considered the Chrissie Hynde of country rockers; a rugged, no-nonsense singer/songwriter grinding out punchy, unfiltered, gutsy rock and twang, heavy on the former but with just enough of the latter to keep her within spitting distance of the Americana genre. She’s a “Baby Outlaw” as one of her song titles suggests, but with only two albums of material, and nothing new in the past three years, it’ll be interesting to see if she can stay the course and remain as rough, tough and bone-rattling as she has been so far.

Brent Cobb/Gabe Lee, City Winery — Georgia born and raised Americana singer/songwriter Cobb comes home with a tour named When It’s My Time after a track on his new gospel release And Now, Let’s Turn the Page…. The songs emerged from a July 2020 near death car accident. He learned many of them in the church of his Ellaville turf so this date brings him full circle, although some of his arrangements rock way harder than you’d expect. Arrive early for Lee who wowed the crowd with a stripped down set on a recent opening slot for Jason Isbell.

Brett Dennen, Variety Playhouse — The fresh faced, gangly (six-foot, five) Dennen’s folk/pop is as sunny and upbeat as his California home state’s usually temperate weather. An earnest singer/songwriter with an amiable voice, Dennen writes catchy, yet organic soft rock tunes. He has been cranking out albums since 2005 in a low key Tom Petty way, albeit without Petty’s rock and roll bona fides. He’s accrued a significant following over the years, Dennen doing it the old fashioned way, hitting the road, playing for whoever will listen, and being fortunate enough to compose music affable enough to be used in network television shows.

Greensky Bluegrass/Infamous Stringdusters, Tabernacle — It’s a bluegrass lover’s dream as two of the top purveyors of the genre combine for a show guaranteed to please anyone who follows this music. Both have pushed the boundaries of this traditional mountain sound, but maintain strong connections to its roots. They have plenty of miles under them, with Greensky’s debut arriving in 2004 and the Stringdusters’ appearing in 2007, and a closing jam is likely, which should be a rollicking string picker’s hoedown.

Neal Francis, Terminal West — Blue-eyed soulster Francis started his career backing up blues players, but quickly shifted his to a more classic R&B approach. His 2019 debut made a substantial splash, followed by a more slickly produced 2021 release, In Plain Sight, which added some Southern rock influences. He is part of a popular retro soul revival, similar to other acts like Aaron Frazer, Kelly Finnigan and Eli “Paperboy” Reed. Francis records for the Karma Chief label which, along with Daptone, has successfully brought this retro styled music to contemporary audiences.

Al Stewart, City Winery — Everyone knows “Year of the Cat” and “Time Passages” from his mid-70’s heyday, but Brit folk-rocker Stewart, who tours with his Empty Pockets band, has never stopped releasing albums on a semi-regular schedule through the early ‘00s, many with a historical bent. He is pushing 80 but his voice hasn’t aged a day. The band will rock out more than you’d expect and the less popular new music is nearly as enticing as those old hits.
$45-60. 8:00 p.m. City Winery, 650 North Ave. NE., Atlanta, 30308. citywinery.com/Atlanta

St. Paul & the Broken Bones, The Eastern — The Paul Janeway fronted Alabama eight piece has gradually shifted away from the Staxstyled soul that got them noticed. On the just released The Alien Coast they completely remove the horns to focus on a heavy psychedelic, spacey approach heavy on reverb guitars and synthesizers, yet still somewhat gospel influenced. It’s a radical move, one which may attract new fans while losing some old ones, but shows a willingness to keep their sound fresh and not get pigeonholed. How this will translate to the stage is yet to be seen. It won’t be boring.

Marc Broussard/Jamie McLean, Variety Playhouse — Soul man Broussard hasn’t released an album of original material in four years, but his booming voice and tight band have been knocking out audiences with a combination of his own songs and a healthy dose of covers. They are delivered with a smoky, easy rocking swampy vibe that goes down smooth, but with an edgy after bite. Maybe he’ll introduce some new songs, but, even if he doesn’t his impressive catalog ensures a moving and emotional performance.

Please check with the respective venues hosting events listed to ensure that they are, indeed, still occurring, and to get their latest updates on any health and safety precautions before purchasing a ticket, making a reservation, or heading out for the evening. All information subject to change. —CL—