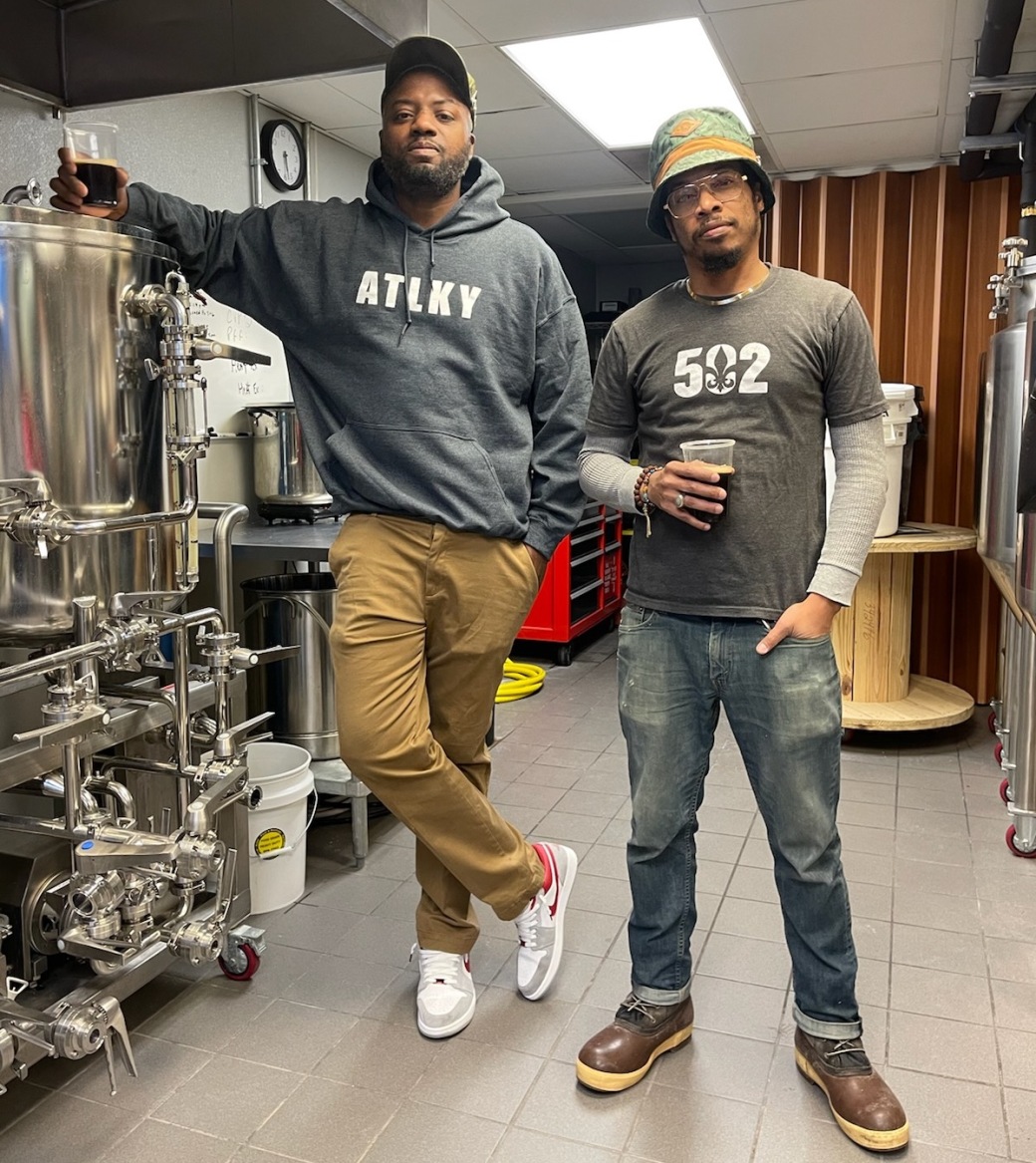 Atlantucky Brewing, in Castleberry Hill, opened to the public Friday, Feb. 4, after a soft-opening for media and friends Jan. 28. Owned by members of Nappy Roots — best known for hit singles like "Po' Folks,” “Awnaw," "Roun' The Globe,” and "Good Day” — the tap room, brewery, and events space near Mercedes Benz Stadium is located in former loft space at the Intown Loft Apartment complex on Northside Drive.

Currently, Atlantucky  has four beers on tap — a sweet stout, an IPA, a pale ale and a Hefeweizen — with more to come. Scales and Skinny agree they are “glad Atlantucky is finally open, so people can taste what they’ve been tasting for years.”

If you know your hip-hop history, you know the group members have history in Atlanta and Kentucky, hence the name, as they pay tribute to their past and move forward.

The Feb. 4 opening — a long-time coming — was scheduled to coincide with Black History month. Check out our Atlantucky Brewing podcast!

Wild Heaven Beer and The Giving Kitchen have come together to create a special, purpose-driven collaboration, “Full-Service Beer.” This IPA is not only a well-crafted beer, but proceeds from Full Service Beer will be given to The Giving Kitchen to aid in their mission of providing assistance to food service workers. You can find it in their taprooms in Avondale and the West End, and in stores. Check out our Wild Heaven podcast!

Check out the latest brewery to open in Sandy Springs, Mutation Brewing, on Roswell Rd. To celebrate their grand opening, they are brewing a really unique sour called Mile High Salute, inspired by the traditional Peruvian beverage Chicha Morada. This sour is made with purple corn, cloves and cinnamon, then fermented with pineapple and apple.

Wild Leap Brewing in LaGrange won Beer Connoisseur magazine’s 2021 Brewery of the Year title! They had three beers to receive World Class ratings (96 or above) and nine more that received an Exceptional rating. The magazine says such a feat by one brewery is an unprecedented achievement. If you haven’t made the hour to hour and a half drive south to LaGrange, you should! Or, you can wait until Wild Leap opens an Atlanta location later this year! But, why do that? Life is short. Beer is good!  Check out our Wild Leap Brew Co podcast!

The Westside’s Fire Maker Brewing Company was ranked the number two Best New Brewery in America for 2021 by USA Today! To celebrate, they are releasing a collaboration brew with the #9 Best New Brewery, Corporate Ladder Brewing, called A Song of Ladders and Fire. It’s a Baltic Porter with a lighter body and notes of chocolate and coffee and hit stores on Feb. 4. Check out our Fire Maker Brewing podcast!

A release party for Skip’s Berliner Weisse will be held Thursday, Feb. 10, from 5-9 p.m.at Tucker Brewing Company. They’ll be doing growler giveaways every hour on the hour. Check out our Tucker Brewing podcast!

Wild Heaven Brewing in the West End is celebrating Galentine’s Day Friday, Feb. 11, for “gals” to partake of a flower crown-making class, a tarot card reading, and a themed photo booth! Attendees get to be the first to try Wild Heaven’s Galentine’s Day Cherry Hibiscus Sour Ale! The Avondale location will celebrate on Saturday, Feb. 12. Tickets are $39 each, and include all the crown-making supplies you need plus drink tickets! And for an additional $10, you can indulge on food from Nana G’s Chicken & Waffles food truck. Check out our Wild Heaven podcast!

Hapeville’s Arches Brewing is holding “HaHa Hapeville” night on Friday, Feb. 18, from 8-10 p.m. featuring some of Atlanta’s best stand-up acts and beer delivered to your table. Check out our Arches Brewing podcast!

Scofflaw Brewing’s second location, Dr. Scofflaw at The Works, on the West Side’s Chattahoochee Row, is having their annual F*** Cancer event to help raise funds for the Leukemia and Lymphoma Society to fight cancer, Saturday, Feb. 19, starting at noon.

Sweetwater Brewing celebrates their 25thanniversary Saturday, Feb. 19. Everything gets going at at 2 p.m. with Futurebirds, Larkin Poe, Andy Frasco & the U.N., and Yam Yam. Plenty of food will be available, and, of course, a boatload of beers! VIP tickets are available, but selling fast..

Two weeks later, Saturday, Mar. 19, mark your calendar for the Suwanee American Craft Beer Fest, as it returns to Town Center Park to reclaim its title as the biggest St. Patrick’s Day weekend party in Gwinnett!. The event is 21and over only, with advance tickets at $55 each onsite now. The price increases to $60 Feb 13. General Admission includes unlimited samples of 350+ craft beers, live music from Journey tribute band DEPARTURE, festival games such as cornhole, giant Jenga, giant beer pong, and mobile axe throwing, food trucks, local artists and vendors. The Georgia Beer Garden will also return, featuring some of our favorite homegrown Peach State breweries.

Then get ready for Steady Hand Beer Company’s Crawfish for a Cause celebration on Saturday, Apr. 2, from 3-11 p.m. Head to Ellsworth Industrial Blvd. on the Westside for crawfish, live music, and, of course, beer to raise awareness of teen and young adult mental health issues, with proceeds funneled to local programs

Looking further into 2022, Sweetwater Brewing and Happy Ending Productions have added Gov’t Mule and Thievery Corporation to this year’s Sweetwater 420 Festival lineup. It’s happening in Centennial Olympic Park Apr. 28 through May 1! While many of the VIP packages have sold out, single day and three-day general admission tickets are still available.

Reformation Brewery has trivia at their Smyrna location (6255 Riverview Rd) on Sundays from 6-8 p.m.