‘Cultural Adventures of a Fledgling Scribe’ exhibit and reading at 378 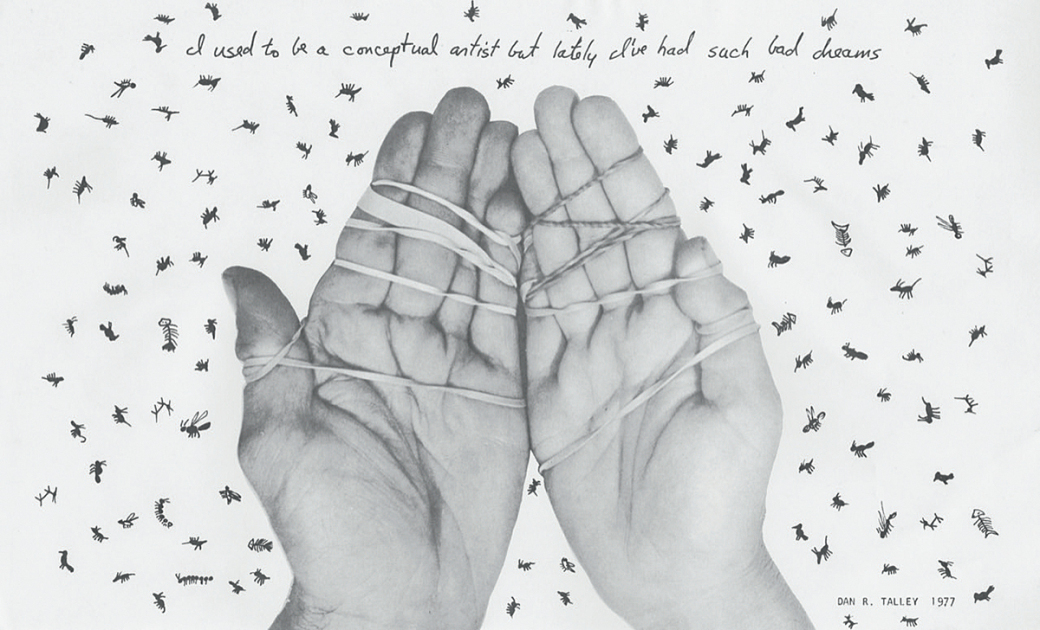 Photo credit: DAN R. TALLEY
NEW LAMPS FOR OLD: ‘I used to be a conceptual artist but lately I’ve had such bad dreams,’ Dan. R. Talley, 1977, is one of the works featured at 378 Gallery in Candler Park, in an exhibition organized by Tom Patterson whose recently published memoir, ‘The Tom Patterson Years: Cultural Adventures of a Fledgling Scribe,’ recounts the author’s time in Atlanta between 1977 and 1984.
By DOUG DELOACH Monday February 28, 2022 06:24 PM EST

By now most readers will be aware of the return of book banning and burning to the national headlines. From Texas and Missouri to McMinn County, Tennessee, and Forsyth County, Georgia, grandstanding arch-conservative Christianist legislators, like-minded local school boards and evangelical whackos are hellbent on keeping certain books out of the hands of their younguns, lest their insufficiently indoctrinated minds become tainted by unholy knowledge — and screw the U.S. Constitution or anything else that dares thwart their sanctimonious crusade.

To mark the occasion, Listening Post draws attention to a book loaded with local content, in the hope that it, too, will be banned for some reason, somewhere, by some imbecile, thereby ensuring a spike in sales.

During his seven-decade stint on planet Earth, legendary Atlanta musician Bruce Hampton touched many lives in remarkable ways. One such life belongs to Tom Patterson, whose memoir, The Tom Patterson Years: Cultural Adventures of a Fledgling Scribe, was inspired by a comment made by Hampton during a dinner party in the late 1970s.

In 1977, Patterson found himself unemployed and itching to escape the stifling confines of Dublin, Georgia, his hometown. The path of least resistance led to Atlanta. “I arrived in the city in my rattletrap Karmann Ghia — a greenhorn writer looking to make something happen,” he recounts in the first installment of a planned trilogy of books published by H’d’ng Press.

It didn’t take long for Patterson to immerse himself in Atlanta’s roiling cultural milieu in which things were moving along a progressive, subversive trajectory, guided by hard lessons learned during the Sixties and Seventies and soon-to-be galvanized by Ronald Reagan’s victory over Jimmy Carter in the 1980 Presidential election. Months before, when Patterson was visiting Pasaquan, the phantasmagorical seven-acre art environment near Buena Vista created by Eddie Owens Martin, the self-taught artist known as St. EOM foretold the Republican triumph. “Reagan has just what this country wants,” he remarked to the author of his biography. “A good head o’ hair and a mean line o’ talk."

Such anecdotes abound in Patterson’s memoir. For Atlantans of a certain vintage, the “Tom Patterson years” (1977 to 1984) mark a golden era when Midtown was developing into a bona fide, southern fried bohemian enclave in the heart of the region’s most prosperous and enlightened city. Patterson’s residences during this period, on St. Charles Avenue and, later, 13th Street, were ideally located within either walking distance or a short drive to the Woodruff Center, High Museum of Art and Atlanta College of Art; hip bars and restaurants, such as the Stein Club, Cha-Gio and the Majestic; music venues including 688, TV Dinner, and the Agora Ballroom where Patterson saw The B-52’s, R.E.M., Now Explosion, RuPaul, and Swimming Pool Qs; and arts-oriented enterprises including Nexus Press, IMAGE Film and Video Center and Art Papers to which Patterson contributed gallery exhibition and installation reviews, feature stories and profiles.

Naturally, Patterson cavorted with movers and shakers in the field, artists, writers and poets, such as Bob Tauber, Mark Smith, Stan Sharshall, Charles “Chip” Wrenn, Fred Brown (publisher/editor of Brown’s Guide), Jonathan Williams (founder of The Jargon Society), and Laura Lieberman and Dan Talley (co-founders of Art Papers). He briefly worked for Judith Alexander whose Buckhead art gallery was among the first in America to showcase vernacular artists, in particular Nellie Mae Rowe.

First-hand encounters with such accomplished and eccentric folks, woven together with Patterson’s personal story, make for an engaging, informative, 200-page read.

“This isn’t intended to be a comprehensive overview of art in Atlanta circa 1980,” Patterson notes. “These are simply some of the artists I knew personally and whose work I have followed with interest. It’s an invitational, not a curated show. I left it up to the artists to choose the works they will be exhibiting.”

Patterson, who now resides in North Carolina, will attend the opening reception of “New Lamps for Old” on Friday, March 4, from 6-9 p.m. at the gallery in Candler Park, behind Flying Biscuit Cafe. On Saturday, March 19, 4-6 p.m., Patterson returns to 378 for a book signing event, which will include a reading by the author beginning around 4:30 p.m. —CL—