Rock and classical music come together at Symphony Hall 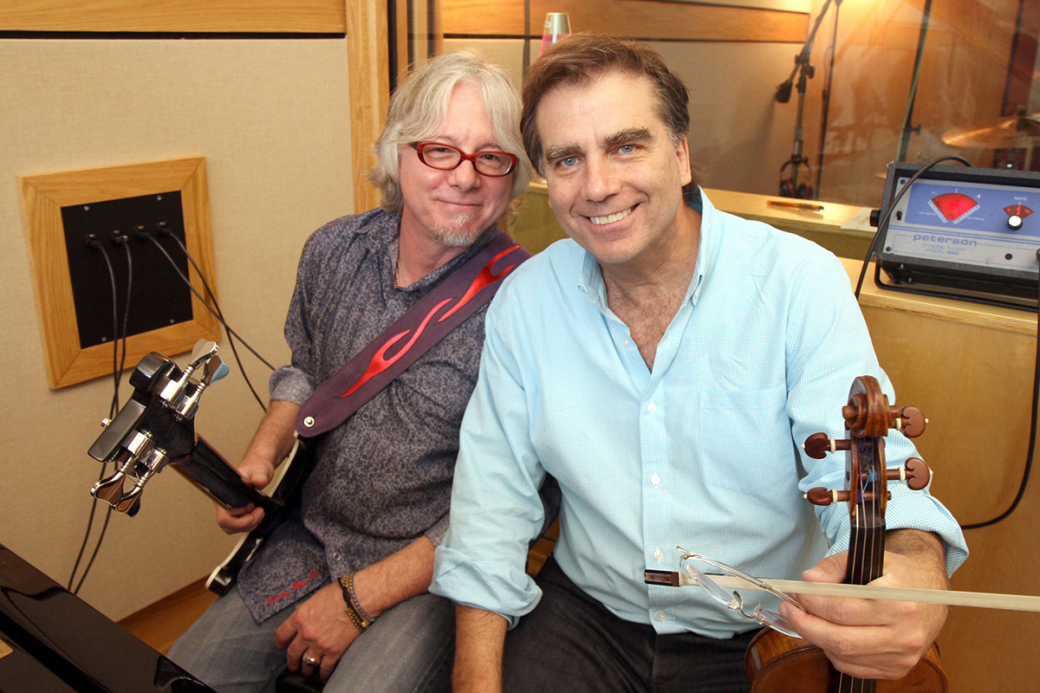 Childhood pals Mike Mills and Robert McDuffie, who grew up together in ‘70s-era Macon before ascending to the top of their respective musical professions, will perform the world premiere of “R.E.M. Explored” with the Atlanta Symphony Orchestra, led by conductor Sarah Hicks, Friday and Saturday night at Atlanta Symphony Hall.

The program, which includes reworked compositions of songs by R.E.M., of which Mills was a founding member, also showcases the virtuosic talent of the internationally renowned concert violinist McDuffie.

“R.E.M. Explored” includes Mills’ Concerto for Violin, Rock Band and String Orchestra, which has been performed in Atlanta, Athens (Georgia), Rome (Italy), the Aspen Music Festival, and other places since it was premiered by the Toronto Symphony Orchestra in 2016. More recently, in March of this year, Mills and McDuffie, accompanied by students from Mercer University’s Robert McDuffie Center for Strings, performed the concerto at the Grand Opera House in Macon as part of “A Night of Georgia Music.” The concert, which was filmed for broadcast on PBS, also featured former Allman Brothers Band member and current Rolling Stones keyboardist and music director Chuck Leavell.

In addition to Concerto for Violin, Rock Band and String Orchestra, this weekend’s two-night stand at Atlanta Symphony Hall includes songs drawn from the R.E.M. catalog, which have been reconfigured for symphonic performance by Mills in collaboration with arrangers David Mallamud and Carl March. Listening Post recently zoomed in on Mills and McDuffie to discuss the world premiere performance of “R.E.M. Explored.”

Mike Mills: David Mallamud has been our arranger for all of the Concerto iterations. The other arranger on “R.E.M. Explored” is Carl March, who I primarily knew through his work on Big Star's 3rd album, which is a relatively unknown but iconic record for rock ‘n’ roll musicians of the indie pop persuasion. I gave each arranger five songs. I told them I don’t want pure symphonic regurgitations of REM’s music. Instead, use your creativity and imagination to interpret the songs as you hear them. Leave enough melody so the audience will know what song they're hearing, but don't simply rehash the existing song.

How did that approach turn out?

Mills: Carl treats each song as a discrete piece. For several songs, his arrangements are a little moodier, darker, a little more reliant on minor keys. David’s treatment is all one piece with the five songs morphing into each other. It’s a little more bouncy with more discrete movement to it. That said, I’ve only heard the midi mockups they sent. I can’t wait to hear the music actually performed by the Atlanta Symphony Orchestra.

Can you divulge the setlist for “R.E.M. Explored” or is it under wraps?

Mills: It’s not so much under wraps, but I think half the fun for the audience — assuming they don't read their program first — will be figuring out which song we're playing or anticipating what we’ll play next. That said, there are many hits in the program, along with two or three deeper cuts, which were not super-successful.

Describe the evolution of the Concerto as a collaborative undertaking.

Robert McDuffie: In 2015, I proposed to Mike the idea of writing a concerto with a rock band and string orchestra. I always considered Mike to be one of the finest composers in America, whether it's classical, rock or whatever. At first, we talked generally about how the piece would play out. We ended up with six movements: five original compositions and the fifth movement based on an arrangement of “Night Swimming,” which was something I specifically asked Mike to steal from himself. COVID kind of interrupted everything, but, eventually, when I first heard the midi version, I experienced the same joy as when I first heard Philip Glass’ American Four Seasons, which he wrote for me.

As a seasoned concert violinist, what specific aspects or components of Concerto for Violin, Rock Band and String Orchestra appeal to you?

McDuffie: What sets this piece apart is Mike's genius as a melodic composer. The Concerto is one of the more remarkable pieces out there for violin. I treat it the same as I would treat any Dvořák composition. To me, Dvořák is the Mike Mills of classical music.

Mike, in numerous interviews you said that you have always placed a strong emphasis on writing beautiful melodies. How does that strategy relate to composing a concerto or some other symphonic form?

Mills: The true symphonic composers probably see a bigger picture, but not many composers go forward without a viable theme to expound upon, move away from and return to. I love melody, hearing it, playing it. You have to focus on your strengths and melody is my strength. When you’re dealing with the violin, that's what violins do: they play melodies.

Which puts the focus back on you, Bobby. When you started playing Mike’s music, what were your impressions? What did you think about the melodies written for your instrument?

McDuffie: I thought, “This arranger is a sadist!” (collective laughter). The rocking out movements include crazy stuff way up in the stratosphere, running double stops, all sorts of difficult licks. As soon as we’re done talking, I’m going to go practice for all I’m worth. But, seriously, it's a major concerto for violin, which I will eventually be teaching here at the McDuffie Center for Strings in Macon.

What do you consider special about the upcoming performance of the Concerto with the Atlanta Symphony Orchestra?

Mills: The underpinnings of the concerto are the same, but the inclusion of the full symphony, which means adding winds, brass and percussion to the strings, is a radical change. Also, there’s the element of surprise, which comes with every live performance. The music will be just as new to me and Bobby as it will be for the rest of the audience.

Bobby has performed as a guest soloist with the Atlanta Symphony Orchestra on numerous occasions. Likewise, Mike, “REM: Explored” is not your first rodeo with the ASO.

Mills: R.E.M. worked with the ASO a number of times over the years. They played on “Night Swimming” and “Losing My Religion.” Back around 1991, we did a music video with the ASO string section at the Madison-Morgan Cultural Center. (Let the documented record show that video interviews with Mills, Michael Stipe and Pete Buck, as well as portions of R.E.M. playing "Losing My Religion" with members of the ASO at the MMCC on 11/10/91, were broadcast on “MTV's 10th Anniversary Special” — DD). Click here to view the video.

What about the crossover possibilities represented by the Concerto for Violin, Rock Band and String Orchestra, and “R.E.M. Explored.” Have you come across classical music fans who are now avid R.E.M. fans or R.E.M. fans buying Tchaikovsky and Beethoven albums?

Mills: Oh yeah. One of the things Bobby and I are trying to do is break down the walls between genres of music. You don't have to like one to the exclusion of the other. A few years ago, we performed the "Concerto" at Emory University (Schwartz Center for Performing Arts — DD). A friend of mine in the audience was surrounded by a group of ladies of a certain age and disposition. At first, he said, they were expressing skepticism: “Oh, dear, I’m not so sure about this.” But, by the end of the third song, they were standing up and dancing. The Venn diagram between classical and rock ’n' roll occupies a lot more space than you might think. —CL— 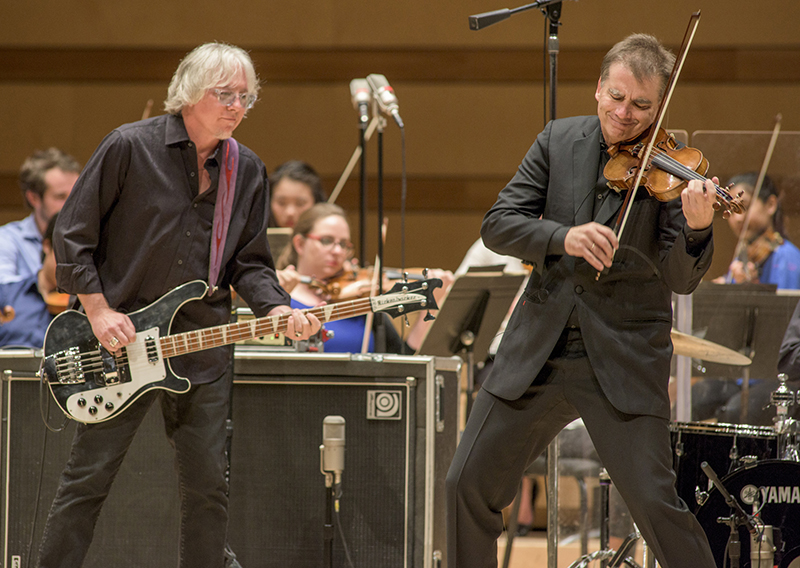