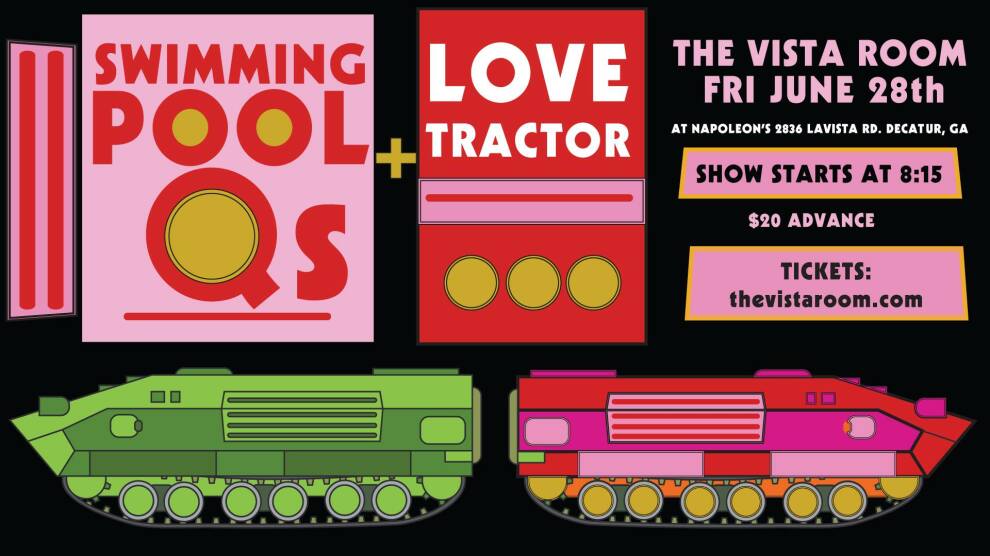 OVE TRACTOR
Love Tractor (1980–2002) a band from Athens, Georgia, founded in spring 1980 by guitarists Mark Cline, Mike Richmond and bassist Armistead Wellford. Like The B-52's, Pylon and R.E.M., Love Tractor is lauded by critics and music historians as one of the founders of the Athens, Georgia, alternative rock scene. Love Tractor toured extensively and recorded six critically acclaimed albums, consistently topping the college and alternative charts. Love Tractor was particularly known for their instrumental rock.1

After a return to the public eye in the late '90s, Love Tractor released 2001's swan song The Sky At Night. The group disbanded in 2002.

THE SWIMMING POOL Q'S
Founded in Atlanta in 1978, The Swimming Pool Q’swere among the first generation of Georgia’s celebrated New Wave bands that included THE B-52’s, THE BRAINS, PYLON and R.E.M. When original members Jeff Calder and Bob Elsey were joined by Anne Richmond Boston, the initial configuration of the Q's quickly established a reputation for superb musicianship and originality. With a barrage of East Coast and regional dates beginning in 1979 (including the Southern leg of the first major POLICE tour), The Swimming Pool Q's developed the confident live presentation they have maintained into the present era.