The 19Th Represents: Equality On The Ballot 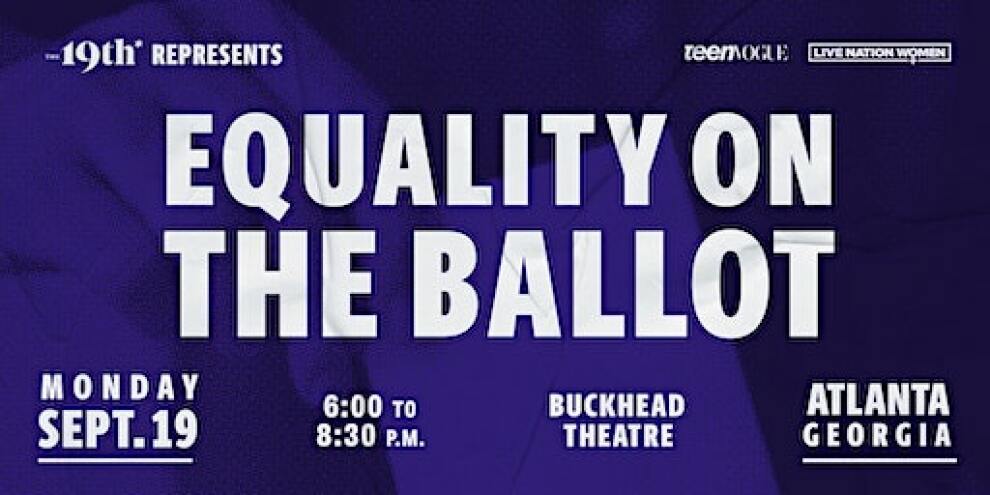 The 19th is heading to Atlanta! Join us on Monday, September 19 for critical conversations about the 2022 midterm elections.

The 19th is heading to Atlanta! Join us — and our partners Live Nation Women and Teen Vogue — on Monday, September 19 for critical conversations about the 2022 midterm elections. Hear from organizers and leaders about what’s motivating women, especially women of color, and LGBTQ+ people to come out to vote in local and state elections this November.

Editor-at-Large Errin Haines will interview Democratic nominee for governor of Georgia, Stacey Abrams, who has become a leading advocate for voting rights on the national stage. We’ll also bust myths around monolithic voting blocs and explore how recent legislation — like anti-LGBTQ+ bills and rollbacks on reproductive rights across the country — has pushed people on the margins to defend their personhood.

If you won’t be in the Atlanta-area, but want to watch the online watch party event on Thursday, September 22, you can RSVP here.

Stacey Abrams (@staceyabrams) is the 2022 Democratic candidate for Georgia governor. After serving for 11 years in the Georgia House of Representatives, she spent seven years as the minority leader. Abrams was the first Black woman to become the gubernatorial nominee for a major party in the United States.

Melanie L. Campbell (@coalitionbuildr) is president/CEO of the National Coalition on Black Civic Participation and convener of the Black Women’s Roundtable. Campbell has served as an adviser to U.S. presidents; members of Congress; corporate, labor and nonprofit executives; philanthropists; faith leaders; and others on critical issues impacting Black America.

Allison Russell (@outsidechild13) is a three-time Grammy-nominated singer and songwriter. She is co-founder of the bands Our Native Daughters and Birds of Chicago. In her debut album, “Outside Child,” Russell unpacks her youth. She sings about deliverance and redemption, about the places and people and realizations that helped her survive and claim her freedom.

We are committed to providing an inclusive, accessible experience for all attendees. Buckhead Theatre is fully ADA compliant. We will have an ASL interpreter at the event. If you would like to request another accommodation, please email us at events at 19thnews.org and we will do our best to assist you.

The 19th thanks our sponsor: Ms. Foundation

Note: our sponsors play no part in the selection of our event participants or programming.

The 19th is an independent nonprofit newsroom reporting at the intersection of gender, politics and policy. We aim to empower women, people of color and the LGBTQ+ community with the information, community and tools they need to be equal participants in our democracy. The 19th aims to level the playing field with:

Free-to-consume and free-to-republish journalism that reimagines politics and policy coverage through a gender lens
Deep-dive, evidence-based reporting that exposes gender inequity and injustice, and reveals surprising and original stories on the issues that most deeply affect our readers’ lives, from health care to the economy
A newsroom that reflects the nation’s diversity, and is devoted to covering all people with empathy
A digital platform for civil conversations and community building, and national events that bring our readers into direct contact with their elected officials

The 19th aims to be a home for all people affected by the issues we cover. To that end, all members of our community are expected to observe our community guidelines when engaging on our website, newsletters, social channels, events or other platforms.

Learn how you can support our nonprofit newsroom here.

The 19th's virtual events aim to bring women and others marginalized based on their gender together with elected officials, experts and community leaders to discuss issues at the intersection of gender, politics and policy. Visit 19thnews.org/subscribe to receive invitations for future 19th events.