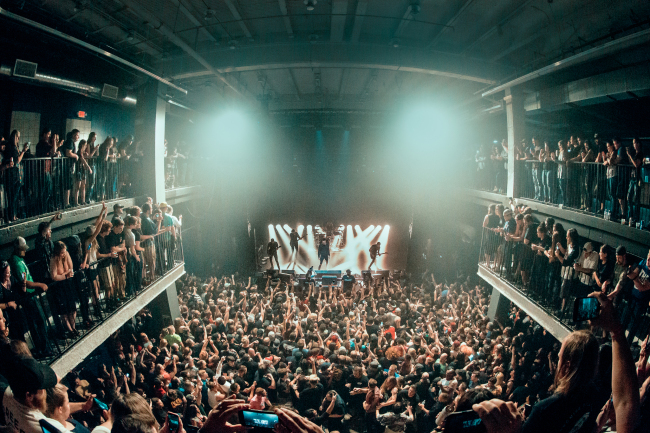 PHOTO CREDIT: Photo by Elena de Soto
Call: (404) 577-2202 or visit lanierparking.com
Tucked away in the Kenny's Alley section of Underground Atlanta, the Masquerade is Downtown Atlanta’s most revered music venue. Over the last 30 years, the club has set the stage for a variety of musical performances, ranging from punk, hardcore, hip-hop, and heavy-metal shows to goth/industrial, electronic music, and retro-themed dance club nights. The venue features three music rooms: Heaven, an 800-1,400 capacity room; Hell, which holds 550 concertgoers, and Purgatory which holds 300 people. Each space hosts a variety of musical styles, from rising local bands to nationally touring acts. Over the years legendary artists such as Nirvana, PJ Harvey, and Kendrick Lamar have all played the Masquerade at various points throughout their careers. Each room surrounds a common open-air courtyard area where fans from each of the various performance stages mingle before shows and during set breaks.

Saturday December 4, 2021 09:00 pm EST 12/04/2021 9:00 pm
Heaven. In the interest of keeping our guests and staff protected and healthy, as well as reduce the chance of COVID outbreaks that could put future tour dates in jeopardy, Jeff Rosenstock and The Masquerade will now require all attendees of Jeff Rosenstock’s upcoming show on 12/4/21 to show proof o...
Cost: $20-$25
[click here for more]

Saturday December 4, 2021 10:00 pm EST 12/04/2021 10:00 pm
Ascension Atlanta is back with a special holiday gift for you!! First up, resident DJ System Fail is brining in DJ Synth Dolli for her Ascension debut!!Also, for only the second time ever, we are bringing you a live performance, industrial band Dark Bloom will be gracing the Ascension stage around m...
Cost: $10-$12
[click here for more]

Tuesday December 7, 2021 07:00 pm EST 12/07/2021 7:00 pm
SOLD OUT. Hell. It is no mistake that mewithoutYou have become one of today’s most fascinating experimental rock acts. The last 15 years have borne witness to the Philadelphia five-piece exercising stylistic evolutions and aerial dynamics with humbling dexterity and untamed ambition.
Cost: $20-$25
[click here for more]

Thursday December 9, 2021 08:00 pm EST 12/09/2021 8:00 pm
Purgatory. Hollow Sinatra is a multi-instrumentalist producer, engineer, and writer from Atlanta, Georgia. Initially setting his roots in the SoundCloud scene of the mid 2010’s, he now continues to push the narrative of his artistry- shifting more into the world of rock-themed electronic.
Cost: $8-$12
[click here for more]

Belmont, In Her Own Words, Action/Adventure

Friday December 10, 2021 08:30 pm EST 12/10/2021 8:30 pm
Purgatory. JORDY is a bright light in pop music – his bouncy tracks, sincere voice, and conversational lyrics touch everyone who hears his music. With cotton candy-like tunes that find the power in vulnerability, JORDY is making his mark on the pop music scene.
Cost: $15-$20
[click here for more]

Armor For Sleep, Never Loved, Silence of You

Sunday December 12, 2021 08:00 pm EST 12/12/2021 8:00 pm
Purgatory. Self-produced and independent, Tipling Rock emerged from Boston in the summer of 2015 and have since seen their signature brand of self-proclaimed “Beach Pop” reach unexpected heights. Centered around songwriter and producer Ben Andre’s pristine bedroom pop style, the band is rounded out ...
Cost: $15-$20
[click here for more]

Thursday December 16, 2021 08:00 pm EST 12/16/2021 8:00 pm
Purgatory. Hollow Sinatra is a multi-instrumentalist producer, engineer, and writer from Atlanta, Georgia. Initially setting his roots in the SoundCloud scene of the mid 2010’s, he now continues to push the narrative of his artistry- shifting more into the world of rock-themed electronic.
Cost: $8-$12
[click here for more]

Hollow Sinatra, Its About Time

Thursday December 23, 2021 08:00 pm EST 12/23/2021 8:00 pm
Purgatory. Hollow Sinatra is a multi-instrumentalist producer, engineer, and writer from Atlanta, Georgia. Initially setting his roots in the SoundCloud scene of the mid 2010’s, he now continues to push the narrative of his artistry- shifting more into the world of rock-themed electronic.
Cost: $8-$12
[click here for more]

Friday December 31, 2021 09:00 pm EST 12/31/2021 9:00 pm
Heaven. Under any and all circumstances, brothers depend on each other. Maintaining an unspoken, yet unbreakable bond for nearly three decades, Sevendust draw strength from one another on their thirteenth full-length and second release for Rise Records, Blood & Stone.
Cost: $39-$85
[click here for more]

In the interest of keeping our guests and staff protected and healthy, Dames & Dregs Beer Festival and T...
Cost: $45-$55
[click here for more]

Thursday December 2, 2021 08:00 pm EST 12/02/2021 8:00 pm
Purgatory. Hollow Sinatra is a multi-instrumentalist producer, engineer, and writer from Atlanta, Georgia. Initially setting his roots in the SoundCloud scene of the mid 2010’s, he now continues to push the narrative of his artistry- shifting more into the world of rock-themed electronic.
Cost: $22-$25
[click here for more]

Thursday December 2, 2021 08:00 pm EST 12/02/2021 8:00 pm
Hell. Black Satellite is a rock duo from NYC comprised of Larissa Vale and Kyle Hawken. Having been writing music together for several years, Black Satellite is the culmination of a deep-rooted partnership contributing to their unified writing style.
Cost: $22-$25
[click here for more]

Sunday November 28, 2021 08:00 pm EST 11/28/2021 8:00 pm
Heaven. Join Madison for an intimate evening of conversation where no topic is off limits: TS Madison After Dark Live. Joined onstage by the infamous Lee Tonya, After Dark Live is a show like no other in which Madison and Lee Tonya talk about the issues of the day facing the community. Never afraid ...
Cost: $30
[click here for more]

Saturday November 27, 2021 08:00 pm EST 11/27/2021 8:00 pm
Hell. There’s beauty in life. There’s darkness in death. For Swallow the Sun creative force Juha Raivio, his world is the reverse. The Finnish songwriter is funneling the darkness in life and the beauty in death on new album, When A Shadow Is Forced into the Light.
Cost: $20-$25
[click here for more]

Friday November 26, 2021 08:00 pm EST 11/26/2021 8:00 pm
Purgatory. For HOMESAFE, progression begins with a nod to the past. On One, their debut LP for Pure Noise Records, the band dug deep into their ’90s rock influences, marrying high-octane guitar riffs with buoyant choruses and threadbare attitude that demands listeners’ attention.
Cost: $12-$15
[click here for more]

Sunday November 21, 2021 07:00 pm EST 11/21/2021 7:00 pm
SCANDAL was formed in August, 2006 with four high school girls who went to the same vocal & dance school in Osaka, Japan.They started performing as SCANDAL with aggressive sounds with pop characters. After it was formed, they often performed on the street of they called Shiroten in Osaka Castle Park...
Cost: $40.50
[click here for more]

Glass Beach, Proper., Home Is Where

Monday November 15, 2021 08:00 pm EST 11/15/2021 8:00 pm
Heaven. Crown the Empire was formed in July 2010 by Andrew Velasquez, Austin Duncan, Hayden Tree, and Brandon Hoover during their time together at Colleyville Heritage High School. The band was formed when “Brandon and Austin decided to start jamming together.”
Cost: $25-$30
[click here for more]

The Cybertronic Spree - Party 'Til We Break Tour w/ Hyperspace

Friday November 12, 2021 08:00 pm EST 11/12/2021 8:00 pm
Hell. Hailing from Atlanta, GA, Starbenders are the half way home for misunderstood misfits, fringers and glam punks. Front-woman, Kimi Shelter and her gang have concocted a perfect alchemic blend of androgynous rock and roll power with “stuck in your brain” pop melodies.
Cost: $15-$17
[click here for more]

Tuesday November 9, 2021 08:00 pm EST 11/09/2021 8:00 pm
Purgatory. Oscar Wilde wrote that “the way of paradoxes is the way of truth.” Rapper and producer Jason Mills has faced sobering paradoxes his entire life. He thought it was only fitting to create another with his stage name: IDK (Ignorantly Delivering Knowledge). “Ignorance and knowledge do not go ...
Cost: $15-$17
[click here for more]

Saturday November 6, 2021 08:00 pm EDT 11/06/2021 8:00 pm
Hell. Growth has long been the mindset of MIA GLADSTONE and she wants it to be yours, too. A vegan icon and radical purveyor of self-love by day, the precocious youth moonlights as a true musical triple threat (singer/songwriter/producer).
Cost: $15-$17
[click here for more]

Narrow Head, Yung Guv, Be All End All

Tuesday November 2, 2021 08:00 pm EDT 11/02/2021 8:00 pm
Purgatory. Every four years, the scene resets. With every college graduation and hesitant grasp of adulthood, there are bands being formed in the fire of heated Twitterdiscourse and surprisingly, actual recorded music.
Cost: $15-$20
[click here for more]

Testament: The Bay Strikes Back Tour

Saturday October 2, 2021 10:00 pm EDT 10/02/2021 10:00 pm
Categories: Halloween Ascension Atlanta is here to help you start October, the spookiest of months, right with our annual Halloween event!! Saturday, October 2nd!! This time around resident DJ System Fail is joined by a veteran of Dragoncon's past DJ Weasel!! Together their skills will bring you a ...
Cost: $10 before midnight/ $12 after midnight
[click here for more]

Saturday September 18, 2021 10:00 pm EDT 09/18/2021 10:00 pm
Categories: Dance/ Art Show Ascension returns to you on Saturday, September 18th!! This time around resident DJ System Fail is joined by a local favorite and DJ for the Anne Rice Ball in New Orleans, DJ Seraph returns to our decks after a very long absence!!!! Together they combine their skills to b...
Cost: $10 before midnight/ $12 after midnight
[click here for more]

The Struts Live At Heaven Stage at Masquerade

Monday August 30, 2021 06:00 pm EDT 08/30/2021 6:00 pm
At their inception, BAYSIDE consciously stood apart from the pack and has maintained that commitment to integrity and earnestness for over 18 years. Skipping over pop-punk clichés like landmines and forcefully resisting the fake rebellion and thinly veiled misogyny too often dominating the “scene” a...
Cost: $25
[click here for more]

Ascension returns to you on Saturday, August 7th!! This time around resident DJ System Fail is joined by one of Atlanta's favorite sons DJ Aesthetic! Together they will have you out on our dance floor all night long!!

Our lights, lasers and atmosphere will of course be br...
Cost: $10 before midnight/ $12 after midnight
[click here for more]

Armor For Sleep, Never Loved, Silence of You

$.50 from every ticket to be donated to Girls Rock Camp

Friday July 16, 2021 09:00 pm EDT 07/16/2021 9:00 pm
lectric Feels is an experiential dance party that plays everything from indie rock to electronic dance music all night with amazing DJs, stage production and more! It's a party with a festival feel. We're so excited to bring this back to Atlanta at the Masquerade (Heaven) on Friday July 16th! This i...
Cost: $10
[click here for more]

at Steve Polk Plaza at The Masquerade

Heaven at The Masquerade

Available to replay stream for 24 hours.

Thursday May 27, 2021 06:00 pm EDT 05/27/2021 6:00 pm
Less Than Jake are back on Thursday, May 27th with round 2 of their Late Night with LTJ performance following the success and resounding fan response to their first ever livestream in December 2020. The band will be performing a number of their classics along with music from their newest album “Silv...
Cost: $15-$25
[click here for more]

Sunday April 25, 2021 07:00 pm EDT 04/25/2021 7:00 pm
PVRIS represents the culmination of unapologetic honesty, unbridled artistic passion, and deeply held personal conviction, as evidenced by the devotion of an international fanbase who live and breathe their music.
Cost: $30
[click here for more]

The story of The Besnard Lakes begins at Besnard Lake: a spectacular yet secluded water feature in rural Saskatchewan which the Montreal group’s husband and wife core, Jace Lasek and Olga Goreas, visit each summer for inspiration and escape.

We Came As Romans

Brotherhood lasts forever. No matter what happens, those bonds endure in memories and moments. We Came As Romans hold a similar link between them. After nearly 15 years together, countless sold out shows, critical acclaim, and over 250 million streams,

Livestream: And You Will Know Us by the Trail of Dead

Best New Addition to the Cityscape