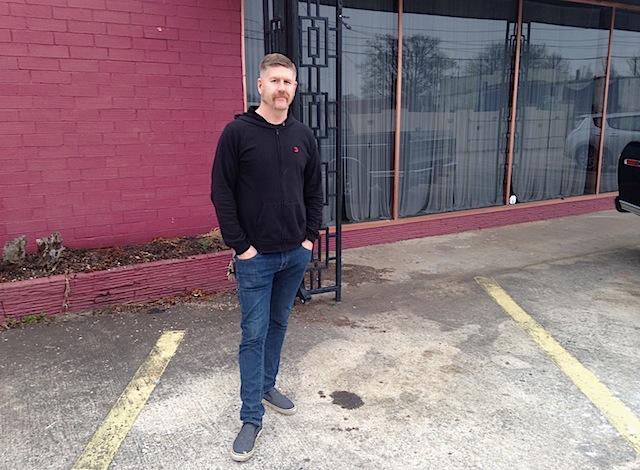 On Saturday morning, February 20, Mastodon revealed via Facebook, that the group has purchased a building that will soon be used to house rehearsal and practice spaces for local artists and musicians. The post, which has since been taken down, stated:


“Very big news for musicians in the Atlanta area, Mastodon have purchased a rehearsal building in the West End and will be looking for tenants, artists and musicians. We will be hopefully opening in the next few months, you can contact me butterslax@hotmail.com to sign up for the waiting list.”
A practice space shortage in the city has become something of a crisis after both Thunderbox and Avatar Studios closed down in 2015. The new Mastodon-owned space is taking over the former home of Othello Event Hall at 1170 Sylvan Road S.W. On Saturday afternoon, I caught up with the group’s guitarist and the project's mastermind Bill Kelliher to learn more about what’s in store with the new space.


Do you see this part of Capitol View / West End changing?

I think so. You can see out the front door, there's a lot of stuff that's up-and-coming. In the next five to six years this whole place will look different. I moved here from Rochester 19 years ago — I moved here in '97 — and I tour a lot. So every time I come home I say, "Oh ... Where'd that building go? Or "What's that new building? And where does that new road go? There's all sorts of urban sprawl going on here. I do like to see growth, and I kind of felt like Atlanta was a little behind when I moved here. Downtown has always been so wishy-washy. Every street has like four names, and none of it follows any kind of pattern. Atlanta is becoming the kind of city where you can actually walk from one place to another. That's one of the good things the Beltline has done. And the Beltline comes within two blocks of this building. They're already developing it right around the corner at Murphy Crossing.

I do see a lot of growth happening here. Wherever the Beltline goes, people go. Look at how much the 4th Ward has changed. It has gone crazy over there. All of the practice spaces have closed down over there, but there's always going to be guys and girls in bands that want to go make loud noise somewhere. Ever since I started playing music I've dreamt of owning a building where that could happen. Even when I was a kid, I went out and stole a bunch of wood from all of the houses that were being built in my neighborhood, and I built a stage in my basement. And I would put on shows down there. Music is everything to me, from playing music all the way to the business end of it. Artistic expression, for me, has been my go-to drug for a lot of years now. I grab my guitar, but for a lot of people, there is nowhere to do that anymore.

It has become sort of a crisis since we lost Thunderbox and Avatar Studios.

Thunderbox was a really great place. But even before it went away, I could see it coming from miles away — years beforehand. So I started looking at buildings, but it never came to anything mostly because of time. I tour a lot. Now I'm home and the time is right for me to get all of this wrapped up. There's such an opportunity here, and there's a lot of need for it. I'm sure I'm not the only person who's thinking about this, so I'm willing to bet we will see more places like this coming up in the future.  But I want to make mine a little more special. Mastodon will be here. We'll have our name attached to it, which is a really cool thing. We draw a lot of water in this town, I guess. So for whatever that's worth, I like to use that to interact with people — musicians.

Something that was lost with Thunderbox was that common meeting area. People that didn't know each other crossed paths there every day. Ideas were born there, and connections were made there because all of these musicians were in the same place.

Yeah, you could walk by someone's door and hear something that caught you off guard. There was a lot of gospel music happening there, right by the vending machines. They'd have their door open, and they were just jamming, singing like crazy. I'd peek in for a few minutes and just watch. It got me out of my metal world, when Mastodon was writing a record and things were getting tedious. I could walk over there and it might spark something artistic.

I want this to be a cool place where people feel safe, and can express themselves in an artistic way. Do what they want to do in their room. Over the years there have been practice rooms that I've used that just didn't feel good. I didn't feel a spark there. I don't want this to be like that. I want this to be somewhere that people look forward to. At first I thought it will be for more eclectic bands that are "more serious." I know how hard it can be to chase down musicians for rent money (laughs). But I don't want to think like that. That's not part of my gig. So I put the word out, and a lot of people got in touch.

Yes, the Facebook thing that went up this morning. I just closed on this place yesterday, and now I have the keys. But we have a lot of cleaning up to do, and we still have a lot to go through with city permitting, which can take a while. But I'm doing everything by the book — doing it the right way, and I want it to be a cool, communal place. Even if you don't play music and you want to have a room to do whatever: ceramics, draw, paint. Whatever it is that artists do, I want it to feel more like that kind of community. Kind of like what you have with C-11 and C-12 in the Metropolitan Lofts where you have little communes of people that do their things.

How long before you can get bands in here?

I don't think it will take all that long to build out the rooms. Permitting is going to take a few months. I'd say hopefully three months. It's almost March now, so maybe it will be up and running by summertime. That would be great. But this is my first time taking on such a big endeavor.

And this is a Mastodon-owned operation, but you are the point man with this project. It's your idea, correct?

Yes, this is a Mastodon-owned building. I've just spearheaded the whole thing. I've been on the frontline, and it's been my dream for many, many years. I know the guys in the band have always wanted to do the same thing. We all tend to agree when it comes to a vision, and a lot of other things. We're all good friends, and we all see eye-to-eye. When I brought this idea to them everyone was like, "Hell yeah, this is a great idea." But I've been steering the ship in terms of finding the building and going through all of the legwork. I will continue to do that until we get our first tenant in here.

So your roll is going to be pretty hands-on when the construction begins.

Oh yeah, I already have plans drawn up, and I think they're already in the city's hands. I've been talking with contractors and builders. And I've been known to swing a hammer here and there. So you might see me in here doing something pretty soon.

After we get rehearsal rooms established I do want to buildout a nice recording studio. Probably in the back, away from this building so it's a little more separated. There's a lot of land back there. But everything depends on how well we do financially — if we can keep this place up and running. I think we can do it, if it's done right.

This is a pretty big thing to swallow. But I've looked at a lot of buildings in Atlanta. And when I walked in here I thought, this place has a lot of potential. It has really nice floors, and a really sturdy foundation. There's a lot of land here, too. I like all of the greenery. You can go outside and roll around in the grass if you want to. The building itself doesn't have any load-bearing walls. I could knock down every wall and just build rooms. That's basically what we're going to do. I've fallen in love with it, for sure.

How much land do you have here?

It's about an acre and a third.

How many square feet in the building?

How many practice spaces do you think you can build with this space?

I think I can get 13 upstairs. Maybe another six or seven downstairs. I want to get the general population's ideas about what sizes of rooms they need: A 10'x10' room? A 20'x20' room? And build it to suit the needs of what people are looking for. Some bigger bands might just need a 6'x10' storage space. I want there to be options. If it's just one dude and his drum set who wants a 9'x9' room, I want to have that. I don't want to paint myself into a corner where every room is 10'x20' and that's all you can do. I want there to be options.

You are talking with people now about space?

Yeah, I have a list of about 30 people who are in bands who've been in touch since I put it on Facebook. ... Yes, 30 people, just from today. And a lot of my friends have hit me up first. Obviously I need to take them into consideration, but I'm sure there will be plenty of room for anyone who wants a room.

For now, I'm aiming all of my guns at getting every room upstairs built, and making sure the city is cool with everything. Then I can start thinking about building a deck out back, maybe a basketball court, a garage, put in a foosball table, maybe a pool table, and all of the cool additional things. But all of my energy is focused on getting the remaining stuff out, and building rooms. There's a lot of HVAC work that needs to be done, a lot of electrical work ... There's so much work that goes into designing simple, square box rooms.

Are you handling the buildout in phases?

I'm doing the upstairs first, because I don't think I can afford to do everything and wait that long. I want to get people in here, and happy. Then, once I can save up some money, I'll start working on the downstairs. As of today, I have to start paying back the bank. All of this time when there's no money coming in, means it's my money going out. So I have to start turning some of the space into money to pay the bills.

So what are you going to call this place?