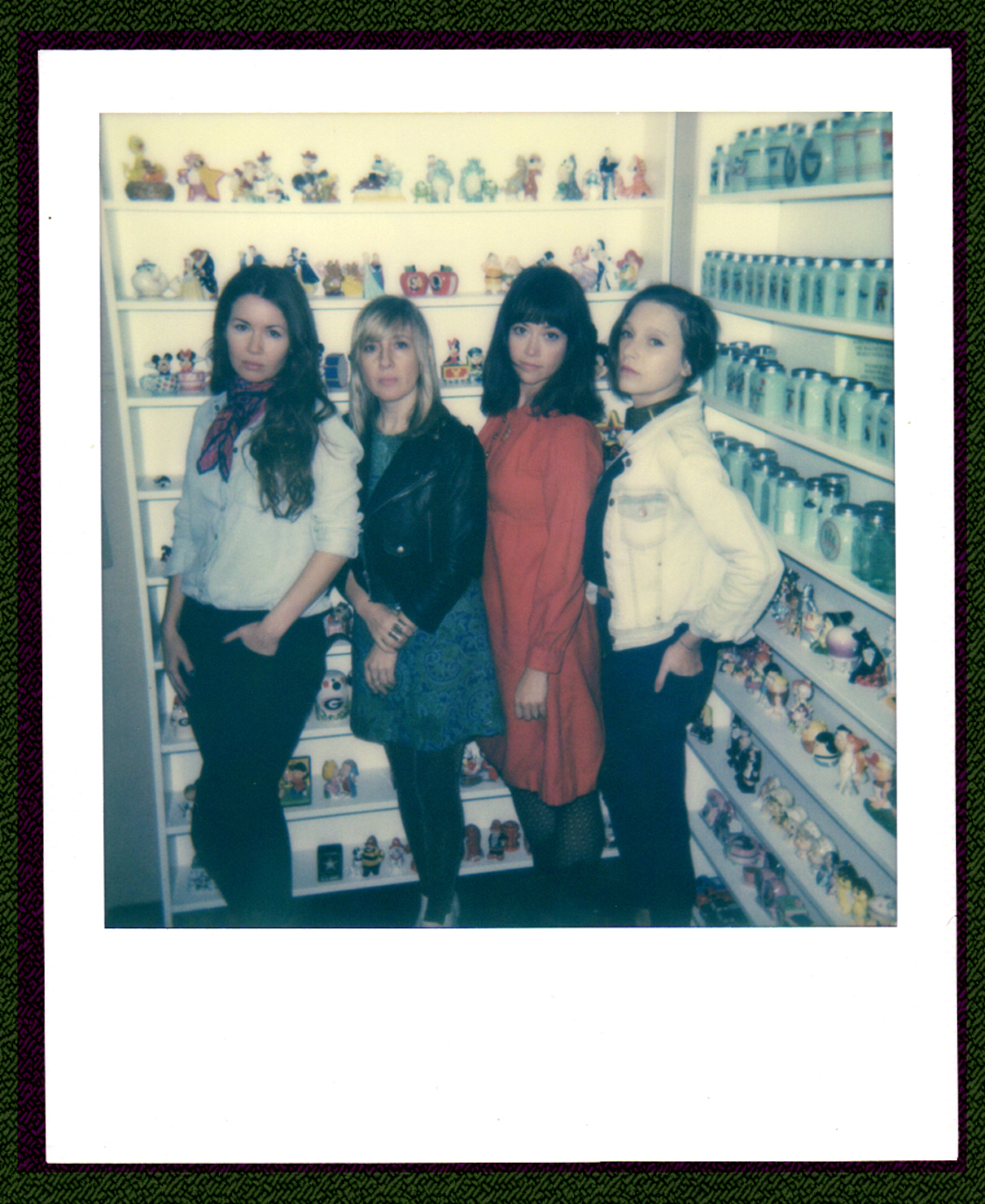 Shantih Shantih broke a period of relative silence this year when the group announced the May 20 arrival of its debut full-length Winter in September (Wild Honey, Dusty Medical Records). Streaming album tracks "Come and Treat Me," "Snails," and "Ruby," capture the multi-part harmonies, dreamy psychedelic riffs, and sure-handed beats that have won over live audiences both at home and abroad.


embed-2
The deep bonds of friendship between Shantih Shantih's founding members have driven the band's early successes (which include a live debut at SXSW in 2013) and sustained momentum. The original trio, which includes Anna Kramer (lead guitar), Anna Barattin (vocals, guitar), and Julia Furgiuele (drums), see each other as family, both figuratively and literally. Sisters-in-law Furgiuele and Barattin are married to Gringo Star's Nick and Peter Furgiuele, respectively.

You’ve been together a little over three years now, right?

How did you all get together?

Julia Furgiuele: I lived here and Anna Barattin lived in Italy. She started dating my husband’s brother. That’s when we started hanging out a lot and playing around with music a little bit. And I knew Anna Kramer …

Anna Kramer: We’ve been friends for more than 10 years, I think?

AB: I’ve been here five years. It took me two years to start playing again. We talked about it a bunch of times. I remember I went back to Italy for a Christmas break, and Julia bought a drum kit. When I got back, she was excited and ready to go.

I just recently made this connection, but Barattin was in Vermillion Sands. I saw you at 529 in 2010, maybe?

AB: It was. It was the year before I moved here. I didn’t know these guys back then.

AK: If I’d known, I would have gone to the show.

embed-1
So basically, the two of you were planning something, then Anna Kramer came in and you added (original bassist) Valentina Tapia along the way?

AK: Actually, I was invited to a Furgiuele family dinner as an honorary relative. I had been in Ocha La Rocha, and Johnny, the singer, had just moved to L.A. I like to have another band besides my band, and really I just wanted to jam. So I said, ‘If you guys want to jam sometime ’ And they were like, ‘How about Sunday?’’ It was perfect timing to start another project.

Where did the name Shantih Shantih come from?

AB: T.S. Eliot’s The Wasteland. It means peace. We thought it was a good way to start the band.

AB: I pretend to be!

How long did it take to go from jamming to playing live?

AB: It didn’t take long. We went to SXSW in March, and I was talking about Christmas break. So just a few months.

AK: I was out of town for SXSW, so I missed our first show. The Atlanta Film Festival at Goat Farm March 20, 2013 was the first local show.

So your first shows, out of town and here, were at events with built-in crowds.

AB: It was good for experience. Julia hadn’t played out before, and I hadn’t played guitar in a while. It’s always tough when you don’t play, and you start back.

AK: It always sounded great. It never sounded like we had just started. It gelled pretty quickly. Maybe it’s because we were friends before and we have similar musical interests. We wanted the same sounds to come out.

AB: And we like to hang out. We’re not the kind of band that just meets up for practice. We like to meet up for beers or stay forever after practice because we have to tell each other everything that happens to us.

Julia, were you picking these two’s brains since they have experience touring and performing?

JF: Yes, but I did learn a lot about the music industry from my husband. He’s been in Gringo Star for as long as I’ve known him—15 years. I’ve learned from him what it’s like to be in a band on the road and what it’s like to handle the business end.

JF: It’s more fun to do with the ladies. We’re like sisters.

AK: Julia and I would just hop in the van with Gringo Star. My boyfriend used to play with them also, so we’d be on tour with them even if we weren’t playing. We’ve gone to England and a lot of different places. It’d be six people sleeping in a van. It’s definitely not glamorous, but at least it's family. And if we love it this much after all of that, it’s a good sign.

JF: We’re itching to get back on the road ourselves.

AB: And see lots of friends. The way music works sometimes, you don’t get to see your friends because they're all scattered around. If you’re in a band and you have similar interests, you get to see each other once a year or once every two years.

The album has been a couple of years in the making, right?

JF: We got together whenever we could, and we weren’t in a hurry.

AK: As opposed to booking one solid time to record.

AB: We recorded it at home with Peter. It's nice because we could take our time. We'd listen to a song and say, "Maybe we can change this part." Then the song would be another song. It was a never ending process because we wanted to get the sound we wanted. And Peter kept buying new pieces of equipment for the studio, so he’d say, "Let’s try it with this microphone!"

AK: Peter’s like the fifth Beatle. He really did put so much time into it. We’re so happy with the results.

AB: I want see the vinyl. I’m really excited about that.

JF: We have the CDs. The vinyl is being shipped from Italy, so we’re hoping to have it in time for the show in Atlanta.

AK: It’s being put out here, too, on Dusty Medical. We’re going to go play a show up there in Milwaukee and play a show with one of their bands.

AB: Are you familiar with that label?

They put out bands like the Goodnight Loving and Plexi 3.

AB: It’s small, but they’re really invested in what they do. And they support Bernie, which is a plus.

I’d like to believe most labels that would put out your music support Bernie Sanders, but that’s not a given.

Wild Honey from Italy is also putting out the album.

JF: Franz Barcella has known Anna for years. We got to meet him when we were on tour in Europe the last time in 2014. He came out to one of the shows and is a really nice guy and loves the music. We reached out to him.

AB: He said yes right away.

When did Nikki Speake join? I didn't realize she was in the band before I saw the release show poster.

AK: She probably started about five or six months ago.

JF: New Year’s Eve at Aisle 5 was her first show. She had to learn the whole set in a short amount of time.

She’d be an ideal guitarist to learn your set fast. Plus she’s great with harmonies.

AK: She’s got a beautiful voice.

JF: I’d seen her in Midnight Larks and thought it was great. We were all thinking about asking her to join at the same time. And she dates our friend Max Cooper, so this is all in the family type stuff.

AB: I’m going to pick her brain on the road about diets. She’s a dietitian.

JF: I wonder how she’ll influence how we eat on the road. So far, we’ve only talked about Taco Bell.