Meatwad on his father, Dylan, Neko and the joys of Christmas 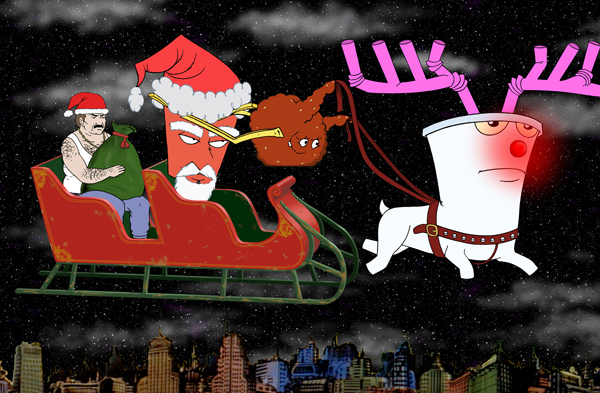 (MP3 not available on the site any longer)


__Chad Radford:  What kind of man was your father?

Meatwad:? My father was a hard man to know and I saw him infrequently. Usually he would visit me every Thursdays around 8. This was back when he was a black doctor with colorful sweaters who had a son named Theo and a daughter named Rudy and they was all on NBC. We drifted apart over the years and I ain't so sure what he's doing now. Maybe he's driving a big rig with a chimpanzee named The Bear. Or maybe he's a Pokemon. My point is, it's hard to believe where life takes you. And I can't spend my life chasing someone who don't want me. Mostly cause I don't know what channel he be living at.


I have heard rumors that you are kosher. Is that true and did it affect your decision to make a Christmas album?


Oy gevalt! Meshuggenah! The media loves to draw attention to the fact that I am an orthodox Jew and a devout Buddhist with Scientological leanings. It is well-known that I was raised in the temple and a Rabbi done took out the braised pork out of head and abdomen on account of it don't jive with my beliefs. All y'all jews in the Dirty South know what I'm talking about. Represent!__