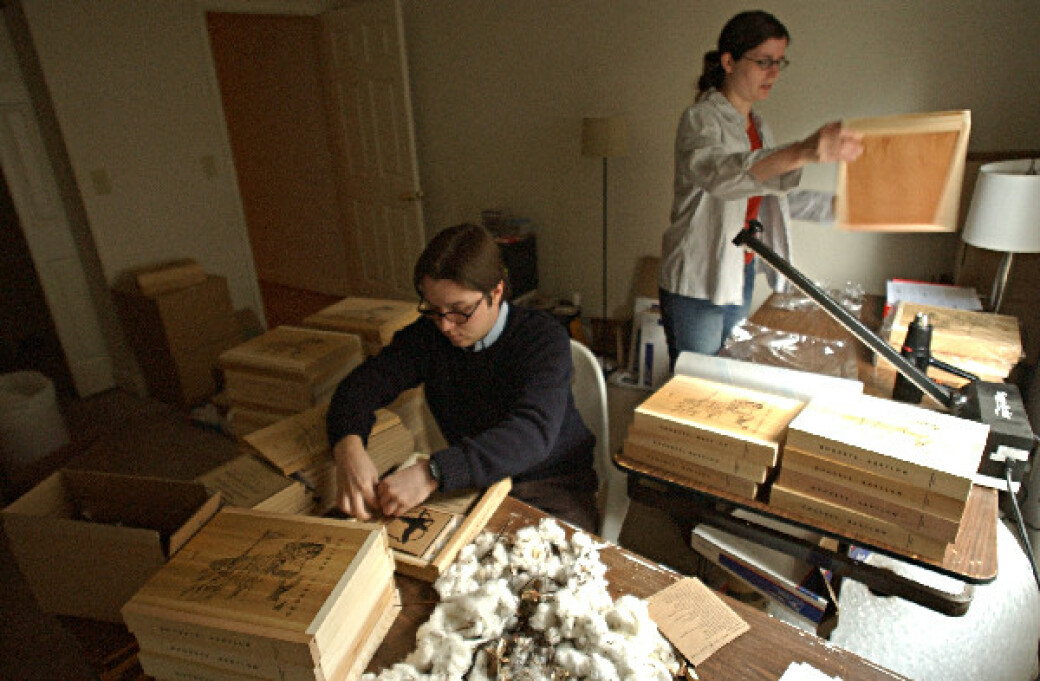 When Lance Ledbetter set out in search of gospel music from the 1920s-'30s to play for his Sunday morning "20th Century Archives" radio show for Georgia State's WRAS in the late '90s, it was the beginning of a legacy. It was the first move that would lead to him founding Dust-to-Digital, a reissue label whose inaugural release, the six-CD Goodbye Babylon box set, was the culmination of his searches. Since releasing Goodbye Babylon in 2003, the label, which Ledbetter runs with his wife April, has become known for its lush packaging of long-forgotten American music --earning 6 GRAMMY nominations for both packaging and its archival efforts along the way. Lance himself has been nominated for three GRAMMYs, and in Feb. of 2009 the label won a GRAMMY for Best Historical Recording with The Art of Field Recording Vol. 1. Meticulous attention to detail and extravagant packaging are Dust-to-Digital's M.O., keeping collectors in the poor house and raising the bar for like-minded labels to follow; and it all began with Goodbye Babylon.

Chad Radford: How did Goodbye Babylon come about?
Lance Ledbetter: Back in the late '90s I was working at WRAS — that was in '97 when Harry Smith's Anthology of American Folk Music came out. Around that time the Sunday morning slot was opening up where there had been an old time radio show. So I got the slot and would play two hours from the '20s and '30s every Sunday. All I had was the Harry Smith Anthology, so I started looking around town for more music to play.
I started going to local record shops and finding stuff. HMV at Lennox had all of these Document releases for like $5 or $7 on CD. I was finding used LPs at Wuxtry and Wax and Facts, and Full Moon had all of these Yazoo cassette tapes for like $3.50 a piece.
So I tried to get to a point where I could play stuff that represented all of the genres that were being recorded back then. The show was on Sunday mornings from 9 to 11 a.m. so what I really thought should be on there was gospel music — so much of the audience would either be en route to church or on there way home from church. I started looking for it and that's what I couldn't find.
I set out to find who some of these record collectors were who were supplying the old 78 rpm records for the reissue companies to put out. The name that I kept seeing over and over again was Joe Bussard. I did some looking around on the internet and I found an article that a guy named Eddie Dean had written for the Washington City Paper, called "Desperate Man's Blues: Joe Bussard parties like it's 1929."
I read the article and was able to figure out first of all, this guy has got the goods. Secondly he's probably cool enough to deal with some young college guy like me, and thirdly I was able to track down his phone number and the name of the town where he lived, Bethesda, Maryland. So I called him and quickly learned that you don't talk to Joe, Joe talks to you. I tried to steer the conversation as much as I could to the fact that I was looking for gospel music for my radio show and he said 'I'm gonna send you down some catalogs, kid. You go through them and let me know what you like and for $0.50 a song I'll put them on cassette tape for you."
So I started going through these lists that he sent down and I had no idea that it would take as long as it did. Then he started sending down these cassettes and I played them on the air. It was unbelievable that so much of this material was unavailable. You just couldn't find it, and that's when I decided that I was going to figure out how to reissue this stuff as a record label.
I was also doing an internship at Table of the Elements, but I had never thought about starting my own label. I thought 'okay, I'll do a gospel CD and see how it goes.
When I started contacting these reissue label owners I started learning how to do it and in Feb. of '99 I decided to do it. I quit the radio station and I started working a full-time job, but in my spare time I was listening to these tapes that Joe was sending to me and making notes on what I liked, what I wanted to use and what was unavailable. Then I started the four-year process that resulted in Goodbye Babylon in Oct. of '03.

It became so much more than one lonely gospel CD.
Yeah... Six CDs in a cedar wood box. We still hand assemble every one, we run the cotton down the side and put the 200-page book and the CDs that form the cross. We worked with Susan Archie here in town and we just tried to concentrate on every single component of the set to make sure that everything was perfect.
How did the idea to make it such a lavishly packaged thing come about?
It took me a year-and-a-half to listen to all of the music that Joe sent down. Two cassettes a week for a year-and-a-half. That's probably about 70 or 80 weeks of listening to cassettes and making notes. Putting on my headphones and listening to this stuff transformed me, so I wanted to put together this thing that if it were the 1920s or '30s and you were to walk into a general store, you might could see it on the shelf — I wanted it to be fitting for this music. I found a company in Canada that makes wine boxes for corporate Christmas gifts. I told them my idea and they said if you draw the blueprint we'll make you a template to see if it works.

Do you keep Goodbye Babylon in print?
Yeah. We still hand pack every single one of them. So when you hear stories about how Bob Dylan gave one to Neil Young for Christmas, or how Brian Eno has one, they all went through these hands first and then went to those guys' record collections. We're gonna stay with it. As CDs go out of style we may have to reconsider keeping it in print, but for the foreseeable future it will be in print.

You said you wanted to do "a" gospel CD and see how it went — It opened the floodgates for you.
We didn't know how well it would do. We didn't have distribution for it or anything like that. What really got the ball rolling was when Chris Morris at Billboard wrote an article about it that said 'this guy is doing this gospel set and he needs distribution,' and he put my home phone number in Billboard magazine. I thought it was weird, but it set us up. The very first outlet to review Goodbye Babylon was The New York Times. It had been out for about a month...

They beat me to it?!
Yeah they beat you. For me that set the tone too. So much music writing was just in print publications back then, and from there The Washington Post got interested in it and then The AJC got interested in it. I thought it would sell a couple of hundred copies within the next year and we would have a garage full of them for the rest of our lives. But it took off. It found an audience really quickly.

But it did not win a GRAMMY.
No. It was nominated for two of them but it didn't win. For packaging the Talking Heads box set won. For the historical category it was a double CD put out by Lost Highway called Night Train to Nashville.

You won your first GRAMMY in Feb. of '09 for The Art of Field Recording Vol. 1.
That won the historical category and I was real excited to go out there with Art Rosenbaum who put together the set, and I got to experience it with him.

And it all started with Goodbye Babylon.
That's the one that we're most known for. It's absolutely the biggest seller and it's success has allowed us to do all of the other projects that we've done. It's our core release that funds a lot of other ideas and projects. We still try to achieve the same level of quality that we had with it, but it took us four-and-a-half years to make, and you can't do that every year. You can't make a six-CD wood box with a 200 page book every year, but we're really proud of it.
It was nominated for two GRAMMYs and I thought that was the highest that it would achieve. Then about 6 months later on weekend edition Neil Young went into about a minute-and-a-half monologue about how Bob Dylan had given him one for Christmas and I almost fell out of my chair. That was really touching, and it was so much better than getting a GRAMMY.