A respected filmmaker, musician and artist within underground scenes in Atlanta, New York, Philadelphia, Dallas, and such far away locales as Manila in the Philippines. 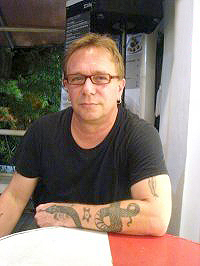 Underground filmmaker, musician and artist Joe Linhart (better known as Joe Christ) passed away on Father's Day during the evening hours of June 21 in his Dekalb County home. According to toxicology reports released to his family today, Linhart died of a heart attack in his sleep.-

Born in Washington D.C., Linhart relocated to Atlanta during the late 1990s following a nomadic lifestyle of producing shock art that made him a respected regular within underground scenes New York, Philadelphia, Dallas, and such far away locales as Manila in the Philippines.-

During his Atlanta years, Linhart regularly worked with the shock website Consumption Junction and was a former guest artist with the the Dragon*Con festival. All the while, he released a steady stream of independent films, including 2005's That's Just Wrong! co-starring Atlanta sex author and mistress Dolores French, and other rousing titles including Amy Strangled a Small Child (1998) and Acid Is Groovy Kill the Pigs (1993). In addition to his film and visual art productions, Linhart also produced an equally balanced collection of rock recordings with such acts as Joe Christ and the Healing Faith (see interview), and Los Reactors.-

Famous for wearing black T-shirts and jeans accented by macho tattoos upon his forearms, Linhart may have appeared menacing at first glance but upon further inspection most people discovered a truly kind soul and passionate artist. He was a father and friend whose untimely death leaves countless people in shock. But would Joe Christ have had it any other way?