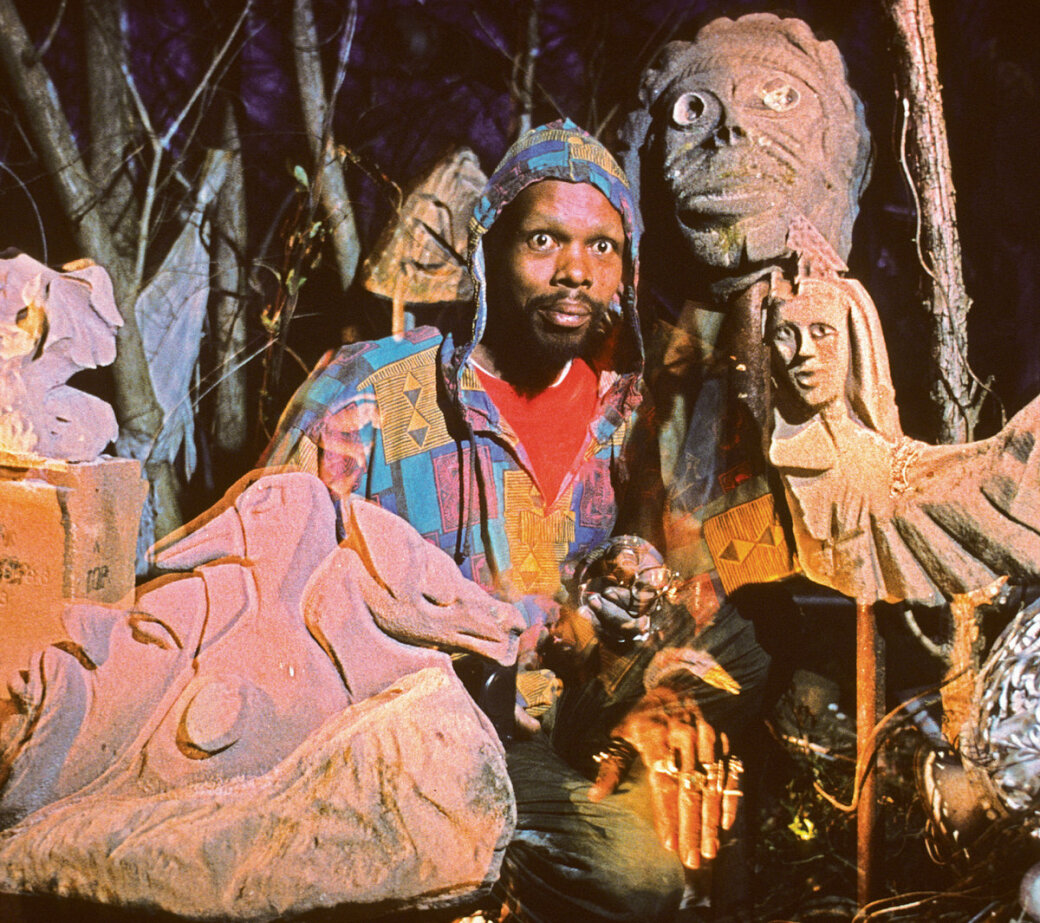 Sitting comfortably, ensconced on a couch at Grocery on Home, the airy, converted red brick loft residence-cum-performance space near Grant Park owned by art curator Matt Arnett, Lonnie Holley's bright eyes dart in every direction from behind tiny square-framed spectacles, which impart a schoolteacher's benign countenance to an already boyish face. "As a child and growing up, I always wanted to sing, but what I had to say took too long," Holley recalls, responding to a question about his solo debut album, Just Before Music, which was released in November by Atlanta's Dust-to-Digital label. "When I stood up for testimony in the church, and I'd start testifying, I was always asked to sit down or cut it off — 'That's enough, Lonnie,' they'd say. When I sing about these things, I'm being there as the preacher," he adds. "I'm bringing you my sermon. I'm bringing you the sermon that you need to hear."

Populated by simple, playfully melodic song-poems, meditative long-form ambience, gospel-infused incantations, and soulful, rhythm-and-blues tinged grooves, Just Before Music inhabits a realm that's difficult to define. Holley's soft tenor voice warbles with a slight lisp, while his imaginative wordplay lures in the listener with witty insights into contemporary consumerist culture ("Planet Earth and Otherwheres," "Earthly Things"), which recall both in imagery and vocal dialect the fantastical intonements of the late Sun Ra, who shared Holly's birthplace. That's not all Holley shares with the immortal Arkestra leader from Saturn. His music serves a higher purpose, which may not be discernible without listening carefully, with an open heart and an open mind.

Born in 1950 in Birmingham, Holley is the seventh of 27 children. Other than a name, he never knew his father. When he was not yet 2 years old, his mother sent him away to a foster home where he spent his formative years tormented by alcoholic caretakers. As an adolescent, he was brutally treated under state juvenile custody before being rescued and brought back home by his grandmother at age 14. "I didn't have no more than a seventh-grade education," Holley says. "I didn't know how to read and write that well. But, as far as what life had taught me, I had values that surpassed those that had paid for theirs."

In 1979, Holley's niece and nephew were tragically killed in a house fire. Unable to afford tombstones, he sculpted his own version using the gritty compactable detritus left behind by sand metal casting, a substance which was abundantly at hand in the environs of Birmingham's steel mills. The "baby tombstones" garnered notice from the local community, followed by attention from serious aficionados, such as William "Bill" Arnett (Matt's father).

Within a few years, Holley's sculptures, paintings, and collages were widely touted within the small but influential world of "outsider art." His work has been showcased in the Smithsonian American Art Museum, American Folk Art Museum, High Museum of Art, Birmingham Museum of Art, and at the White House. He was prominently featured recently in an exhibit at Agnes Scott College in Decatur, Groundstory: Tales from the Shade of the South, which closed in November.

Each of the seven songs on Just Before Music was improvised and inspired by his static art. "What feeds my mentality actually turns out to be my music," Holley says. "These pieces of music, like all my other work, are pieces of my life."

By his own count, Holley has recorded thousands of cassette tapes featuring him singing and playing various objects and instruments. Although none of the cassettes were ever distributed, Holley's claim is corroborated by a few close friends who have seen and heard the evidence. "I would sing in my environment, in the neighborhood, and sometimes the children would hear me singing over the loudspeaker that I had," he says. "But this making Just Before Music is the first time I'd ever been in a studio."

"We've had people come to us with a lot of great original album material, but they never quite fit what we're doing," explains Dust-to-Digital co-owner Lance Ledbetter, whose efforts were recognized yet again in 2012 with a Grammy nomination for Opika Pende: Africa at 78 RPM in the category of Best Historical Album. "We're always looking back, but only as a way to move things forward," Ledbetter says. "We want to shine a light on things that apply to now and the future. When I first heard Lonnie, that's what I thought, 'This is now, and it's the future and the past.'"

Arnett goes on to explain that Holley didn't come to the studio with any prepared lyrics. "He's been carrying them around in his head for 20 years. We would find the right sound on the keyboard, and Lonnie would say, 'That's it, close the door and hit record.'"

During one of these sessions, Holley produced the most poignant song to appear on Just Before Music, "Fifth Child Burning." The song pays tribute to his sister's dead children, as well as to the four young girls who perished in the infamous 1963 bombing of the 16th St. Baptist Church in Birmingham by members of the Ku Klux Klan. Supported by a smoothly pulsating keyboard riff, Holley drives the narration forward, guided by deeply stored sensory impressions:

"Now what you want for Christmas, baby? I'll buy you that new dress for Easter/Say that boyfriend gave you what for Valentine's Day?/Oh those new shoes Grandma sent you .../That box of secret things you got in the closet .../I said why didn't you get rid of those old cell phones?/Oh, you got so much memory in them."

As the Dust-to-Digital crew sat spellbound in the engineer's booth, Arnett recalls, being struck by a realization. "I turned to Lance and said, 'He's in the house. He's walking through his sister's house, doing an inventory of the stuff that's there before it blows up and catches fire."

Holley's improvisatory approach lends a palpable sense of emotional gravitas and urgent reporting to topics ranging from the ways in which art is rendered ("Looking for All") to the transition in cinema from analog film to digital production ("The End of the Film Era"). Overall, a playful, childlike naiveté permeates the mix, but only up to a point; beyond that point are the visionary musings of a man whose life has been hard cast in stone, and who understands that everything, eventually, crumbles into so much dust. "Lonnie is so unique and so powerful," Ledbetter says. "People have asked me whether we'll do another new artist. I don't know if we ever will."