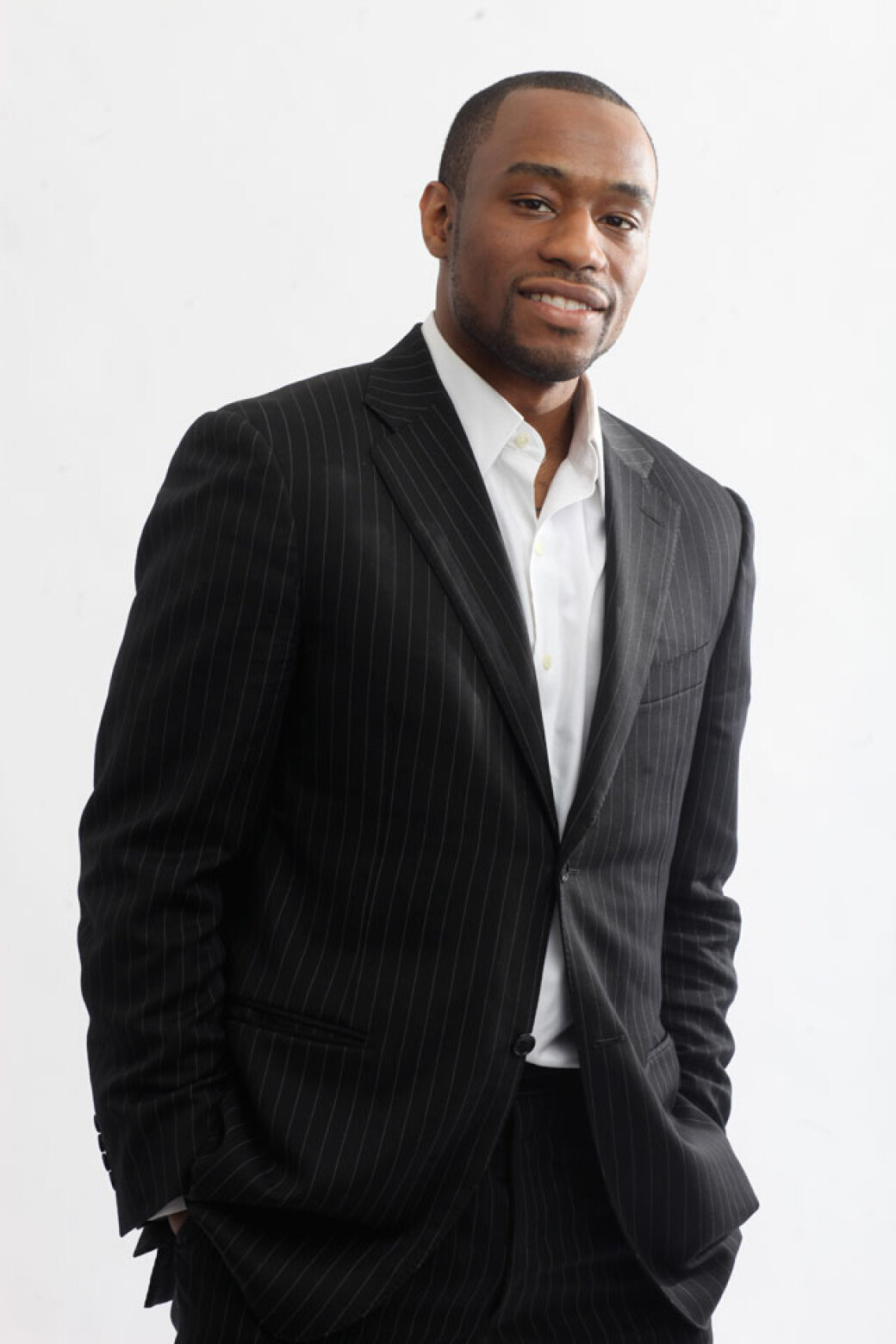 Photo credit: Courtesy Marc Lamont Hill
DOING THE WORK: For Marc Lamont Hill, there's no limit to the places and spaces in which he waxes academic. This week it'll be at A3C.
By Rodney Carmichael Wednesday October 7, 2015 04:00 AM EDT

Marc Lamont Hill certainly needs no introduction. But when the academic and critical media personality (formerly of FOX News and HuffPost Live; now CNN) kicked off his first year as Distinguished Professor of African Studies at Morehouse College with his Jay-Z/Nas course examining broader issues in hip-hop culture, it served as the perfect intro. In fact, it became the most in-demand class at Morehouse in the past decade, he says. When he makes his first foray to the A3C Festival & Conference this year, it should be equally captivating. That's because he's scheduled for a one-on-one sit-down with one of the most compelling and divisive figures in the culture today: Dame Dash. In preview of the main event, Professor Hill talked to Creative Loafing about the strides hip-hop has made in the academy, how he hopes to dig into value proposition beneath Dame Dash's provocation, and what was arguably the biggest beef of the year — and we ain't talkin' Meek Mill and Drake.

??
Beneath the hype surrounding Dame Dash's most inflammatory interviews over the past year, he's been saying some real stuff that seems more deserving of critical conversation than the media sensationalism. Is that how you intend to approach your A3C interview with him?

??
That is my intention. I've been a professional interviewer for a decade now and it's something that I take great pride in but also great interest in intellectually. There are moments where that becomes sensationalized because how can you not, right? When I sit with Future and he's talking about his relationship with Ciara, I can't help that that's sensationalized. I'm just asking a question and he took it somewhere I didn't expect, so that's the kind of answer you get. And again, I like Ciara and Future. But when it comes to Dame, I think the key is to not be distracted by some of the stuff that outsiders say to hype up an interview or hype up a comment he made. Because Dame has tremendous insight, tremendous experience. He's very smart and I want to hear his point. Not take the one line out of an interview that might make the Internet go nuts for five hours, but to get to the deeper thing. I want to understand how he thinks about creativity. I want to understand how he thinks about process. I want to understand how he thinks about entrepreneurship. I want to see how he thinks about ownership. I want to hear how he chooses his next venture — whether it's a clothing line or a film project. I want to see what that stuff looks like and feels like for him. And that, to me, is way more interesting than asking him, "When's the last time you talked to Jay-Z?" Which is kind of what everybody asks. He's talked about Jay-Z a million times. Let's deal with him as an artist, as an entrepreneur, as a creative, and see where that gets us. And for me that's going to be fun.

??
He's been real critical of "culture vultures" or people he feels are milking off of hip-hop. And he got a lot of ridicule over his critique that "jobs are for lazy people."

??
Yeah, I'll be honest, I found that troublesome. And I'm gonna ask him about it. At some point, it doesn't hold. I get the spirit of what he's saying, which is we need to own stuff. As someone who's been in media for over a decade, I wish I had gotten those lessons earlier. Because now I'm beginning to take ownership over projects, and produce content and own content.

??
Hip-hop has also been making a lot of gains in academia. It feels like the latest frontier within the culture, or the space where the most original thought is being produced. But has it been a fight for respect within the academy the same way it was inside the music industry early on?

??
I think there was a moment where we had to make the case. We spent 10 years, from '01 to probably 2011. Actually, let me go back further than that. Since the late '80s and '90s, academics have been making the case that hip-hop is worthy of scholarly study. Really from "The Message" forward. Or if you look at Do the Right Thing. When that comes out, we're examining Rosie Perez's body in that "Fight the Power" scene. We're examining Radio Raheem and making a connection between the two. We're checking out Public Enemy, we're critiquing Sister Souljah, we're analyzing NWA And then in retrospect we're looking at Grandmaster Flash, we're looking at Sugarhill Gang and we're situating them. I think hip-hop scholars are continuing to do rigorous work, first off, looking at hip-hop as an object worthy of its own analysis just 'cause, right? Hip-hop should be studied just like every other culture form. But, also looking at hip-hop as a window into other dimensions of our lives, other aspects of our world: How a conversation about hip-hop in Japan can help us understand globalization. How a conversation about a Jay-Z/Nas beef can help us understand masculinity in a different way. How a conversation about Drake and Meek Mill right now can help us understand authorship and the black literary tradition, and what it means for me to use someone else's words before I use my own — just like a black preacher. While that's not my primary project anymore, I continue to teach in this area and read and write in this area. And I'm excited to do that.

??
Let's go back to what was probably the biggest beef this year — Michael Eric Dyson vs. Cornel West.

??
(Laughs) I thought you were gonna say Meek and Drake, man.

??
I think the professors had the Internet going a little nuttier than Meek and Drake.

??
Do you think those kind of pubic disputes or disagreements — whether they're in an intellectual space like that one or between artists like Meek and Drake — harm the culture or keep it robust?

??
I don't think there's anything inherently wrong with engaging people in public. I think too often black people are like, "Don't do that in public!" As if there's a private black people meeting that we can all go to to hash this stuff out. It just doesn't exist, and it probably shouldn't. If I look at Drake and Meek Mill, for example, I would imagine that Meek wishes he had made a different choice now. And I'm sure that whatever decision he made to tweet whatever he tweeted — had he had the benefit of hindsight he may have made a different strategic choice — either to not send it or to have a bunch of music ready when he did send it. But in some ways he was a throwback to the old days where you'd put a battle rap out and you might get a couple of months before you hear a response. "Ether" didn't come out the day after "The Takeover." "The Bridge," "Kill That Noise," "The Bridge is Over," and "South Bronx," they didn't come out a week or two after each other. But the Internet has sped things up so, to some extent, technology has made the audience for disputes and debates and beefs different. There's something in anthropology we call time-space compression. And in the era of globalization, time and space move faster. We had pen pals growing up. Now you just write on somebody's Facebook wall. So there's a whole different way of engaging with someone.

??
So the public part isn't problematic to me, with regard to hip-hop. I think it's just a matter of understanding who your audience is and knowing what's at stake in this moment. With regard to intellectual beefs, I think similarly it's OK for us to have intellectual disagreements, and I think it's OK to hash them out in public. I largely agree with Cornel West's criticism of President Obama. But as I've told Brother West, whom I love deeply, I think the mode and tone of his critique of the president was unhelpful. It wasn't merely uncomfortable speech, it was uncivil speech to some extent. So I disagreed with Cornel just on some of the comments he made about the president — wanting to slap him upside the head. And the tone of his critiques of Melissa Harris Perry and Michael Eric Dyson in public made it somewhat reasonable for Michael Eric Dyson to want to respond in public. "Where you did it is where you get it," is what the old folks say. So I understood why Michael Eric Dyson would want to respond to Cornel West in public. At some point, though, I hope and pray that both of them connect behind closed doors and deal not just with the stakes of the debate itself but with maybe whatever more fundamental issues are there as well that come with being friends and colleagues and comrades for decades. I think they have the possibility to model reconciliation just as much as they were able to model engaged intellectual debate — in the same way that Jay-Z and Nas had the battle of the century, now they send each other Christmas gifts.