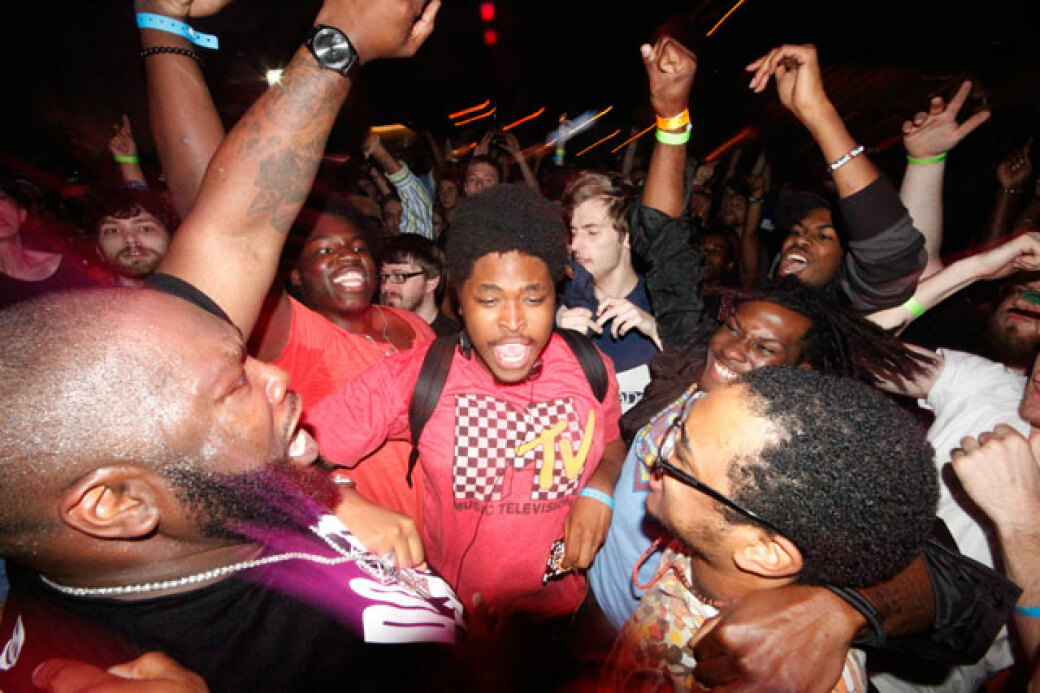 This year A3C is going big. For the ninth annual event taking place Oct. 2-6, some of hip-hop's heaviest hitters, including Questlove, Ghostface Killah, Schoolboy Q, Talib Kweli, 2 Chainz, Madlib, and hundreds more MCs and DJs from the East Coast, West Coast, and Third Coast are converging for a five-day marathon of true-school hip-hop happenings across the city. What started out as an underground mini-fest eight years ago has morphed into what is undoubtedly the largest hip-hop gathering in the country, and possibly the world.

Legends and newcomers alike are stacked high on this year's bill that features nearly 500 acts. The sheer volume of talent almost doubles last year's impressive roster of 300 acts. Last year's performances were mostly confined to the Masquerade's three indoor stages. But this year the homegrown music fest is expanding into about 25 venues in five neighborhoods.

"For us it's a scope issue," says festival co-founder Brian Knott. "The whole idea of creating a gathering place — a SXSW experience for people that are steeped in hip-hop culture — to come and have deeper dialogues, or to see some killer shows."

In 2005, Knott and his college buddy Kevin Elphick were hard at work releasing CDs and 12-inches via their upstart indie hip-hop label ArcTheFinger Records. After establishing various contacts with artists, booking agents, and promoters from around the country, Knott and Elphick found themselves making a lot of promises to outside acts. If they needed to land a gig in Atlanta, ATF had their back. In exchange, they asked that ATF artists (Psyche Origami, Minamina Goodsong) get the same support while on the road.

To make good on their end of the deal, Elphick and Knott invited everyone who'd helped them out across the country to come to Atlanta and play their underground hip-hop festival. The first A3C took place in March 2005 at the Loft in Midtown. It was a three-day fest featuring 30 artists.

"Times were tough back then," Knott says. "Our Director of Production, Andy Harrison, and I were laughing about this the other day — Andy was the stage manager back when we started, and we may have put on eight or 10 acts each day during the festival in the early days, and it seemed like such monumental undertaking at the time!"

Eight years later, the festival has become ground zero for hip-hop fans and music industry professionals. Last year's festival drew 25,000 people over three days. This year, an estimated 35,000-40,000 people are expected to attend the five-day event. For the 2013 edition, A3C is spreading out across the city with stages in Old Fourth Ward, East Atlanta, Little Five Points, Downtown, and Midtown. It's also broadened its reach to embrace a larger part of the hip-hop canon, but not at the expense of the festival's principles.

"This is not about saying there's no place for this kind of music or that kind of music here," festival General Manager Mike Walbert says. "It's about showcasing a cross-section of the culture on all fronts."

To accomplish that, A3C's organizers recruited an array of curators, including iconic hip-hop brands such as Rhymesayers Entertainment, Stones Throw Records, and Def Jam, as well as local DIY promoters such as Speakeasy Promotions and Perfect Attendance.

"If it weren't for the efforts of the individual curators, A3C wouldn't have seen nearly this much growth this year," Walbert says.

The festival will premiere director Jeff Broadway's documentary film Our Vinyl Weighs a Ton: This is Stones Throw Records. There's also a Heineken-sponsored mural project setting up in each of the neighborhoods where A3C is situated, and panel discussions at the Melia Hotel, including a series of tech talk pairings featuring Jermaine Dupri and James Andrews on the influence of social media on music, and the Dante Ross and Talib Kweli-hosted "How Technology Has Affected Artist Branding." On Sun., Oct. 6, "The Best Block Party Ever" will take over Old Fourth Ward with a cast of superstar DJs, including Questlove (the Roots), DJ Premier (Gang Starr), DJ Scratch, and more.

"We used to sit around joke about how cool it would be if we could one day get the Roots, Black Star, or Gang Starr to play at the fest," Knott says. "Aside from Public Enemy, who are still on the wish list, those were our big three dream acts to bring in for A3C," he adds. "Recently I looked at the schedule and it hit me: Questlove and DJ Premiere are here!"