From the underground to the world stage, the hip-hop festival's 10-year odyssey 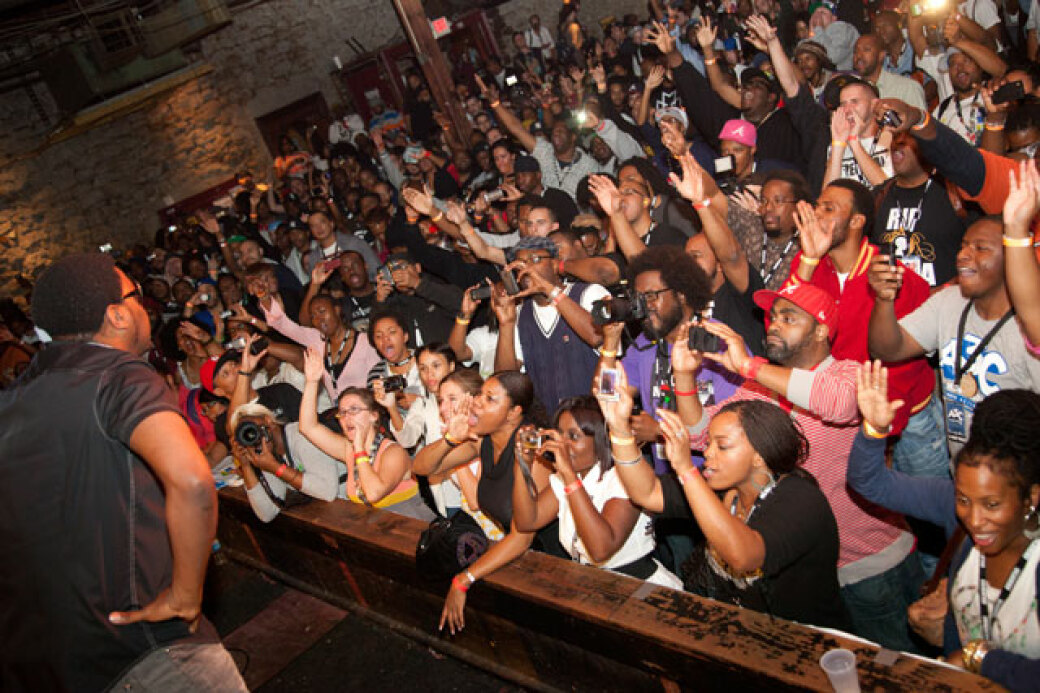 Photo credit: Dustin Chambers Photos
CROWDS AND POWER: This is what we talk about when we talk about hip-hop.
By Chad Radford Thursday October 2, 2014 04:00 AM EDT

When Brian Knott and Kevin Elphick launched the first A3C Independent Hip-Hop Festival in the spring of 2005, the idea was simple: Gather as many of the musicians, promoters, and friends they'd met through their now defunct hip-hop label, ArcTheFinger (ATF), for a hometown concert. Knott and Elphick owed a lot of people shows in Atlanta in exchange for booking the pair's artists in other cities. Organizing a three-day music festival at the Loft in Midtown was their way of paying everyone back.

When A3C returns to fill up music venues in Old Fourth Ward, East Atlanta, and Midtown Oct. 8-12, Atlanta's homegrown annual hip-hop festival and conference will be celebrating a landmark: its 10th anniversary. More than 500 artists including Black Thought of the Roots, Kool Keith, 2 Chainz, 9th Wonder, Masta Ace, Rakim, DMX, and a pairing of Juvenile and Mystikal are lined up to perform as part of the five-day blow-out. The festivities include a block party, film screenings, live art, and panel discussions with titles such as "Hip-Hop & Social Responsibility" and "Women in Hip-Hop." A3C General Manager Mike Walbert expects this year's attendance to nearly double last year's audience of 20,000-plus attendees who came from around the corner and around the world. All are drawn to A3C to take in the diverse array of hip-hop's musical and cultural inflections from the East Coast, West Coast, the Dirty South, and far beyond.

Over the last decade, A3C (All Three Coasts) has continued growing beyond its humble beginnings as a low-budget, regional showcase of independent musicians to one of hip-hop's most noteworthy gatherings. Even the Grammys gave A3C a nod as one of the 2014's "Top 15 must-see festivals." Such recognition is impressive in an era when massive musical gatherings such as TomorrowWorld, CounterPoint, and Bonnaroo dominate live music.

"We have been growing fast because people have a great time here, and they tell their friends," Walbert says.

Word of mouth is about as far as A3C's advertising efforts go, but its reach continues to grow. Refining the festival's footprint across the city each year has been a calculated move, according to Knott.

"During last year's festival I had a cup of coffee with a fan who had come to A3C from France," Knott says. "When he got off the airplane he was disappointed — he expected the airport to have a tribute to hip-hop, like a mural of OutKast on the sign coming up the escalator, or something. He was surprised that the city doesn't embrace hip-hop as one of our city's cultural treasures. It was an awesome conversation, and it changed my thoughts about why we need to be a citywide event. I hope that in a small way we're helping Atlanta embrace hip-hop from a broader perspective. It's such a part of our cultural identity to the rest of the world."

A3C straddles the line between festival and industry conference. It's a model similar to the one SXSW established 27 years ago. Whereas some artists might get lost in the shuffle at SXSW, A3C generally avoids festival overload by remaining tightly focused on hip-hop — its music, fashion, art, and philosophies.

"Our event is a gathering place for people who love hip-hop first and foremost," says Knott. "It started out that way, and we've kept the same sensibility about everything we do. It's a family reunion first, and a concert, a panel, and a business after that. As hip-hop grows and changes we change with it, because we are about the community of people who create hip-hop. We've never tried to force our will on what hip-hop culture is or should be, and we've been open to following hip-hop, presenting it very broadly, and respecting the culture."

A3C's four partners — Knott, Walbert, Andy Pitre, and Andy Harrison — leave booking the music, art, film, and educational content to a group of curators. Nationally recognized names such as Duck Down Records, Puma, and Talib Kweli, along with Atlanta locals Psych Army Records, DJ Jelly, and 2 Chainz's Street Execs label are among the 75 or so curators that have put together showcases for 2014.

Spreading out the booking duties among so many parties is an unorthodox approach, but it keeps the booking diverse. Many music festivals of A3C's size fall into a trap of pandering to larger, commercial-music-oriented audiences to make more money. A3C, however, taps directly into the community that fuels hip-hop culture.

"I have learned that the ultimate currency in hip-hop is authenticity," Knott says. "If you present yourself for who you are and do what you say you're going to do, people respond in kind, and great things happen."

Defining "great things" is a matter best left to the beholder. The diversity of A3C's lineup fosters debate over issues of aesthetics (what's unlistenable to one set of ears is beautiful music to another). Hip-hop scenes that normally would not overlap find common ground here.

"The thing I look forward to most every year is getting to see a lot of faces, many of whom, I only see once a year now," Knott says. "There are people like 9th Wonder, B.o.B, Young Guru, Beatminerz, Jean Grae, and so on [[[[[[[who] have been riding with us for a long time and [[[[[[[whose presence is] like having your family in town. As a Philly ex-pat I am really excited to have Black Thought here, who, to my ears, is in that conversation as one of the greatest MCs ever. More than any other year, this feels like a celebration, even more than an event, and I am looking forward to sharing that with lots of folks."