I love the South because it is mine.' 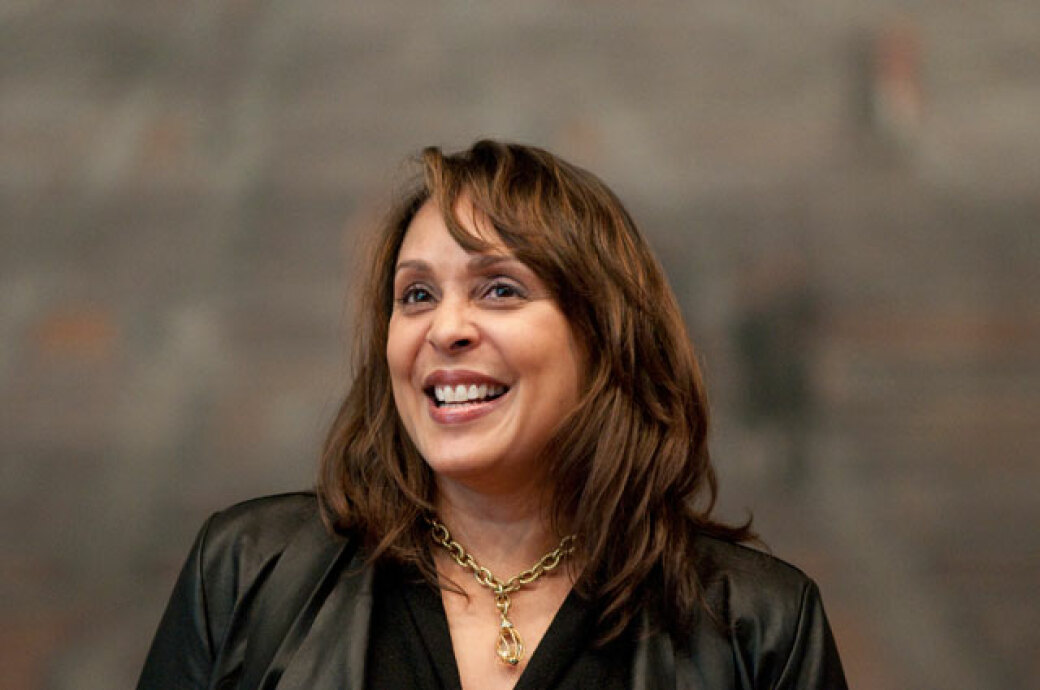 In August, Natasha Trethewey recited selected poems from her latest collection, Thrall, at Emory University's Schwartz Center for the Performing Arts. She was giving the Decatur Book Festival's keynote speech — her first public appearance since the Library of Congress named her the 19th U.S. Poet Laureate in June. Utter stillness engulfed the center's sold-out 800-seat theater as Trethewey rolled through her verses in a soft, melancholy lilt. The delivery was powerful and confident, and her voice contained only the slightest hint of a Southern accent.

Speaking on Emory's campus, where she's worked as a professor for more than a decade and now serves as the Creative Writing Program's director, Trethewey made her debut as the nation's preeminent poetry ambassador in front of a hometown audience. The late August evening represented a culminating moment for the Decaturite, the first Southerner to hold the position since Robert Penn Warren in 1986 and the first African-American poet laureate since Rita Dove in 1993.

The importance of Southernness and of race in Trethewey's life cannot be understated. They have come to define the biracial, Mississippi-born poet on both personal and artistic levels.

"I've always been aware that the South made me," she says. "I am the product of this place, as well as anyone from this place."

Much of Trethewey's poetry explores her personal experiences living below the Mason-Dixon line within the context of the South's overarching, historical narrative. She's immersed herself in understanding the region, and for better or worse, claimed the South as her own.

"It is my homeland and my native land," she says. "If I don't claim it, if I allow the people who ought to say that it is not really 'my place' because of race or something like that, then it renders me homeless. I'd have no homeland. I love the South because it is mine."

Trethewey was born in Gulfport, Miss., on April 26, 1966. Her mother, an African-American social worker, and father, a white Nova Scotian poet and professor, had married at a time when interracial marriages were still illegal in more than 20 states, including Mississippi. In a coincidental twist of fate, Trethewey's birth occurred on the centennial anniversary of Confederate Memorial Day. It's the kind of biographical tidbit that's impossible to make up, yet futile to ignore.

"To me, it seems like one of those great ironies that help to produce a writer, being born 100 years to the day that they first celebrated Confederate Memorial Day," she says.

When she was 6 years old, Trethewey moved from Gulfport to Atlanta, eventually settling in Decatur. She attended DeKalb public schools and lived with her mother and abusive black stepfather, who ostracized her for being biracial and regularly looked through her diary. Her mother divorced him after 10 harrowing years in an effort to escape the violent relationship.

But the torment didn't end. Following the relationship's demise, Trethewey's former stepfather unsuccessfully attempted to take her mother's life after beating her and repeatedly injecting her with a syringe full of battery acid. He spent one year in jail before being released, and, in June 1985, tried to kill her a second time. He was successful.

Trethewey was asleep when it happened, as she would later describe in her sorrowful ode, "Myth":

I was asleep while you were dying.

It's as if you slipped through some rift, a hollow

I make between my slumber and my waking,

the Erebus I keep you in, still trying

not to let go. You'll be dead again tomorrow,

but in dreams you live. So I try taking

you back into morning. Sleep-heavy, turning,

my eyes open, I find you do not follow.

Again and again, this constant forsaking.

At the time, she was living 65 miles away in Athens, Ga., and attending the University of Georgia. She vowed never to return to Atlanta.

"When my mother died, I was 19, and I said to myself that I would never come back," she said in a 2010 interview with Emory's Southern Spaces. "I never thought that I'd want to come back, that I would come back."

It took Trethewey more than 15 years to return to Decatur. When she finally did, she was an established poet and professor. Her debut collection, 2000's Domestic Work, had been honored with the Cave Canem Poetry Prize, and her follow-up, Bellocq's Ophelia, was already slated for publication. In 2001, she accepted a position as a Robert W. Woodruff Professor of English and Creative Writing at Emory University.

Coming back, however, wasn't easy. Trethewey moved within walking distance of the courthouse where her former stepfather was sentenced for shooting her mother to death. She not only had to re-familiarize herself with the city, but she also had come to grips with the psychological terrain of decades past.

page
"I moved that close to the place that I had left behind," she recalled in the Southern Spaces interview, "but it was completely different."

Soon, though, Trethewey started to feel at home again, as she became reacquainted with a city that, like her, had undergone vast changes.

"Atlanta had transformed a lot in the time since I had gone away and come back, of course because of the Olympics primarily," she says. "Downtown Decatur was an area I had been very familiar with when I was a child growing up. It had transformed into the lovely, quaint little town it is now with great restaurants, shops, and bookstores."

A literary scene had also sprouted, emerging alongside the Decatur Book Festival. First held in 2006, the event has since become the nation's largest independent book festival. The growth of the town as a budding literary hotbed helped attract writers and poets from outside the South, including three of Trethewey's favorites — Amber Dermont, Kevin Young, and Chelsea Rathburn — who all moved to Decatur after growing up outside the region.

"That was a really big difference, and I think the literary scene with the Decatur Book Festival — that just seems like something remarkable that helped to transform the culture of the place," she says.

The flourishing community allowed Trethewey to find her place, and as a poet, helped her finally tackle the looming subject of her mother's tragic murder. For nearly 20 years, Trethewey had attempted to write about her life-altering trauma. It wasn't until she started working at Emory, however, that she found herself able to convey the experience. Those poems became part of her Pulitzer Prize–winning collection, 2006's Native Guard.

In "Pastoral," one of the collection's finest poems, she vividly dreams that Robert Penn Warren and other Fugitive Poets inquire: "You don't hate the South? They ask. You don't hate it?" Trethewey evokes Atlanta's skyline as the poem's backdrop, which, like the rest of Native Guard, has enabled her to understand her personal experiences within the ever-evolving, yet complex, South.

"It's always been a love-hate relationship. It's the only home I have," she says. "I'm more interested in recovering parts of our shared history as Southerners and Americans that have been overlooked and telling a fuller version of American history."

This reconciliation has empowered Trethewey to staunchly claim her native land despite its historical blemishes. While she admires the South, Trethewey doesn't blindly defend it. Instead, she's worked to reclaim the area's tradition, which she believes skims over certain "erased" memories. As a result, she's taken it upon herself to depict some of the lesser-known stories, such as the all-black Union regiment that inspired her Pulitzer Prize–winning collection's title.

Georgia's former state flag, which incorporated the Confederate flag in its design from 1956 to 2001, was another point of interest for the poet upon her return to Atlanta.

"I refused to accept that," she says. "I thought this is just as much mine as it is theirs. I love the South, but I also want the American flag to fly over it."

In Thrall, Trethewey further investigates her biracial identity while challenging preconceived societal classifications, both in the South and beyond. In "Help, 1968," she recalls her mother being mistaken for her maid. In that poem — inspired by a Robert Frank photograph from his 1958 book, The Americans — she writes:

when my mother took me for walks,

she was mistaken again and again

for my maid. Year later she told me

she'd say I was her daughter, and each time

strangers would stare in disbelief, then

empty the change from their pockets.

Trethewey also elaborates on her relationship with her father, a longtime poet that has written about her for years. Thrall's opening poem, "Elegy," describes their intimate, and at times divisive, relationship. Another work, "Enlightenment," reveals the ways in which her white father would rationalize the inherent contradictions in Thomas Jefferson's beliefs about liberty while owning slaves.

In her first published collection as the U.S. Poet Laureate, Trethewey doesn't directly speak to her Atlanta experience. Nevertheless, she continues to address the same issues that have permeated her entire life, which has been informed by her time in this city.

"I think that there are ways that you can maintain a strong awareness of Southern history and Southern culture without being mired in what is bad about the past and what we need to leave behind about it," she says. "I also hate its violent history and some of its ongoing blindness and racism. And yet, to love a place like this is to want to make a place better."

page
Trethewey's unshakable Southern resolve has appeared throughout her first five collections and will likely remain prevalent in her future work. In January, Trethewey will temporarily leave her beloved South behind as she heads north to take up residence in the nation's capital. She'll be the first-ever U.S. Poet Laureate to take advantage of the Library of Congress' dedicated office for the honorary position. By doing so, she hopes to approach the opportunity "differently than had been done before."

"I'm actually in this situation to take up residency," she explains. "I'll be able to hold office hours for the public during the weeks that I'm there."

It'll be her first time living outside of the South in some time, but she isn't worried about missing the region as she fulfills her Laureateship's duties.

"I have fond memories of working on my last book, Native Guard, doing research in the library and then spending some time writing in the reading room there," she says. "I feel like D.C.'s not that far away, that I won't still feel a little of the flavor of South while I'm there. It doesn't feel so remote and removed from the South."

Regardless of how far she travels from here and how long she stays away, her Southernness will remain with her, as an inextricable part of her identity.

"It's the best kind of thing," she says, "to feel that history and write about the South, as a native daughter. It's what I was destined to do."