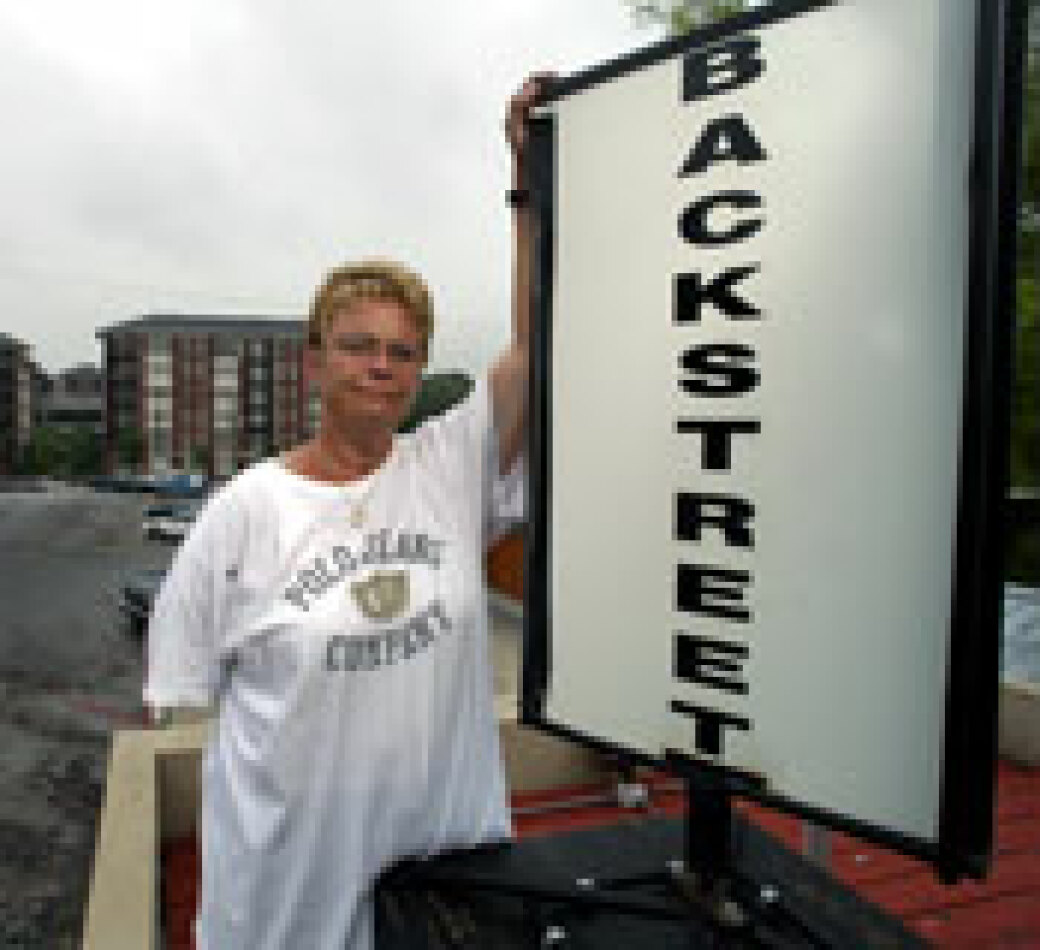 After nearly 30 years of running the city's storied, 'round-the-clock gay disco, Backstreet owner Vicki Vara is uncertain what the future holds for her Peachtree Street landmark.

But she realizes the situation is grim.

"Ever since we lost our status as a 24-hour club, the neighbors have been after us," says Vara, who co-owns the now shuttered club with her brother, Henry. "They say Backstreet is the epicenter for all street crime within a five-block radius. We've tried to work with them and get along with our neighbors."

Backstreet quit pouring alcohol Jan. 1 in favor of staying open all night and appealing a November court ruling that barred them from serving booze at all hours. But the Varas lost the appeal. Then, earlier this month, the club faced yet another obstacle — one that forced it to shut its doors, perhaps permanently: failure to obtain a "dancehall" license.

Elston Collins, one of Backstreet's neighbors and a board member of the year-old Midtown Ponce Security Alliance, which patrols in Midtown's residential neighborhoods, says he intends to do what he can to ensure Backstreet remains closed.

"Our quality of life has improved dramatically since Backstreet lost its liquor license," Collins says. "Before that, we used to have litter everywhere and hookers in our driveways. So we'll oppose any move that will return Backstreet to their previous status as a 24-hour nightclub."

Backstreet's problems started last fall, when the club — along with the Riviera in Midtown and Club 112 off Cheshire Bridge Road — lost a long court battle to retain their status as private clubs that were exempt from the city's bar closing hours. After the clubs lost their appeal, Backstreet continued to operate as a dry, all-night disco while Vara looked for a way to regain a pouring license.

This spring, the Varas submitted a proposal to allow Backstreet to resume serving drinks as a full-service restaurant. In observance of the city's new liquor hours, the restaurant-club would've locked the liquor cabinet at 3 a.m. and continued to operate until dawn as a disco.

The licensing board, however, never heard the proposal. On July 6, the Varas' application to transform Backstreet into a restaurant was rejected by the board after Councilwoman Debi Starnes showed up to oppose the club's request. At the hearing, the board refused to waive the club's previous license violations, which included a 2002 bust for illegally selling nitrous oxide canisters or "whippits" to club patrons.

"They've got open drug dealing and prostitution in their parking lot," Starnes says. "It's not just new neighbors coming in who don't like them. They've had complaints from old neighbors, city officials and business owners."

By contrast, the board unanimously endorsed an expansion plan by Blake's, another well-known gay bar a few blocks away on 10th Street.

Collins, who's lived on nearby Myrtle Street for seven years, says the Midtown Ponce Security Alliance opposed the Varas' proposal because he claims the Varas had no real interest in operating a legitimate restaurant.

"We met with them three times and they didn't even have a real business plan," he says. "It was just a way to regain their 24-hour status and serve alcohol."

A few days after the licensing board meeting, in the wee hours of July 17, the club was raided by police, who cited the owners for operating a dancehall without a license, and jailed the acting manager overnight.

City code defines a dancehall as a place that offers all-night dancing but doesn't serve or allow alcohol on premises. (In June, City Council closed a loophole that had allowed some local nightclubs to serve drinks until 3 a.m., close the doors for 15 minutes, then reopen as an all-night, alcohol-free dancehall. A new ordinance mandates that nightclubs must close at 3 a.m., period.)

After the bust, the Varas immediately shut down the club. Vara says their failure to get a dancehall license was an oversight, but she isn't sure they'll apply for one. After all, that application would again be heard by the city's licensing board, which already turned Backstreet down for the restaurant license.

Starnes is not exactly sympathetic.

"I know Backstreet and its patrons must think I'm evil," Starnes says, "but the point where I'm coming from is 10 years of cumulative disrespect for the neighborhood. I think they've used up all their chances and goodwill with everybody."

Did you know that the earliest Russian vodkas were flavored with fruit? Or that rum was overtaken in popularity in the U.S. by whiskey only after politically motivated embargoes made it difficult to import? Or that the curacao citrus, from which the popular, orange-flavored liqueur is made, is actually green, wrinkled as...

Fernet Branca — it's what's for breakfast. At least, it is at Tales of the Cocktail.

If you can't imagine waking up with the pungently bitter Italian amaro, I'm with you. As I stepped onto the elevator of the Monteleone Hotel in New Orleans shortly after 9 a.m. last Friday — soon to be joined by a woman already lavishly trashed...

Why Atlanta's mayor cares so much about improving another city's port | more...
Search for more by Scott Henry