In Old Fourth Ward, a 32-year-old man returned home and found a woman standing near the rear of his house. "As he exited his vehicle, the female went into the brush and either grabbed something from, or threw something to, the ground," an officer wrote. "She then started running at him and screaming in a 'high pitched, almost animal-like' manner. The female shoved him and started to scratch him over his clothes. She then moved away, continuing the same animalistic screams. The female [tried] to advance on [the 32-year-old man] again, but then fled north."

The high-strung woman wore black pants and a heavy brown winter coat. The man said he didn't recognize the woman, but based on her behavior, she may have been on some type of narcotic.

A woman told police she posted some shoes for sale on Craigslist and a man responded and agreed to buy the shoes if she would meet him at a local tattoo parlor. The woman drove to the tattoo parlor and her buyer appeared: a man with a Donald Duck tattoo on his left forearm. Unconvincingly, the man claimed he owned the tattoo parlor. Then he walked inside the parlor, spoke to an employee who appeared not to know him, and arranged to return for a new tattoo the next day. Then he swiped the woman's shoes and left in a black Mercedes.

A 25-year-old man was involved in a conversation with a male stranger wearing a gold San Francisco 49ers jacket at a local dive bar. A cop noted, "[The 25-year-old] stated the conversation was regarding a dance, which was being done by the suspect, in which the 25-year-old recognized as a dance that is popular in the Bay Area of California."

Apparently, dancing wasn't the only thing on the stranger's mind. The 25-year-old left the bar and hopped into his car. Suddenly, the man in the 49ers jacket alledgedly opened the passenger door, pointed a gun at the 25-year-old, and said, "Give me your shit." The 25-year-old handed over his wallet, $300 cash, and his cell phone.

The 25-year-old was able to give police a detailed description of the dancing bandit since they had chatted on the dance floor for several minutes. The man claimed nothing in their dance conversation was hostile.

How to get fired

A 27-year-old boss who owns an event security staffing company told police his group was hired for a special event at a local bar. Toward the end of event, the boss witnessed one of his employees engaged in sexual activity with a female on the back patio area of the bar. The owner told the bar manager about the coupling on the patio and said he was going to suspend his employee for inappropriate mingling.

After everyone left, the employee alledgedly walked up to his boss, pushed him, and said he heard the boss was going try to fire him for the patio pairing. The suspect continued to "push and antagonize [the boss] as he was going to a vehicle," a cop noted in the police report.

While pointing the gun, the employee tried to pull his boss from the car so they could fight. Apparently, the employee fired a round of bullets into the air. The rowdy employee fled before police arrived, but the boss wanted to press charges.

In Midtown, a 26-year-old woman returned to her apartment to a bizarre scene. "Her room was a mess," a cop noted. "There was a [broken lamp], a glass broken over her bed ... and one of her paintings was taken."

The 26-year-old claimed that while she was at work, her female roommate entered her bedroom and made the mess. Apparently, the two women had quarreled earlier and the accused roommate started drinking.

The cop noted, "As she was cleaning off her bed, there was a knife laying on top of her matters that was not there when she left for work." The 26-year-old told police she's going to stay with a friend and try to get her roommate evicted. 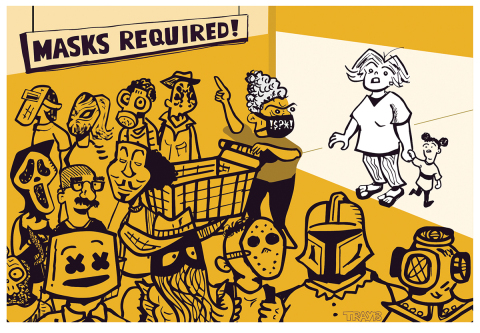 Spider for The Blotter: Feral freak-out