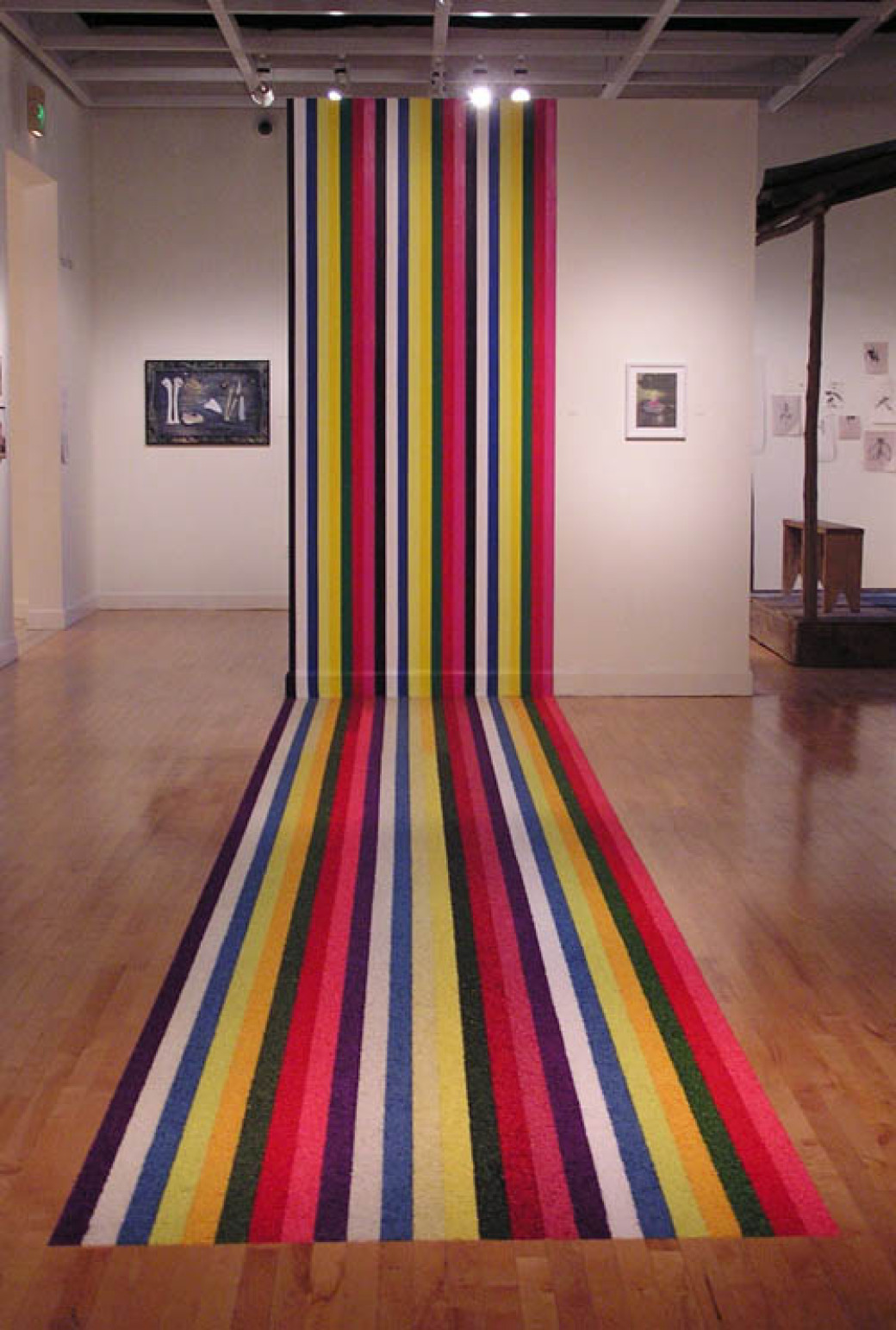 When Roswell artist Gyun Hur is asked about the $50,000 art prize she just won, the first thing she does is laugh uncontrollably. The next thing she does is call the prize "a great honor" and say that she's still adjusting to winning. Last week, the petite 27-year-old Korean-American installation artist with the burbling laugh was named the winner of the Hudgens Prize, an unprecedented cash prize created for a Georgia visual artist. The award, which was sponsored by an anonymous family foundation, is administered by Duluth's Hudgens Center for the Arts.

Although Hur is small in stature, she makes a big, bold impression with her artwork. She's most well known for her meticulous installations of arrow-straight, colored stripes rendered at various scales from shelf-sized to the full extent of a gallery. Hur forms the stripes from discarded silk cemetery flowers painstakingly cut into tiny pieces and arranged by hand. For her installation at the Hudgens Center, she extended the gallery-length, cut-flower stripes up one wall using matching paint and included a photograph and music. The colors are all familiar enough - primary red, royal purple, forest green - but combined in idiosyncratic patterns that seem to imply codes or a private language.

In fact, the stripes are a kind of private language. The patterns and colors derive from her mother's wedding blanket, or hon-soo i-bul. According to the artist, in Korean wedding tradition, a blanket is prepared by the bride's mother as a gift for the couple on their wedding day. Hur intends these stripes as a reference to that bit of family culture, as well as to her own experiences of loss and trauma from her youth.

Hur's family immigrated to the United States from Taegu, South Korea, when she was 13. The language barrier she encountered upon arrival to the U.S. left an indelible mark on the artist and her work. "I grew up as a very verbal person," says Hur, "so not being able to speak [English] really shocked me. I had to focus more on visual languages."

Hur put that interest in visual languages to use, getting her bachelor's degree in painting from the University of Georgia. After a year off, Hur continued her studies, taking up sculpture at the Savannah College of Art and Design in Atlanta. She received her MFA last spring.

Hur switched from paint to shredded flowers out of a sense of urgency for experimenting with new kinds of media. "I don't think I picked up a brush my entire time [as a graduate student]," she confesses. She's also adapted the work to a performance setting, using her entire body to destroy her delicate installations.

The meaning of her work continues to evolve. The flowers used to symbolize loss and memory, she says, but over the two years she's been working with the unusual material, new layers of meaning have emerged. She's eager to highlight the work's form in addition to its content. "I'm wanting to talk a little bit more about aesthetics and labor and process," she says.

Hur is also thinking a lot about using her art to continue exploring her adopted country and her adopted region. "As an immigrant daughter, as a minority woman, I'm trying to see where my place is in the midst of discussions about being in the South. [The discussion is] usually about being white and black. But I'm in the middle," she says.

"I know from my conversations with my Asian friends, they feel they either have to completely assimilate to mainstream culture here or stay in a very separate entity of just the Korean community or an ethnic community." But Hur sees herself as a kind of cultural emissary: "I feel like I am able to travel in between [the Korean community and the mainstream]." In part, Hur sees the award as a positive effort to strengthen ties between the Korean artist community and the general public - something that's been an ongoing concern of the Hudgens Center due to Gwinnett County's large Korean population.

The Hudgens Prize was intended to be a life-changing grant for a Georgia artist. Hur is certain that her life will change, but is cautious about using the money wisely. "I know it was a matter of trust for the judges to invest in such a young artist. I do have to be accountable in a sense. I feel that there are a lot more eyes watching now. It's not just about a single artist and not just about $50,000."

For now, Hur's happy just being part of what she sees as a renewed energy in the Atlanta art community while she lets it all sink in. "I'm still in awe," she says. "It just dropped out of the heavens."