Beef Wellington is intended to be a show-stopping dish, a chef's way of showcasing his or her technique. It has many components. Filet mignon is the foundation. Pâté de foie gras and mushroom duxelles are the mortar between the meat and the golden puff pastry that encases everything. If any of these textures or ratios is off — if the steak is overcooked, the pastry gets soggy, or there isn't enough mortar to hold the savory jelly roll together — the dish falls apart.

At Marcel, Ford Fry's Westside steakhouse located in the old Abattoir space, the printed menu lists beef Wellington in its own fancy box. A large portrait of the Duke of Wellington, for whom the dish is named, hangs near the dining room's entrance. When you order the delicacy, which requires 24 hours advance notice, a pee wee football-size Beef Wellington is presented tableside with great pomp and circumstance before it is whisked away to be sliced.

When ours returned, the golden loaf had been transformed into a tangle of gray and brown matter. The spiral of overcooked filet mignon wrapped in grainy mushroom duxelles and the puff pastry was sloppy and flaccid. For $55 per person and 24 hours advance notice, this dish was a letdown. In some ways, the disappointing experience was a fitting mascot for Marcel. Fry is one of our city's most prolific restaurateurs — he opened five restaurants in 2015. But his speed to market with Marcel, which opened in June just three months after Abattoir closed, may have been too ambitious. The six-month-old restaurant promises greatness at a hefty price, but fails to deliver.

There are many French hallmarks on Marcel's beef heavy menu. Executed by chef Brian Horn — one of Fry's long-standing chefs within the Rocket Farm restaurant group, most recently at JCT. Kitchen — expect dishes such as oysters, escargot, and sole meunière. Among French-leaning sides such as the creamy but bland dauphinoise (a kind of potato gratin) and aligot (potato purée thickened with cheese), there are random Italian accents such as cacio e pepe (pasta with pepper and cheese) made with thick bucatini noodles and a dish of faultless spinach and ricotta gnudi dumplings. 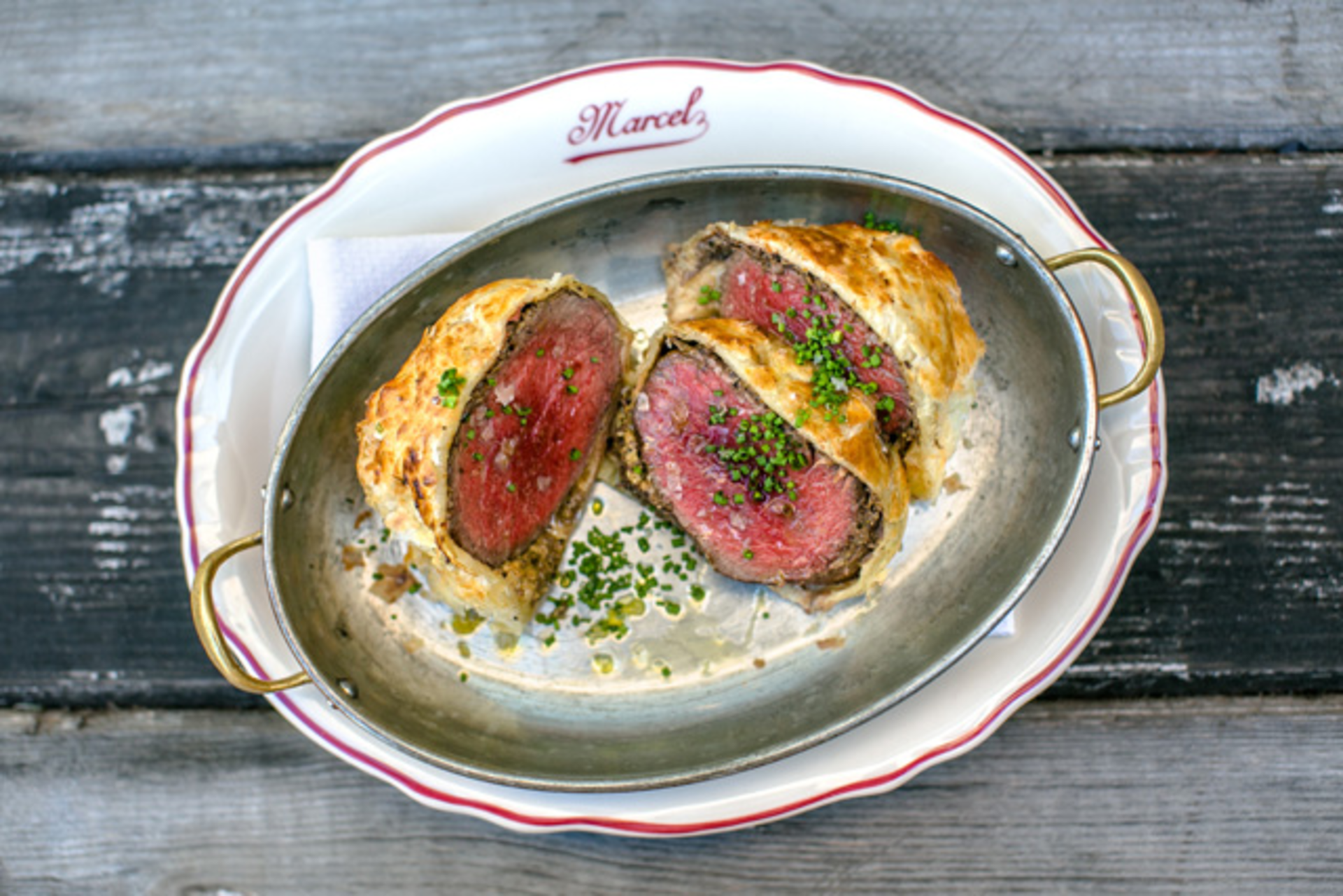 A starter of steak tartare was tangy with acid. Instead of toast points or some sort of bread, floppy fried potato disks accompanied the chopped steak. The escargots, which arrived in their shells, were drenched in a clumpy broken butter sauce that tasted strangely of fuel — maybe from being too close to the flame of a Salamander grill? A salad of shrimp Louie turned out to be a jumble of mealy, out of season tomatoes and pungent rubbery shrimp.

At its core, Marcel is a steakhouse. The menu includes interesting cuts such as côte de boeuf, a filet madame, bone-in filet monsieur, a 42-ounce porterhouse for three, and a pleasantly gamey entrecôte served with pesto-like sauce verte drizzled on top and crisp homemade french fries piled high on the side. The New York strip was a perfect rosy medium rare with a blackened crust. Although most come with a nice crust and a seductive hint of smoke, the steaks' price tags border on outrageous. Fry says the cost is due to the high quality of the dry or wet aged steaks he sources from Meats by Linz in Chicago. That 16-ounce New York strip will run you $67.95, and the Porterhouse is $164.95. Interestingly, Fry's initial menu pricing drew criticism from Atlanta magazine food editor Evan Mah. Fry subsequently reduced the pricing to something more on par with Chops or Kevin Rathbun Steak. Even so, Marcel's dependable entrecote and fries for $29.95 is probably the safest bet unless your boss happens to be picking up the check.

A sole meunière was so dry that no amount of caper butter sauce could save it. On the other hand, an enormous veal Parmesan with bubbly cheese and a crisp crust was superb.

Dessert at Marcel is a bright spot. The baked Alaska with graham cracker ice cream and hot fudge delighted my table as a magical blue blanket of flame engulfed the marshmallow meringue. Other desserts were conceptually flawless, but service errors were their downfall. A mille crepe cake with blueberries, brown butter, and thin crêpes bound by smooth mascarpone was brought to the table too cold and stiff instead of being allowed to relax at room temperature. A moment more would have let the crêpes' supple texture shine.


At Marcel, there is elaborate gold and black wallpaper covered with big city references such as parking meters, pigeons, and fire hydrants. This sweeping, dark, industrial space requires an excessive amount of decor to feel warm. The design incorporates lots of leather and wood, vintage boxing memorabilia, and other bric-a-brac. This more-is-more design approach worked at Fry's cavernous casual Tex-Mex restaurant Superica, but at Marcel the clutter suggests an eccentric aunt and uncle's house more than a high-end eatery.

The bar at Marcel reminds me of the hotel bar in The Shining. It's dark and luxe with gold accents and an illuminated ceiling covered with boxing photos set into makeshift square picture frames. I like how attentive and smartly dressed the barkeeps are. They also make a perfect classic daiquiri and know their way around the clever wine list, which runs from gamay to chardonnay with a balanced and diverse selection of vintages.

There is constant movement around Marcel's dining room, which is packed with various service staff in various types of uniforms. The crowd makes the vibe more frenetic and disorganized than serene and controlled, as any white-tablecloth restaurant should be. Waits for a reserved table can climb to 15 minutes while the restaurant is empty and I've had a few, shall we say, brusque interactions with servers who just seem too stressed to be hospitable.

For the $300 it cost my party of three to dine at Marcel, I expected more precision from both the service and the food. I could easily blow it out at any other steakhouse where consistency across the board would ensure a fulfilling experience. At this price point, however, dining at Marcel is a gamble. (2 out of 5 stars)